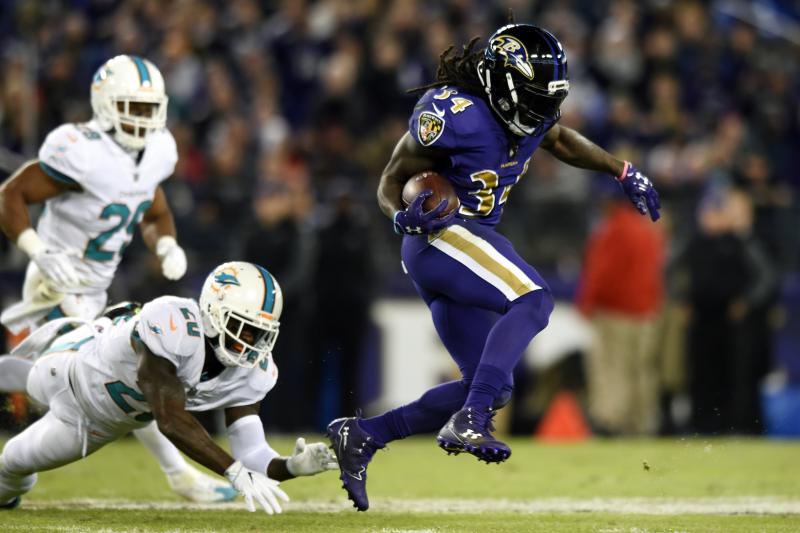 Eric Himmelheber is a big fan of Baltimore Ravens running back Alex Collins. Collins was a newcomer to the Ravens organization, after spending his first season with the Seattle Seahawks.

You brought a bright spot to this offense that was desperately needed this season. After unfortunate injuries to your teammates Danny Woodhead and Terrance West at the beginning of the season, you emerged from the depths of the Ravens practice squad to become the league’s 11th leading rusher.

Despite being a top high school recruit, the 2013 SEC Freshman of the Year, and putting up three 1,000+ yard seasons at Arkansas, the last of which you scored 20 touchdowns, every team still passed over you in the 2016 NFL draft until the Seahawks finally drafted you in the 5th round (171st overall). The Seahawks, now in regret, released you just one year after being on their team.

In your first full season with the Baltimore Ravens, you managed to shock us all.

This past season you ranked 4th in the league in yards per carry (4.6). You ranked 10th in yards per game (64.9) and were tied for 6th most in rushing touchdowns (6). You also had the 7th most first downs (51) this past season. And despite the Ravens being ranked 15th in league in 1st downs per game, you had the highest 1st down% (24.1) out of any running back in the entire league. (Stats based on min. 200 rushing attempts)

If those stats didn’t wow us all enough then let me put your season into perspective. Jamal Lewis had six rushing touchdowns his rookie year with 97 more carries than you did. You also managed to average more yards per carry than Ray Rice and Lewis did in their first years as Ravens.

You not only won our respect for your play on the field but also Irish danced your way into our hearts off the field as well.

Never stop doing the things you love because someone else doesnt agree. chase your dreams Carl and don’t let them stop you from being great! https://t.co/T4MI6QQe3h

This off-season you are exclusive rights free agent. And that means your contract has expired while you have had three or fewer tenured years in the NFL. This leaves the Ravens in a position to offer you a new contract, or not, by the imposed deadline or else you become a free agent.

I can guarantee you, Alex, that Ravens fans do not want you to leave. As you may have seen this past season, a lot of fans denied making their way to see the Ravens play for multiple reasons. But don’t take that into account if you’re on the fence about coming back to Baltimore. Even those fans who stayed at home all agreed you are the Ravens’ next franchise running back. And as always in the sports entertainment world, fans will flock to see their team’s next superstar.

You scored your first touchdown with the Ravens against the Green Bay Packers on the most historical field in the NFL.

You reached over 100 yards twice this season. And if it wasn’t for your career-high 120 yards against the Steelers in Week 14, we would have never had a chance to win that game in the first place.

If you end up remaining a Raven for years to come, I’ll be eyeballing my next Ravens jersey as will many others. You are loved all throughout Baltimore and with good reason. Sorry, this season had to end on such an unfortunate note but all Ravens fans are in agreeance that you are the definition of what “play like a Raven” truly means.

I hope to see you one day and personally catch a couple words with you before a practice or game. Have an amazing off-season, Alex. You definitely earned it. And best of luck with whatever comes your way next.