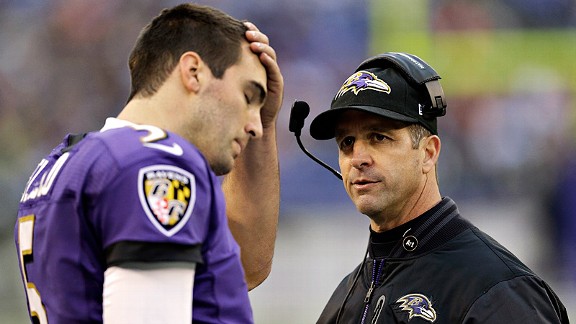 Ahh, we can start at the disgusting lost to the lawless Cincinnati Bengals. Even with them being an AFC division foe, this game was very winnable for the Baltimore Ravens.

Nevertheless, the Ravens find a way to make easy games tough with slow starts. In a game where all you need is one win to get in the playoffs, this team didn’t show any intensity. During the defeat to the Bengals, the performance showed everything that’s wrong with this team and what needs to improve.

The passing offense is one of the worst in the NFL and Joe Flacco is going to need more playmakers. If it wasn’t for “diamond in the rough” Alex Collins, this offense could easily be the worst in the league. The draft and free agency will let fans know if this organization is ready to put time and money into the offense. Or will they keep going to rest their laurels on the defense, whom couldn’t led the team to the playoffs this year.

Great championships start at the top with good GM and coaching decisions. The Ravens haven’t made many good ones in recent years leading to three straight years out of the playoffs. General manager Ozzie Newsome along with Assistant GM Eric DeCosta need to take blame for this poorly built team. With the game on the line, only two receivers were healthy when Baltimore needed a touchdown to win the game. The team’s first-round pick at wide receiver was left inactive while healthy which leads fans to think why draft him and refuse to play him. Bad is bad, and yes Breshad Perriman has been bad, but they could’ve used him to have more healthy playmakers.

The head coach has already stated Mornhinweg will be back and couldn’t disagree with the call more. Let’s go back to a play which describes the playcaller perfectly. Third-and-7 on the Baltimore 49-yard-line, Mornhinweg calls a screen which goes incomplete as the Bengals sniffed it out. The Ravens now have to punt with about 2:38 left on the clock up by three points. Now, the Bengals have plenty time to go down and score, which they do. Instead of letting Flacco find an open receiver, the screen play call negates the various of options you could have and leaves the QB with only one.

On the go-ahead touchdown drive before this drive, Flacco threw for 37 out of the 45 yards including the seven-yard touchdown to Mike Wallace. The aforementioned drive could have closed the game with a touchdown, or a field goal there would mean another field goal could win the game on the last drive. This is just one of the many fails Mornhinweg has had in his situational play calls and with this move to keep him, more are to come.