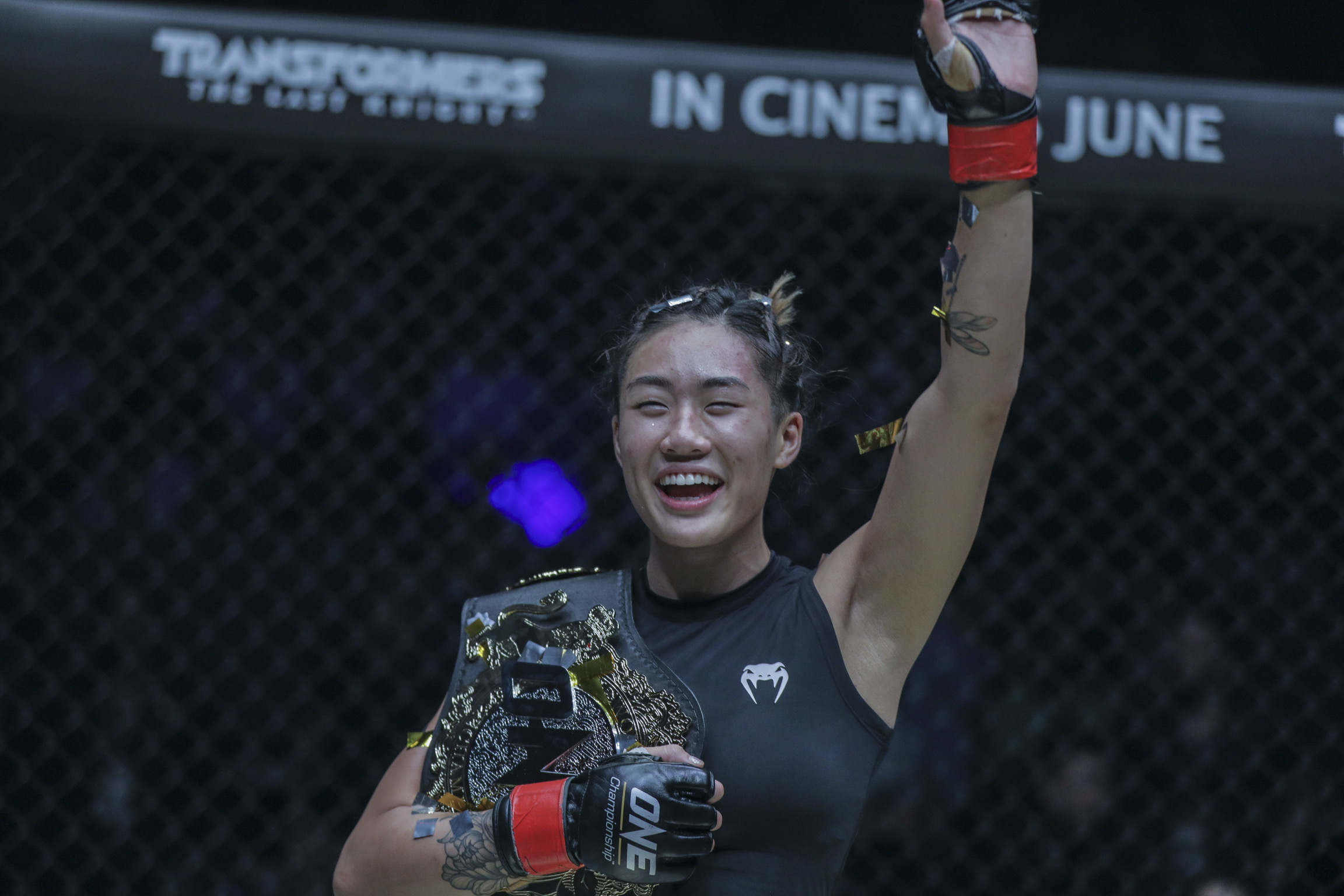 Angela “Unstoppable” Lee is arguably ONE Championship‘s most valuable asset and one of the sports most talked about young international superstars.

FOX Sports 96.9 FM/1340 AM‘s Dean Perretta caught up with the most talked about female Mixed Martial Artist in Asia and current reigning and defending undefeated ONE Championship Women’s Atomweight Champion Angela Lee to inspirationally discuss her most recent successful title defense, as well as the biggest obstacles which the very talented 20-year-old Vancouver-born sensation has overcome in her professional career, coupled alongside life growing up in Canada and Hawaii, dealing with the major expectations and pressures of international press, training at Asia’s globally revered martial arts academy Evolve MMA and much, much more only on FOX Sports 96.9 FM/1340 AM.

Q: First and foremost Angela, you most recently defeated Istela Nunes in the second round via an anaconda choke at ONE Championship: Dynasty of Champions inside the electric Singapore Indoor Stadium. What are your thoughts on the triumphant victory and of course the passionate Mixed Martial Arts fans in Singapore?

I was overjoyed with my victory and my second successful title defense. The MMA scene in Singapore has exploded. The amount of love and support I received from the local crowd was insane and the energy with each event increases more and more! It’s so great to see the progress and to know that I’m apart of it.

Q: ONE Championship is officially Asia’s largest-ever sports media property in history with a global audience of over 1 billion homes across over 118 different nations courtesy of ONE Championship airing live domestically and internationally on FOX Sports, Setanta, ABS-CBN, MNC and OSN to name a few. How paramount is it for you Angela to be the face of ONE Championship for many years to come as well as cementing your legacy in Asia?

One of my main goals is to help promote Women’s MMA, especially in Asia. I feel like it is my purpose to be a role model and spokesperson for women and young girls and I would like to help give them more opportunities to do what they love and chase their dreams.

Q: As arguably ONE Championship’s most valuable asset and one of Mixed Martial Arts’ ever-rising international young superstars, what have been the biggest obstacles that you have had to overcome in your professional career?

One of the biggest obstacles that I overcame was preparing for my second world title defense while dealing with a lung infection. There’s never a perfect fight camp and there’s always different mental and physical challenges. This one was one of my toughest challenges, as it caused me to doubt my ability to perform. I was able to cope with the pressure and doubt by trusting in my Coach, my team and in my preparation. Many times, I doubt myself but the people closest to me always give me the strength and reassurance.

Q: Born in Vancouver, British Columbia you subsequently moved to Hawaii at age seven. What are your recollections of life growing up in Canada and Hawaii?

Growing up, life was great. My family was always together and thinking back, I can only recall happy thoughts! I have really fond memories of my early childhood in Canada. School was fun and after I’d always be on the mats in the gym because my parents owned multiple martial arts schools. My transition when I moved to Hawaii was very smooth. For the rest of my childhood, I stayed in Hawaii and I’ve been there ever since! I absolutely love it here. I fell in love with the people, the culture, the diversity and the beautiful beaches and mountains. My mom and dad continued to teach my brother and I martial arts and it was here that I began competing in more tournaments and competitions.

Q: Currently undefeated with a record of 8-0, how have you managed to remain intensely focused irrespective of all of the international press coverage and high expectations?

I constantly remind myself of how grateful I am for this amazing life that I’m living and when I do that, everything is a lot easier to deal with. It also helps that I really love what I do! So I don’t really mind all that comes with it.

Q: At present, you train at Evolve MMA who were named as the Best Instructor Team In Asia, Best MMA Gym In Asia, Best Fight Team In Asia and also the Best MMA Camp In Asia to name a few. In addition, Rafael Dos Anjos, Roger Gracie, Renzo Gracie, Kyra Gracie, Dan Henderson, Rich Franklin, Ben Askren and Shinya Aoki are amongst the likewise marquee MMA superstars who have also trained at Evolve MMA. In your opinion, what separates Evolve MMA from other Mixed Martial Arts training academies around the world?

Evolve MMA is a unique gym, unlike any other in the world. From the world class fighters and coaches to the accommodating class schedules to the world class facilities and multiple locations. Evolve MMA is the dream gym for all. People from all different walks of life; professional fighters, fitness enthusiasts and even children are all welcomed and treated with the utmost care.

Q: Speaking of Evolve MMA, acclaimed Thai Business Entrepreneur Chatri Sityodtong was officially named as The Most Powerful Person in Asian MMA and the Most Influential Executive In Asian MMA by Yahoo! Sports and Forbes. What are your thoughts on the influence of Chatri Sityodtong and his contributions to Mixed Martial Arts in Asia?

There is no doubt about it, Chatri Sityodtong is the man who revamped martial arts in Asia. With Evolve MMA and ONE Championship, he opened the door for modern MMA in Asia and now it is on a whole ‘nother level.

Q: ONE Championship has the potential to become the biggest Mixed Martial Arts organization in the entire world and has consistently delivered for its loyal legion of fans around the globe. What are your thoughts on ONE Championship’s unique international appeal?

ONE Championship is building so much momentum by pulling in world champions from multiple traditional arts; karate, Muay Thai, wrestling and BJJ as well as the new generation MMA in their search to find the best fighters throughout the entire world. They (ONE Championship) are undeniably the most exciting MMA promotion today. ONE Championship is an organization unlike any other.

Q: As a Brown belt in Brazilian Jiu-Jitsu and first degree black belt in Taekwondo, what areas of your already polished game are your currently looking to improve on at this moment in time?

There is always room for improvement and I am always working hard to sharpen all my tools. Being able to stay humble and hungry and constantly evolve is what I strive to do as a fighter and champion.

Q: Last but not least Angela, what words of advice do you have for kids in Asia and overseas who dream of one day becoming a professional Mixed Martial Artist?

I would like to encourage them to keep training hard and to never give up. Be fearless in the face of adversity. Resilience leads to victory. Visualize your goals, fight hard for your dreams, and you will achieve them.