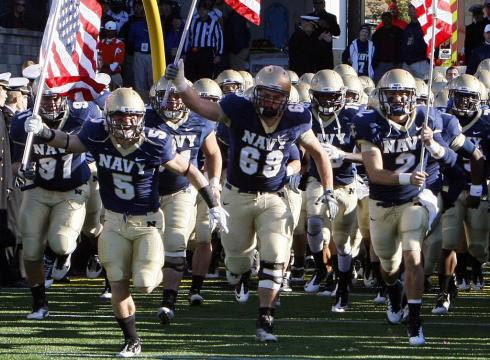 Neither team has won its conference’s championship … yet.

That will change Saturday when the #19 Navy Midshipmen host the Temple Owls to decide the winner of the American Athletic Conference title.

What to Know About Navy:

Both teams feature a potent offense, relying primarily on rushing. However, the Midshipmen’s rushing attack is one of the most dominant in the nation. Navy averages 342 yards on the ground per game, which is second only to the New Mexico Lobos.

Quarterback Will Worth leads the Midshipmen’s triple-option offense with 1,181 yards rushing. Behind Worth, Navy uses a committee of rushers led by fullback Chris High to keep their legs fresh. This system allowed five Midshipmen to amass 397 yards or more on the season. Altogether, Navy averages six yards per carry, ranking seventh in the Football Bowl Subdivision.

This run-first offense continuously led to high scores for Navy. The Midshipmen have scored 42 points or more in seven of their 11 games. Their average of 41.9 points per game is good for 11th in the FBS.

One of the drawbacks about Navy’s offense-oriented team is their patchy defense. With this fault, the Midshipmen have surrendered 27 points or more in their last eight games. If Temple can expose Navy’s defense with their rushing attack, another shootout could be in store for the Midshipmen.

What to Know About Temple:

The Owls also have a strong rushing game. They split carries between running backs
Jahad Thomas and Ryquell Armstead. The duo has rushed for 856 and 842 yards, respectively. The two have also combined for 25 touchdowns this season. However, Temple could struggle to establish the run, as Armstead’s status is doubtful this week, according to Matt Vender of OwlScoop.com.

Another advantage for the Owls is their balanced attack. Temple Quarterback Phillip Walker has thrown for 2,700 yards, nearly doubling Worth’s 1,363. Walker averages 225 passing yards per game, while Worth averages 124. If the Owls struggle without Armstead, their senior quarterback should be able to carry some of the load, whereas the Midshipmen cannot survive without the run.

Finally, and most importantly, Temple has a shutdown defense. Their average of 17.8 points allowed per game ties the Owls for the tenth fewest in the FBS. Furthermore, Temple allows the 24th fewest rushing yards per game in the FBS. If this stinginess holds true Saturday, Navy could struggle to find their offensive punch, creating a grinding game for the Midshipmen.

No matter how good Temple’s defense is, Navy’s rushing attack is better. It will be nearly impossible to stop a team that ran for 496 yards last week.

The Owls will still run the ball well, but without Armstead, Thomas’ production will eventually slow, allowing Navy to pull ahead.

Look for another high-scoring contest for both teams, but the Midshipmen will take home their first AAC title with a 38-31 victory.

With a win, Navy should jump a few spots in the rankings and earn an even higher-profiled bowl game.

One thought on “AAC Championship Preview: Temple at #19 Navy”