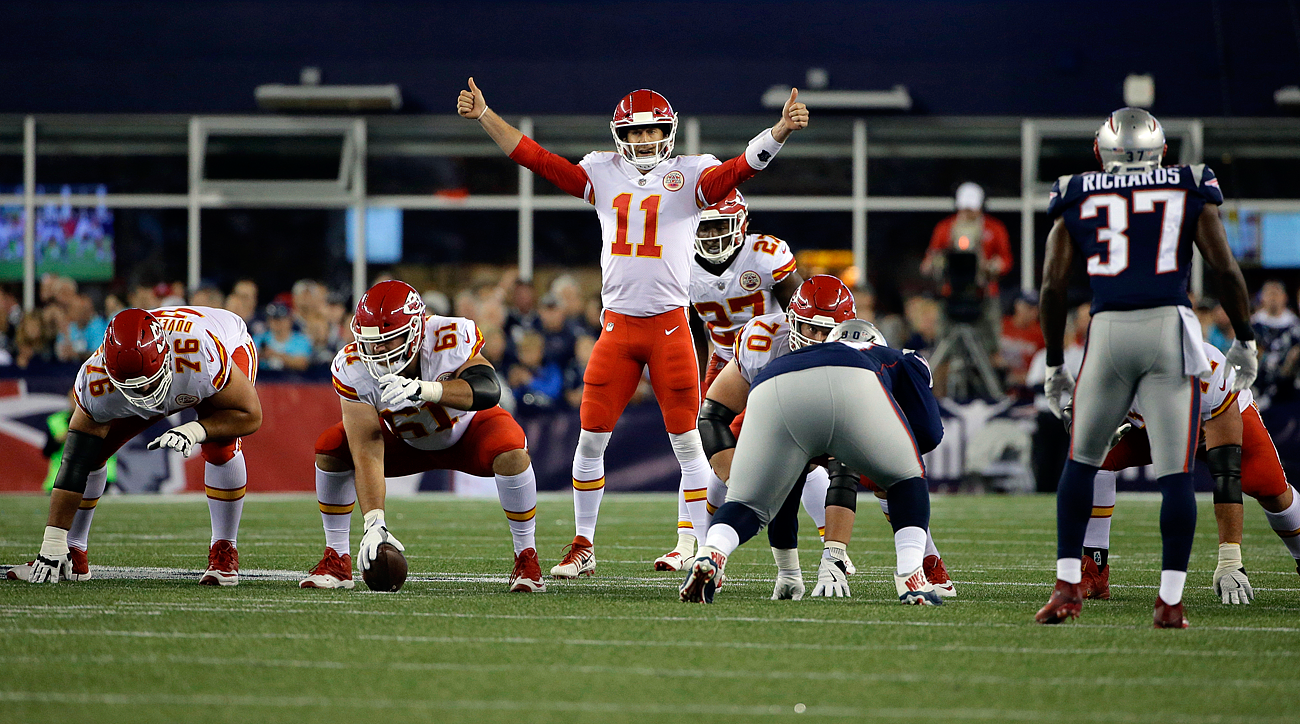 NFL FOOTBALL IS BACK!

And strangely, mediocre. Uninteresting. Boring, if you will. Unless you’re a diehard fan of a team, there really wasn’t one game that required watching (so, if you were watching something else, like live football card breaks in the hope to find something to help you complete your collection, and missed the game, you shouldn’t feel like you missed out on anything spectacular). Perhaps, for pure spectacle, that game was the New England Patriots at home versus the Kansas City Chiefs. Any football fan, knowing New England and how they play at home, knowing just how average Alex Smith can be, especially as a game manager, would’ve probably picked a big win for the defending champions.

The Chiefs totally dominated the Patriots in a way that we rarely see happen. It begs the question: should we be worried about the Patriots? Their defense wasn’t great last year and they won the Super Bowl in spite of it. They’re without Julian Edelman, they’ve lost contributors on defense in Chris Long, Logan Ryan and Rob Ninkovich. Even worse: Tom Brady didn’t look like the Tom Brady of old and yes, it’s still early, but how long of a leash does Brady have before Bill Belichick turns the reigns over to Jimmy Garoppolo? Any other player on the Patriots roster would be subject to the same questioning.

Other than this game? Whole bunch of average play. The Eagles/Redskins game had good moments but has its share of sloppy play. The Sunday night game between the Cowboys and Giants was wholly boring, as were both Monday night games. The NFL didn’t have its strongest week to begin the season, but hopefully the games will get better as the year progresses.

Interesting Stat of the Week: 10

The Jacksonville Jaguars recorded 10 sacks on Sunday against the Houston Texans. Last year, they had 33 sacks all season: the Jaguars got nearly a third of last year’s sacks in a single game. With as much talent on that defense, thanks to big cap space (how they landed cornerback A.J. Bouye, defensive tackles Calais Campbell and Malik Jackson) as well as multiple high draft picks (defensive ends Dante Fowler Jr. and Dawuane Smoot, linebackers Myles Jack and Telvin Smith, and cornerback Jalen Ramsey), I’m not sure that anyone would want to play this front 7. The defense will help carry this team and ultimately cover for very poor quarterback play – more on this later. Oh, and Jacksonville at 1-0 are over .500 for the first time since 2011. No further comment needed.

Play of the Week

I mean…that’s just an incredible play for Wentz and the Philadelphia Eagles. Not only does he miraculously escape pressure, not only does Nelson Agholor make a good catch (one he probably wouldn’t have made last year) and break a tackle for touchdown, but Wentz flings the ball downfield on a dime off his back foot. The Eagles beat Washington because of the strength of their defense, giving up a total of 264 yards and 10 points, but the team will go as far as Wentz is able to progress in his second year and take them.

The Packers didn’t exactly look inspiring against the Seattle Seahawks, but credit will be given to the Seahawks defense for…well, being the Seahawks defense and making life hard for the best quarterback in the game. The Falcons didn’t exactly look impressive against the Bears…who are the Bears. Now, their defense has gotten better and they have more talent in their front seven than most realize, but that should’ve been an easier win than it was.

*On the other hand, did you see this baptism from tight end Austin Hooper?? Lord have mercy*

AUSTIN HOOPER WITH THE DISRESPECT ????pic.twitter.com/8f3DvJIM9i

Both teams will be looking to make a statement in a NFC Championship rematch and the Packers will have their hands full against a solid Falcons front four. On the other side, the Packers probably won’t be able to make mincemeat of the Falcons’ offensive line as they did with the Seahawks and will look to contain Julio Jones and the Falcons rushing attack.

Around the rest of the league, not a ton of other interesting matchups on paper. Philadelphia at Kansas City should be entertaining as Andy Reid faces off versus his old team and former protégé Doug Pederson. New England and New Orleans play in the Super Dome as both teams would like to get a win to avoid going 0-2. The Cowboys and Denver play in the Mile High City in the afternoon slate; Dak will need to get a good win opposing a great defense in a hostile city. Otherwise? Meh.

There was plenty of bad quarterback play this week and it makes you wonder how Colin Kaepernick doesn’t have a job. The jargon goes that he wouldn’t fit into a particular offensive system or that he was so bad last year that he didn’t warrant a spot on the roster. I dare anyone to make a legitimate claim that Kaepernick could not do better than any of the following quarterbacks: Josh McCown (Jets), Tom Savage (Texans), Blake Bortles (Jaguars), Scott Tolzien (Colts), Jacoby Brisset (Colts), Brock Osweiler (Broncos), Mike Glennon (Bears) or Brian Hoyer (49ers).

For some teams, it makes sense. The Jets want to be as awful as possible so they can get a good position in the draft; signing Kaepernick would cause them to win games. Glennon is holding a roster spot until rookie Mitch Trubisky is ready to take over. Savage pretty much lost his spot mid-game to rookie Deshaun Watson. But the rest? Inexcusable. Jacoby Brsisset has little resemblance to Scott Tolzien and yet, in less than two weeks with the team he’s thrown into action.

With all the bad quarterback play, the owners and coaches just have to call a spade a spade: they don’t want Kaepernick on their team and will willingly sacrifice wins to do so.