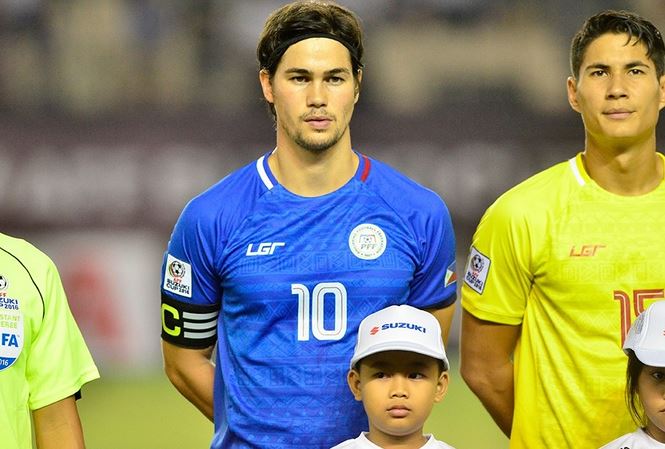 The Filipino star, who was born in Surrey, England to a Filipina mother and an English father, made his international debut with the Azkals in 2006 has since become a Pinoy national sports hero with over one million followers on Twitter and adoring Filipinos worldwide heralding his goal scoring exploits.

The Chelsea academy graduate has been a central and pivotal figure for The Philippines national team’s recent success and qualification for the forthcoming AFC Asian Cup UAE 2019 which kicks off on January 5 in United Arab Emirates.

The 31-year-old Phil Younghusband, however, was also a part of the Filipino national team which secured a third place finish in the AFC Challenge Cup (2012) and Long Teng Cup (2010).

The Azkals national team motto “One blood, one desire” has resonated strongly within the nation as the Philippines national team arguably gears toward its most significant chapter on the international stage in recent memory.

James Younghusband, who was also a product of the acclaimed Chelsea academy, has won 98 international caps for The Philippines and scored 11 goals for the Azkals. The Younghusband brothers domestic side Davao Aguilas finished third this past season in the Philippines Football League with runaway champions Ceres-Negros triumphantly claiming the Filipino league title by a 21 point margin.

The Philippines play in Group C alongside South Korea, China PR and Kyrgyzstan for the forthcoming AFC Asian Cup. Sven-Goran Eriksson’s spirited Azkals first encounter at the 2019 AFC Asian Cup will be against South Korea on January 7 inside the Al-Maktoum Stadium in Dubai.

Four days thereafter, The Philippines will then play China PR inside Mohammed bin Zayed Stadium in Abu Dhabi. Thereafter, the Azkals will then play their third and final 2019 AFC Asian Cup group encounter against Kyrgyzstan on January 16 inside the Maktoum bin Rashid Al Maktoum Stadium in Dubai.

During The Philippines qualification journey for the 2019 AFC Asian Cup, the Azkals finished third in their group with 10 points and scored eight and conceding twelve goals in eight matches.

Subsequently, The Philippines, currently ranked 114th in the FIFA/Coca-Cola world rankings, reached the third round of the 2019 AFC Asian Cup qualifiers where the Azkals triumphantly finished top of Group F with 12 points.

Moreover, The Philippines improved gradually throughout qualification to reach the tournament, scoring thirteen and conceding eight during their successful third round qualification stage which invariably secured the Filipino’s their first-ever AFC Asian Cup appearance in history.