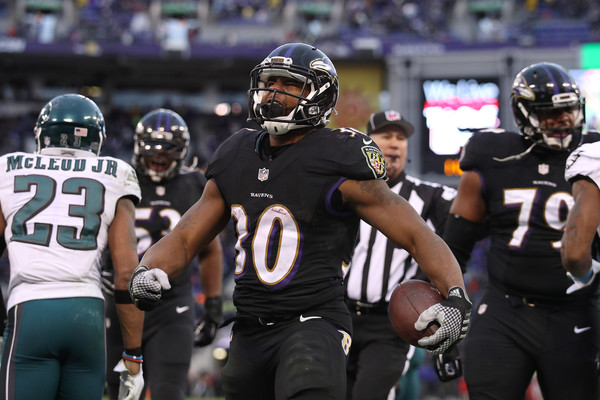 The Baltimore Ravens are at their most dangerous when they possess a strong defense and an even stronger running game.

Since the franchise’s miraculous Super Bowl victory, the defense has been there for the most part (usually staying for the first 58 minutes of the game before peacing out.) On average, the Ravens have finished with the 9th best defense in the league over the past five years. This has happened despite the revolving door at defensive back, as well as the loss of key leadership since the team’s dismantling following the 2012 season.

Baltimore was synonymous with the name “Ray” because of the Hall of Fame play of linebacker Ray Lewis for 17 years. However, despite Lewis’s retirement, the name “Ray” was still supposed to be a key part of the team’s game plan every Sunday going forward. Lewis was supposed to pass the leadership torch to former running back Ray Rice.

Much like the defense ran through Lewis, the offense ran through the legs of Rice. At his best, Rice was easily a top-five at his position, and easily the most recognizable face on the Ravens outside of Lewis. He was charming, he was playful and he was charitable. Rice was supposed to be the leader of the Baltimore Ravens in the post-Ray Lewis era, but he royally fumbled the opportunity.

Lewis gave Rice the keys to the car and former Pro Bowl running back did not waste a single second, did not waste one season to wreck the Baltimore Ravens beyond repair. Rice came into the following season overweight and out of shape, which led to the worst season of his career. He looked prime and ready to make a strong comeback for the 2014 season, but the infamous Atlantic City elevator incident happened. Rice was never able to recover the career-costing fumble.

“I’ve always tried to take this young man and give him something different and teach him something different, educating him while he was going along his process … When you watch this video you see that something was lost by him, by this young man. Something leadership was lost. He got out there and started doing his own thing and what it is in the dark is going to come to light.” – Ray Lewis on ESPN’s Monday Night Countdown

The Ravens have swiped around trying to find the right match at running back post-Ray Rice and have found some flings here and there, but nothing concrete. Justin Forsett had a career-best season under the guidance of Gary Kubiak (1,266 rushing yards and 8 touchdowns), but eventually got pushed out of the door in favor of Terrance West and Kenneth Dixon. West, much like Forsett, also had a career year in Baltimore (774 rushing yards and 5 touchdowns) only to get replaced by the next unknown commodity in Alex Collins, who also had a highlight season (973 rushing yards and 6 touchdowns).

Collins figures to start the season as the lead back in Baltimore, but history indicates his leash will be as short as daylight in the winter. The league has moved on to a running back-by-committee approach, but the Ravens prefer to do things the old-fashioned way with a designated bell-cow at the position. The franchise has been trying to find Rice, and while there has been flashes of the former Pro Bowl running back in his replacements, the total package has not been there.

Forsett has similar build and great vision but is nowhere near the receiver out of the backfield that Rice was.

West possesses hints of Rice’s physicality and (despite his thick frame) is nimble enough to make people miss but his explosion is not even in the same ball park as the former Rutgers Scarlet Knight.

Collins has the explosion, has the vision, has the pass catching ability, has the physicality but durability may be a concern going forward. In Collins’ final three games, he averaged just 2.7 yards per carry and some fumbling early-season fumbling issues began to resurface.

The Ravens may bring a couple of bodies in free agency or the draft to add more competition to the running back room, but they have already an idea of who they would like to be their bell cow: Dixon.

While it’s true the former Louisiana Tech running back has been sighted as often as Big Foot around the halls of Owings Mills, he puts on a show whenever the lights are on bright. Players and coaches rave about him. He is a diminutive, total-package running back in the mold of Ray Rice.

During his rookie year, he ranked first in missed tackles forced per attempt. He also hauled in 30 catches in 12 games. He runs with a balanced mix of elusiveness, aggression and power, just like Ray Rice did in his heyday. And 2018 just might be his last year to prove he can do that for the Ravens for the next 3 to 4 years. Dixon’s career has gotten off to a slow start, in part, because Dixon has gotten in his own way. Injuries and petty suspensions have made him nothing more than just a tease at this point. But eventually, Dixon is going to have to start delivering something consistently or the Ravens will move on from the attractive, yet shady prospect out of Louisiana.

Moving into this year, the Ravens have a room of running backs filled with unspectacular role players headlined by two intriguing options. Collins and Dixon are the two best running backs the Ravens have brought in during the post-Ray Rice era. They both offer game-breaking elements that the playmaker-starved franchise is in dire need of.

However, history tells fans that the Ravens running back room only has one seat for a clear-cut top dog that is going to carry the rock 20 to 30 times a game, just like Rice used to. And as long as his health permits, Dixon should run away with that role sooner rather than later.