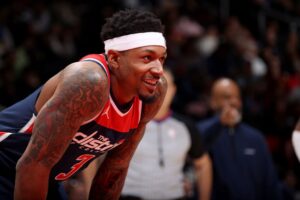 WASHINGTON, DC –  JANUARY 21: Bradley Beal #3 of the Washington Wizards looks on during the game against the Orlando Magic on January 21, 2023 at Capital One Arena in Washington, DC. NOTE TO USER: User expressly acknowledges and agrees that, by downloading and or using this Photograph, user is consenting to the terms and conditions of the Getty Images License Agreement. Mandatory Copyright Notice: Copyright 2023 NBAE (Photo by Stephen Gosling/NBAE via Getty Images)

Washington, DC— It was a Saturday night full of returns but no return was as important as the Capital One Arena return of Washington Wizards’ star guard Bradley Beal.  The three-time NBA All-Star led the Wizards to a 138-118 victory over the Orlando Magic.

The roaring crowd was happy to see their star return. This has been the first time that the Wizards faithful got to see Beal do his thing since December 27, 2022 in a victory over the Philadelphia 76ers.  Beal had missed five games with a left hamstring strain injury, prior to the Wizards’ road victory over the New York Knicks, Wednesday.

The Wizards controlled the game against the Magic.  The Wizards had the lead or tie all game.  Beal was on cruise control letting the game come to him.  After the game, Wizards Coach Wes Unseld Jr. spoke about Beal having eight assists against the Magic and Beal’s growth as a decision-maker with the basketball.

“We’ve seen it time and time again. He had some big assists nights early in the year.  And that’s just a sign of maturity.  He’s not going to hunt shots.  It is what it is.  Obviously late in the game, we know the ball will be in his hands.  We trust that he is going to make the right play.  So to his credit, he continues to do that.”

Beal was smooth all Saturday night.  He scored 17 points—  went 4/4 from the free throw line, and 2/3 from the three point line.  Beal’s teammate made it easy for him to ease himself into the game.  The Wizards had seven different players score double digit points, which is a product of ball movement.

“We have to continue to have that mentality.  And understand that we can be very tough to guard when the ball is popping around like that,” said Beal.  “Even further, it shows that we’re able to do it.  We’re able to break down the defense, get each other involved and get good quality shots every time down the floor if we want to.”

At the end of the first quarter, the team was up 37-26.   Beal had four points but also had four assists in the quarter. Beal showed an old school Michael Jordan demeanor in that first quarter, letting his teammates catch a rhythm before going into his offensive bang.  The third quarter was when Beal decided to open up that bang.  Beal had eight points in the quarter which helped the Wizards put the Magic away.

As mentioned earlier, the Wizards had seven different double digit scorers. One of the seven scorers was Wizards forward Rui Hachimura. Hachimura put in work against the Magic.  He scored 30 points from all areas on the court— mid-range, three point line, and in the paint.  Coach Unseld Jr. spoke about Hachimura’s growth as a three level scorer during the post-game presser.

“We saw that growth a lot last year. He started making the three with a degree of efficiency.  And I think because of that, the gravity of that, is now allowing him to play more off the bounce.  Teams are recognizing him as a three point shooter.  At times, they’re going to run him off [the three point line].  He has taken more ownership of rebounding and pushing”, said Coach Unseld Jr. “He has done a good job of taking care of it—that balance of attacking to score, attacking hitting the paint, driving and kicking.  So I think that to your point it’s growth along those lines.  It’s a good sign for him.”

It wasn’t all rosy for another double digit scorer.  Wizards forward Kristaps Porzingis had to leave the game with 5:17 in the third quarter due to an apparent ankle sprain. Coach Unseld Jr. said that he “didn’t think it’s too bad.”  Before the injury, Porzingis had 17 points and was 10/10 from the free throw line. The Wizards will evaluate the injury today.

Beal wasn’t the only person returning to DC to hoop. Magic guard and Prince Georges County native Markelle Fultz returned home and showed out.  Fultz led the Magic with 23 points including a 17 point third quarter.  In his career, Fultz currently averages 17.2 points against the Wizards.  It’s safe to say that he loves playing against the home team.

The Wizards have won back-to-back games.  It’s important for them to continue to play consistent team ball which starts with Beal setting the tone.