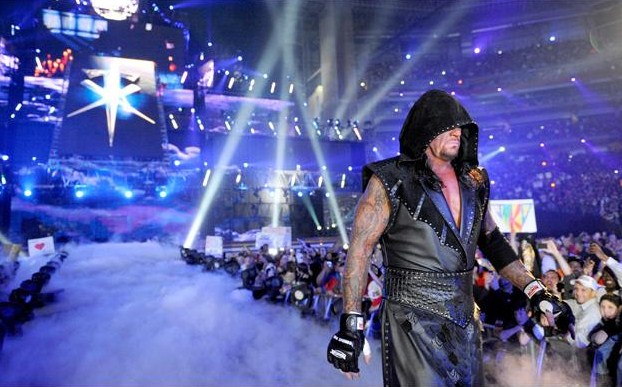 The Undertaker’s legendary career is close to ending. Between health woes and part-time appearances, the writing is on the wall for the Deadman. One aspect of his career that will be most remembered is his WrestleMania record. He is currently 23-1 at the Grandest Stage of Them All. He went 21-0 until Brock Lesnar broke his streak. Despite the loss, his winning streak is one of the most legendary in the sport. What makes this streak so attractive to the fans is the hypothetical arguments that are made about the streak. More specifically, the opponents that could’ve beaten his streak. Here are the best wrestlers that could’ve beaten the Undertaker at WrestleMania.

Who He Never Faced

In 1994, Yokozuna was the man. He defeated the Undertaker at the Royal Rumble. He went over due to the fact of Taker needing time to have his back heal. If we could go back, I’ll have the Undertaker cause Yokozuna the title leading to WM 10, setting the stage for a gigantic battle at WM 10. Since 1994 had two rumble winners, I’d have Lex Luger fight Yokozuna before WM, thus having Taker come into the fray. Yokozuna was built well during this time. Due to this, beating the Undertaker would make sense.

Stone Cold Steve Austin was projected to face Hulk Hogan at WM 18. Due to this, a Taker vs Rock match could have occurred. Maybe even in 98 or 99. The Rock was over and a win wouldn’t be an issue.

Kurt Angle is a pure athlete. In his prime, he could really run circles around the Undertaker. This match could’ve happened in ‘05, better in ‘06. Angle never had a good main event win at WM, and it’s sad to remember. Maybe a win over Taker could have gone a long way.

The Ministry of Darkness was powerful in 1999. The Undertaker was looking very dangerous while having a more dangerous following. Stone Cold was still battling Vince McMahon. Although the higher power segment did not occur until June, Stone Cold could’ve feuded with Taker for half of 1999. Taker could walk into WM 15 and drop the title to Austin, adding fuel to their rivalry. Stone Cold was obviously the most over wrestler at this point in time, he could have given Taker his first WM loss.

Bret Hart was the torchbearer during the “New Generation” era. His technical skills could challenge the Undertaker on any stage. Due to this, Hart could have beaten Taker in 1995 or 1997. Seeing the deadman tap out in the Sharpshooter would be some history making stuff.

John Cena has gone over on every superstar on the big stages except one man, The Undertaker. Cena has beaten Michaels, Triple H, Big Show, JBL, and The Rock. Many fans want Cena to be Takers last match. It’s the equivalent of Hogan vs Flair, which never happened. It needs to happen. The last dominating predecessor in the locker room passing the torch for good.

WM 31 was a wasted opportunity. Sting was healthy. Taker was healthy. The event really needed a headliner for a match. Why not have Sting face Taker. The two most famous mythical and dark personas facing off.

Who He Beat but Could’ve Lost To

Let’s be honest, no superstar has truly scared the Undertaker in a storyline except Kane. The man didn’t want to fight him at first. He was shocked to even see his brother walking in real life. Kane was built like a monster and he really could’ve won.

Randy Orton failed face turn in 2004 is hard to watch. Despite that, Orton was being built as a legend killer. 12 years later, Orton is a top guy. Giving him this win would push him on the same path, but quicker.

Michaels pushed Taker to the limit in 2009. Ending the streak right there would’ve been amazing.  No one expected the match to be that well, the finish would be even more surprising.

Hell in a Cell with his best friend as guest ref, on paper, Triple H had it made to beat Taker in 2012. But he didn’t do it. Since this was billed as an “End of an Era”, Taker could’ve hung up his boots on this night, but he didn’t.

CM Punk’s build up to his Undertaker match was provoking. Playing with the urn, even fake ashes. CM Punk pretty much offended everyone. Since he was cheated out of the Main Event spot, this win could have been a token prize.

Bray Wyatt is now the new face of fear in the WWE. But he lost to the man who really made that character happen. This match was fine, but the finish should’ve been different if we can go back.