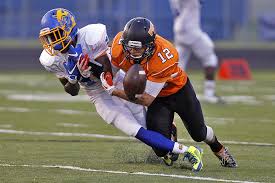 Three minutes into the second quarter, Hopewell fans may have been scratching their heads as their team was deadlocked with Tabb 0-0 last Thursday in Yorktown.  But they sprung lose for 19 points by halftime on their way to a rather dominating 40-7 win. It was rather dominating as statistics bear out some weak spots in the Blue Devil attack. Here’s  Head Coach Ricky Irby,

“I didn’t think we played exceptionally well.   (There were) too many turnovers and penalties.”

The Blue Devils lost two fumbles and had a pass intercepted while committing nine penalties for 60 yards. “I’d say (it was) first game mistakes, plus Tabb played us very tough,” Irby said, of the reason behind the errors.

Robert Briggs finally got Hopewell untracked in that second quarter following great blocking up front en route to a 13-yard touchdown scamper off left tackle.  It looked like things would stay that way till halftime, but with just under two minutes to go and the ball on their own 5-yard line, Tre Henderson burst through the line and accelerated past defenders with his great speed all the way for a 95-yard touchdown.

Their 12-0 lead was then enhanced a minute later when safety Jarin Goode alertly picked off a Tabb pass and returned it 30 yards for a touchdown.  The first of 4 consecutive extra points by Kicker Boonsong Paxton gave the BlueDevils their 19-0  halftime lead.

But during the intermission, Coach Irby and staff motivated the team even more, since they had only been two big plays away from leading 6-0 at the half. This against a team that had graduated far more seniors than Hopewell had,  while on their way to only a 5-5 record last year in Division 3A. And Hopewell had gone 9-2, and all the way to the state semi-finals.  So a different team seemed to come out in the second half.

They took the opening kickoff moving the ball well and finishing their drive with a 43-yard touchdown run by Briggs. Then after stopping the Tabb offense, Hopewell clicked again offensively.  Starting quarterback Joseph ‘Eliades connected with Henderson for an 18-yard touchdown pass and just like that the Blue Devils were in control 33-0.

From that safer vantage point, Coach Irby began to sprinkle in reserves to see how his still new 2019 team looked depth-wise  – their last scrimmage the week before had been rained out, so for the rest of the game, many second unit guys saw action.

Defensively, Keyon Williams starred for Hopewell with 9.5 tackles including 7 tackles for losses and was named the Strosnider Chevrolet Defensive Player of the Game.  Henderson chipped in with

While both teams ran about the same number of plays, Hopewell, even with their reserves, tallied 467 total yards of offense to just 148 for Tabb.  Henderson rushed 6 times for 115 yards and a touchdown while playing stellar defense from his cornerback position. Briggs finished with 114 yards and two touchdowns on 10 carries.  Fullback Kavion Cox also contributed 6 rushes for 42 yards along with some fine blocking, while starting defensively as well.

The offensive line claimed the Stroesnider Chevy Offensive Award of the game.

Hopewell took their bye week this week, and won’t return to action until next Friday night.  I.C. Norcom comes to our house for a classic rematch from last year.  After a very close 13-0 win that Hopewell achieved in Portsmouth to start the season, Noncom upset the Blue Devils in Hopewell in that state semi-final round 14-12.

As motivation abounds for Hopewell with so many returning letterman who remembers that loss, let’s add to that motivation by packing the house in this our first home game of the season. While some coaches may be scouting Norcom at their next game at Home Saturday against Petersburg, it shows once again the many facets of team sports – the mentoring expertise that coaches provide, and the encouragement and enthusiasm that fans bring.

Combined with the player’s God-given talent and a desire to work to the maximum, players combine their individual effort with team goals that become more important than individual stats.  They root for and encourage those that may have had a bad day of practice Or, they help inspire a teammate who was “off their game “ in a game.

“Iron sharpens iron” ( Proverbs 27:17) is a favorite proverb of mine that speaks to what happens on the football field, and in the game of life.  May each of us be inspired to encourage others while receiving encouragement as well.

Jeff Butler is the Pastor of Woodlawn Presbyterian Church in Hopewell and calls the play by play for each Hopewell Football game over WHAP Radio AM 1340 and 96.9 FM.  You can also listen to each game on your computer at www.foxsports1340am.com and click “Listen Live” , or on your phone by clicking the Menu bar, or by dialing 1-605-313-0571.