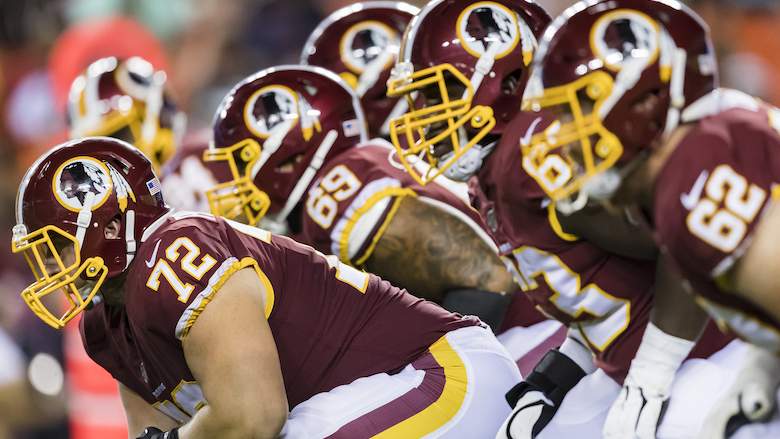 The Washington Redskins have their 53-man roster all set.   The team rewarded talent, who proved themselves in camp and preseason, over underachieving talent.

Wide receiver Robert Davis Jr. made the roster, but it wasn’t easy. Last year, Davis suffered a broken tibia and multiple ligament damage to his right knee.  Davis had to endure months of rehab and was low on the team’s depth chart at the start of camp. During camp, Davis’ said “[he] wasn’t sure that [he’d] play again.”  With all that going against him, he was able to perform at a high level in the preseason. Davis had 115 receiving yards and two touchdowns, including a 55-yard and a 46-yard touchdown reception.  He also was valuable on special teams. As a gunner on punts, Davis recovered two fumbles against the Atlanta Falcons. Davis’ determination and grit got him a spot on the roster. All-time great boxer, Floyd Mayweather Jr. has a motto “hard work, determination”, which symbolizing this grind for greatness.  Davis’ rise embodies this motto. His story is not complete but hopefully, it’s just beginning.

Undrafted rookie out of Kansas, wide receiver Steven Sims Jr. was another receiver that was on the bubble. He was a guy that many observers liked in camp.  Sims Jr. has 4.3 speed and that can’t be taught. In the preseason, the undrafted rookie didn’t turn heads as a receiver but in the final game he showed out as a kickoff returner.  The Redskins have been looking for an electric return man since Brandon Banks. Banks played for the team from 2010-2012 (I could mention Brian Mitchell but that’s too easy).  He averaged 9.4 yards per punt return during his time in D.C.  In his final preseason game against the Baltimore Ravens, Sims had kickoff returns for 41 and 39 yards.  After the game Redskins head coach Jay Gruden described Sims Jr. as “exciting.” That excitement landed Sims Jr. a spot on this roster— possibly as the Redskins return man.   This camp was more about earning a spot and less about politics.

Former 1st rounder of the 2016 draft, Josh Doctson never lived up to his potential.  The team saw flashes but Docton never became “the guy”. This led to the team cutting the former 1st rounder.  Doctson teased the team and fan base.  For example, in the 2017 season, he made an amazing 52-yard TD catch by leaping over former Redskins and then Oakland Raider cornerback David Amerson.  Also, in the same season, he made a diving catch against the Seattle Seahawks to lead the Redskins to an improbable victory. All that is fine, but the team needs consistency at the receiver position.  In his three seasons with the Redskins, Doctson had two 500-yard seasons, which is not acceptable for a 1st round pick.  Doctson wasn’t the only surprising cut.

In the 2017 draft, the Redskins drafted Samaje Perine in the 4th round with the thought that he could be their every-down back.  Perine never really worked out. The once University of Oklahoma standout out never showed the talent that made him OU’s career rushing leader (ahead of Adrian Peterson).  Perine’s rookie season was his best season with the Redskins. He rushed for 603 yards on 175 carries but only averaged 3.4 yards a carry. Perine’s lack of explosion in the running game and his inability to secure the football led to his demise as a Redskin.  Perine was claimed off waivers and is now a Cincinnati Bengal.

Here is the Redskins 53-man roster:

*Cam Sims had a great opportunity to make this team.  However, his play against the Ravens led him off the main roster—Sims had three dropped passes.  The team still believes in him, but he must regain their trust.

For the most part, the team has rewarded hard work over status.  Hopefully, in 2019, this team is rewarded by their decision to do so.