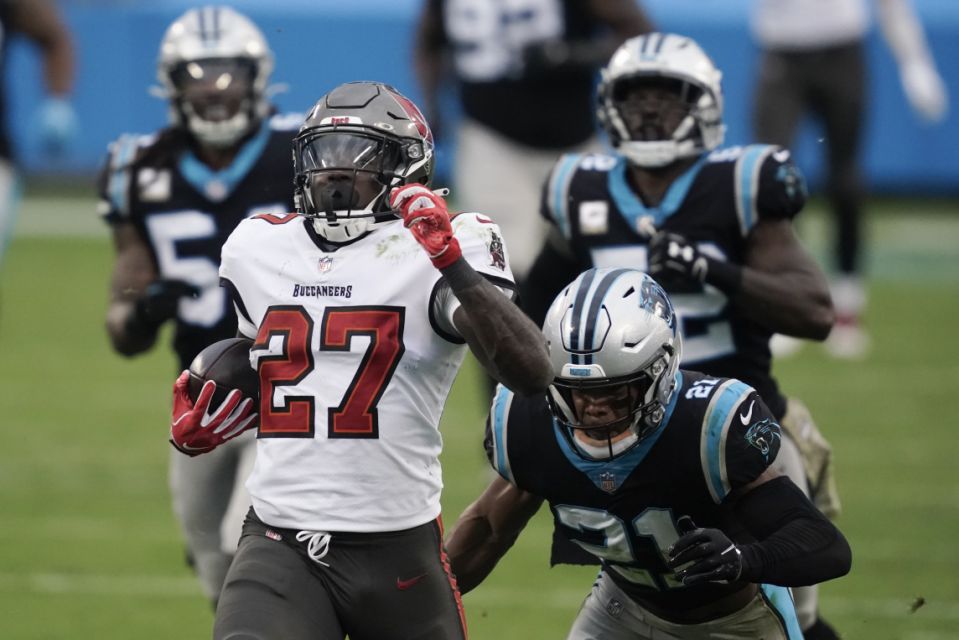 After an embarrassing prime time loss to the New Orleans Saints last week, everyone expected Tom Brady and the Tampa Bay Buccaneers to come to Bank of America Stadium with a head full of steam.  However, the Panthers set the tone early after linebacker Shaq Thompson forced Tampa running back Ronald Jones II to fumble on the Bucs first drive and Panthers safety Tre Boston recovered the loose ball.  Carolina took advantage of the turnover with quarterback Teddy Bridgewater connecting with tight end Colin Thompson for a 7-yard touchdown to give the Panthers an early 7-0 lead.

The Bucs responded by scoring a touchdown on their next possession as Brady found tight end Cameron Brate for a 5-yard touchdown to tie the game at 7.  Much was said about DJ Moore’s lack of targets the last couple of games and offensive coordinator Joe Brady said that the team would focus on getting Moore involved.  After a big 38 yard reception, Moore hauled in a 24 yard touchdown on the very next play to give Carolina a 14-7 lead.  After trading field goals, Brady found Mike Evans in the back of the end zone to tie the game.  The Panthers looked to have the momentum – and a chance to go into halftime with a lead – before a 42 yard strike from Bridgewater to Moore was overturned after booth review.

The Panthers third quarter offensive struggles continued as the Bucs scored 12 unanswered points and began to pull away.  After a spectacular special teams effort pinned the Bucs to their own 2 yard line, Jones broke through the middle for a 98 yard touchdown run – the longest allowed in Panthers history.  On the very next Panthers possession, Bridgewater was intercepted by Jason Pierre-Paul and the Bucs capitalized with a field goal to increase their lead to 29-17.  Facing 4th-and-5 from their own 40-yard line, the Panthers tried a fake punt but it was quickly sniffed out by the Bucs defense.

Carolina could only must 6 second half points en route to a 23-point loss.  Bridgewater was injured in the fourth quarter with 5:46 left to play.  PJ Walker entered the game at quarterback as the Panthers attempted to convert a fourth down deep in their own territory.  Carolina turned the ball over on downs and the Bucs finished out the scoring for the day on a 7-yard Rob Gronkowski touchdown to make it 46-23.  Third downs have continued to be a struggle both offensively and defensively for the Panthers.  On offense, Carolina only converted 1-9 while the defense allowed the Bucs to convert 10-16 third downs.  The loss is the Panthers fifth straight and drops them to 3-7, 1-4 in the NFC South.