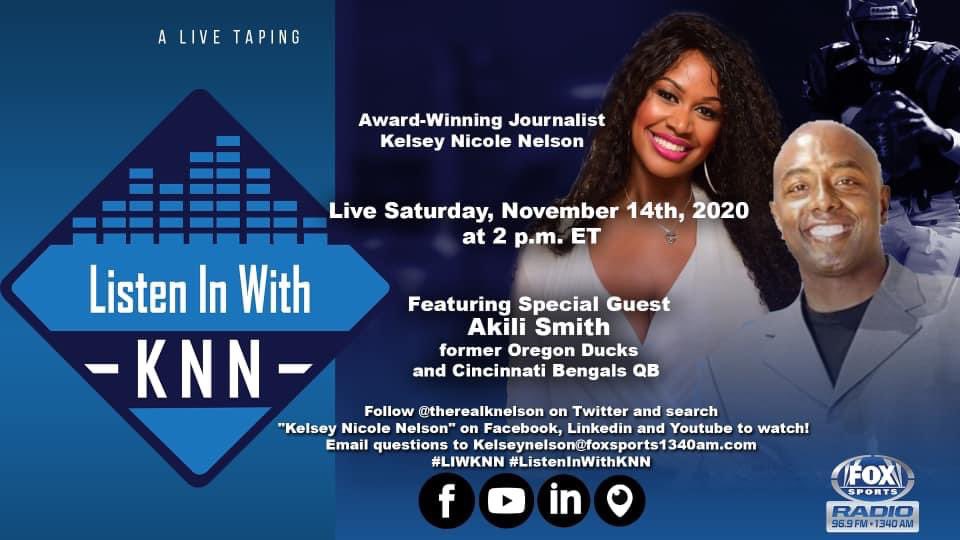 On the latest episode of Listen In With KNN on Fox Sports 1340AM, host Kelsey Nicole Nelson welcomed former Oregon Ducks and Cincinnati Bengals quarterback Akili Smith to the show.

His journey was an unconventional one as his route to the NFL was a hard one. Smith started off as a minor league baseball player and then went to Grossmont College. After spending two years at Grossmont, he transferred to the University of Oregon where he started 11 games and threw 32 touchdown passes during his senior career.

“For some people, junior college is the final stop and guys like myself, Cam Newton and Tony Banks were able to weather the storm and make it to the NFL. What I would say to the guys is to keep fighting. Just make sure everyday you’re waking up and being a leader by taking care of business,” Smith said. “When it’s time to go out there and prepare, you can see the game clearly and execute out there on the football field.”

In 1999, he was selected third overall in the first round by the Cincinnati Bengals in a draft class that featured quarterbacks Tim Couch and Donovan McNabb. During that time, he experienced a lot of quarterbacks, owners, head coaches and general managers that weren’t African American.

“It was a blessing as we were dealing with some organizations and coaches that don’t even want us at those positions. We have a lot of starters in the league but there’s still some other stuff going on that we gotta get fixed. A lot of times, either you’re a starter or out of the league. When that starts to happen, we can really start to see change in the NFL,” he said.

After a short stint in the league, Smith played in the Canadian Football League for a season with the Calgary Stampeders. It was something that he wished he’d done earlier but his pride kept him at home waiting for another NFL opportunity. One of the most important things that Smith learned in the CFL was being a team player.

“You just don’t want that energy when you’re waking up everyday and you’re looking at the person you’re competing with saying, ‘he sucks.’ That same energy that you’re giving out, somebody will think the same way about you,” he said. “My advice to any free agent right now that’s trying to get back into the league is go to the CFL. You have to make sure you’re playing in pads to make sure you keep your body in shape.”

When Smith’s playing career ended, it was a rough adjustment at first as he had the itch to play even though his body said it was over. He got into coaching with stops at Grossmont Colllege, University of California, St. Augustine High School, The Bishop’s School and Marantha High School. This new profession gave him a new perspective.