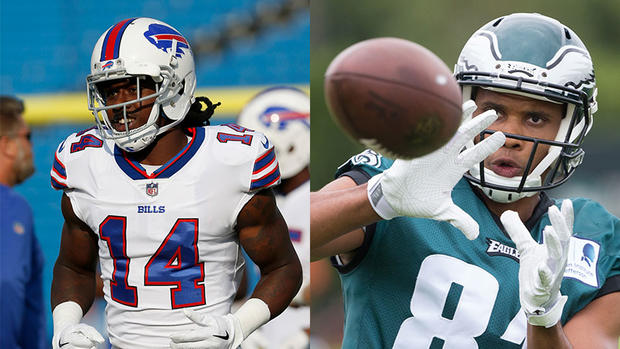 It’s about as rare as a solar eclipse to see NFL trades. Especially early in the preseason. If they do happen, it is rare that they involve a number of key starters. Low and behold, the NFL had such trades to grace our presence on Friday.

In a pair of trades involving three teams (Buffalo Bills, Los Angeles Rams, and Philadelphia Eagles), a few key names including WRs Jordan Matthews and Sammy Watkins were moved to new destinations. Let’s break down the two trades and how their impact.

Once upon a time, Watkins was the fourth overall selection out of Clemson in the 2014 NFL Draft and it appeared the Bills found there leading receiver for the next decade. Three seasons, 37 games, 153 catches later, Watkins is Los Angeles-bound to join RB Todd Gurley, QB Jared Goff, and company. Watkins could not avoid the injury bug in Buffalo which played a great hand in his departure. Watkins is barely 24 years of age and as I mentioned, has less than 40 games worth of experience. If he can avoid injuries, it’s possible he can give the Rams a much needed dynamic: deep speed. Adding a second round selection gives the Bills four draft picks in the first two rounds in 2018. Extra early rounds picks are never a bad thing.

The Bills gained a corner in Gaines who also has an unfavorable injury history. Foot and lower body injuries has hampered Gaines the past several seasons. This past season, Gaines allowed nine receiving touchdowns, which was the most allowed by a cornerback in the NFL. A major drop-off from his 2014 season in which he gave up only one. Gaines will immediately be slotted opposite rookie corner Tre’Davious White thanks to the other trade that occurred involving the Bills.

The Eagles had significant cornerback issues with Jalen Mills and Patrick Robinson listed as the starters at the position. With second-round pick Sidney Jones on the shelf until midseason at the earliest and third-round pick Rasul Douglas in the developmental stage, a trade for a veteran corner was a move needed to be made. In Darby, the Eagles obtain a young corner that can very well be the team’s best corner. Darby posted 21 pass deflections and two interceptions during his rookie 2015 season. A solid corner with profound instincts, Darby is known for his 4.38 speed and ability to play press man coverage. Which means he fits what the Eagles are looking for from their corners.

Meanwhile, the Bills grab a veteran receiver in Matthews who has posted catch totals of 67, 85, and 73 in each of the past three seasons. He has also missed just two games in his three seasons as a pro. Matthews displayed the ability to play the slot and the boundary as a wide out and at 6’3, he presents a significant matchup issue for opposing defenses at times. The biggest question from the acquisition of Matthews is that the Bills have a wide receiving group that lacks a defining deep threat. With Matthews, veteran Anquan Boldin and rookie Zay Jones, there are three possession receivers who are polished route runners. However, not necessarily known to stretch defenses over the top. Both teams made out quite well with their acquisitions and it will be interesting to see if the respective trade results equal immediate production.