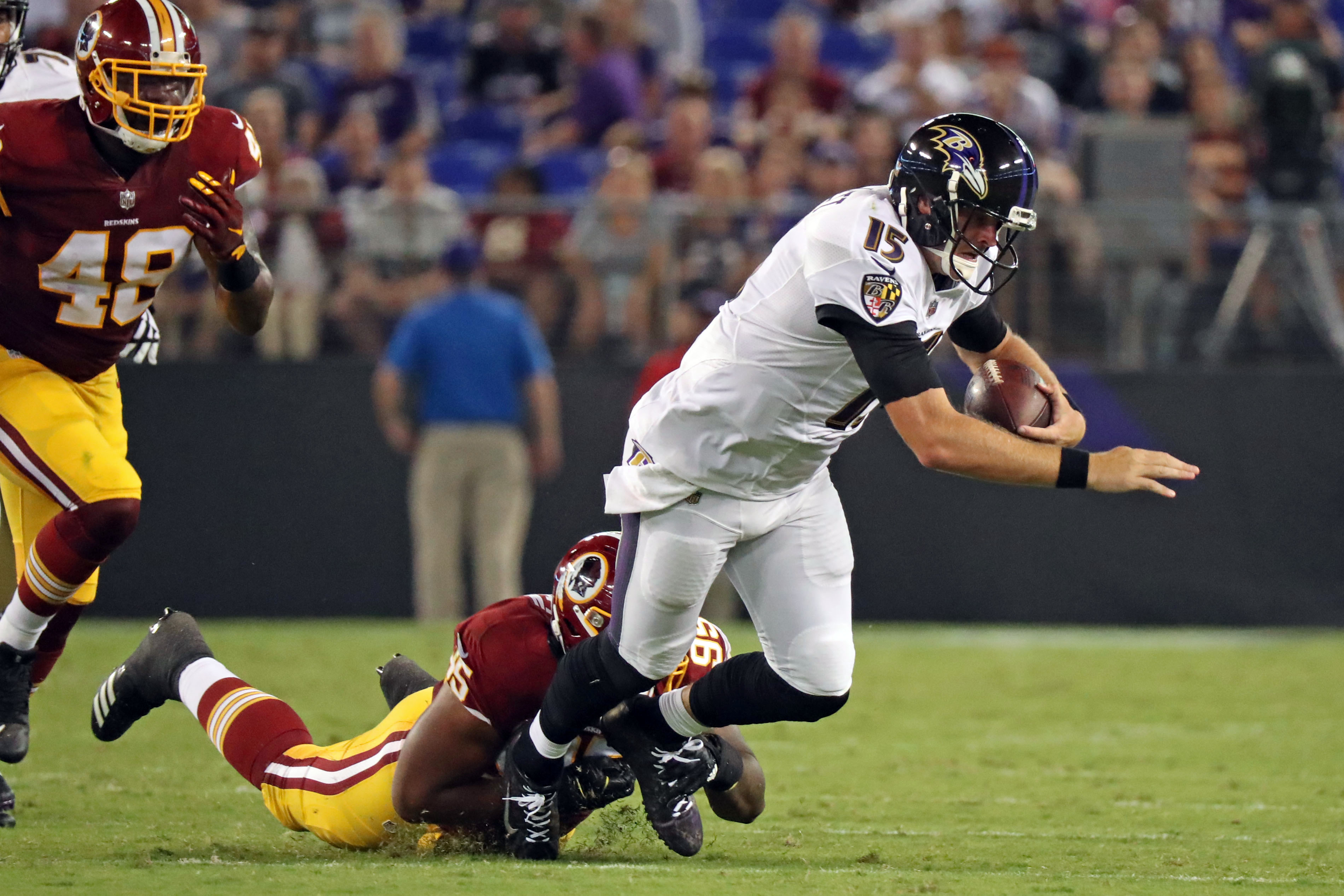 Despite a Baltimore Ravens 23-3 win against the Washington Redskins, Ravens quarterback Ryan Mallett didn’t help his case one bit.

BALTIMORE, Md. — The Baltimore Ravens haven’t necessarily found an answer for their backup quarterback question. Ryan Mallett left much to be desired after a poor performance against the Redskins in the first half. To be fair to Mallett, he didn’t play with many of his starters on offense.

Ravens guard Alex Lewis will miss the rest of the year with a shoulder injury, guard Marshal Yanda and right tackle Austin Howard did not play. Ronnie Stanley and Ryan Jensen did play, however. Mallett also missed his top three receivers in Mike Wallace, Jeremy Maclin and Breshad Perriman.

Mallett went 9-of-18 (50% completion percentage), passing for 58 yards and a 57.2 passer rating. Those kind of numbers are pretty uncharismatic to say the least.

“We started off a little slow, got it going a little bit, got the run game going, got the pass going,” Mallett said after the game. “We need [to be] more consistent. It’s the first preseason game, you’ve got a lot of new guys out there, but it’s to be expected, so now it’s going back to work Saturday and getting ready for Miami next week.”

Baltimore head coach John Harbaugh was a little less harsh of a critic than many expected.

“I thought he played winning football,” Harbaugh said, via the team’s official transcript. He played good football, just what we asked him to do.”

Mallett has had the specter of Colin Kaepernick over his shoulder for the entirety of training camp. The possibility of the Ravens bringing in Kaepernick has been a hot button issue, ever since starting quarterback Joe Flacco went down with a back injury. The situation has been compounded with Baltimore’s owner, Steve Bisciotti’s reluctance to sign Kaepernick, due to the possible backlash it could cause.

Kaepernick has in the news for his protests against police brutality. The free agent quarterback also wore socks depicting police officers as pigs and wore a Fidel Castro shirt (a former Cuban communist dictator). He hasn’t committed a felony, but the way that he has been ridiculed, if one knew no better, they’d assume that he had committed one.

Often what is lost in the discussion is Kaepernick’s play while healthy. He offers the ability to make plays with his feet, he has a strong arm and he’s hyper-talented. He’d for sure be the better option as the Ravens backup than Mallett, but if only it were just about football.

Despite Baltimore’s more pressing issues than a backup at the quarterback position, many have still clamored for Baltimore to sign Kaepernick. What should Baltimore really do? Only time will tell.