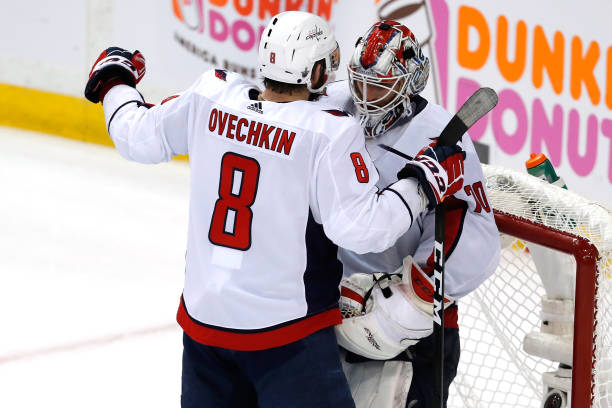 Playing in the conference finals for the first time in 20 years, the Capitals wasted no time in seizing the opportunity.

Michal Kempny scored 7:28 into the first period to open up the scoring in this series. The goal was Kempny first career playoff goal; and assisted by Capitals hero Evgeny Kuznetsov and John Carlson.

Tampa Bay Lightning star Nikita Kucherov scored with 7 seconds remaining in the first period; but the goal was immediately waved off as TB had too many men on the ice; sending the Caps to their first power play of the series.

Kuznetsov won the ensuing face-off and after a T.J. Oshie assist; Alex Ovechkin scored his first goal of the series with 5.3 seconds remaining in the first period to give Washington a 2-0 lead heading into the first intermission.

The Capitals continued to dominate in the second period with Jay Beagle scoring 2:40 into the period to give the Caps a 3-0 lead.

A Kucherov roughing penalty 6 minutes into the period sent Washington to their second power play of the night and Lars Eller capitalized. Eller’s power play goal was assisted by Oshie and Ovechkin; and made the score 4-0 before the halfway point of game one.

Vasilevskiy ended his night with 21 saves on 25 shots and a .840 save percentage.

The Washington Capitals domination ended in the final period as TB started to show some life.

Ondrej Palat cut the Capitals lead to two with just under 7 minutes remaining intermission; awakening the Amalie Arena crowd and creeping doubt into the minds of Washington fans.

The Capitals defense fought off the mini-Lightning surge and didn’t allow a single shot in the final 3:53; securing the Washington 4-2 win.

In their first series of this postseason without home-ice, the Capitals win game one for their first time to steal the advantage from Tampa Bay in game one.

The Caps saw the return of Tom Wilson and Andre Burakovsky; while Nicklas Backstrom missed his second straight game with a hand injury. Backstrom is listed as day-to-day.