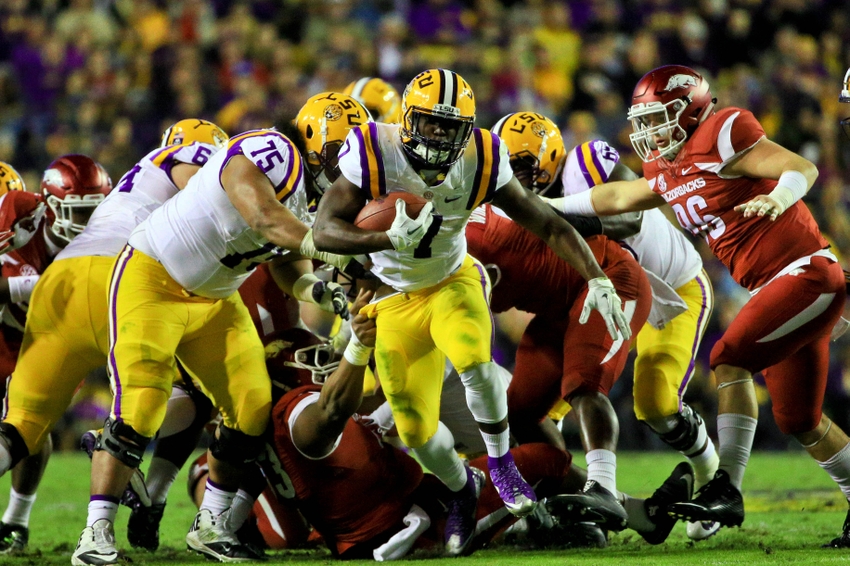 I’m not a great believer in moral victories, especially on the gridiron. However, for the #24 LSU Tigers, in the midst of season-altering circumstances, a 10-0 loss to #1 Alabama last week showed that the team can hang with just about anybody in the nation. The Tigers (5-3, 3-2 SEC) now turn their attention to another SEC West foe. This time, it’s the #25 Arkansas Razorbacks (6-3, 2-3 SEC), who is fresh off their biggest win of the year by defeating Florida last Saturday at home 31-10. Two physical SEC West teams collide on Saturday night so with bowl implications on the line. Here is the preview for LSU vs. Arkansas.

What To Know About LSU:

If you watched carefully during LSU’s matchup with Alabama, it was quite obvious that starting quarterback Danny Etling was a deer in the headlights for four quarters. Etling completed 11 of his 24 passes for just 92 yards and an interception against the Crimson Tide. Easily his worst game of the season, the former Purdue transfer has been overall steady at this point, throwing for 1,224 yards and seven touchdowns in seven games of play. Behind him at running back is who some have anointed as the best running back in the country in Leonard Fournette. The junior running back has dealt with injuries but he has been productive for the most part with 705 yards and five touchdowns. Paired with backup Derrius Guice (629 yards, seven TDs) and LSU has a dangerous one-two punch that blends speed with power and elusiveness from both backs. Interim head coach Ed Orgeron will attempt to get this rushing train going after the offense was held to a lackluster 33 yards on the ground by Alabama last week.

While the offense sputtered, the defense provided an opportunity to defeat Alabama. The unit held the Tide scoreless until the 13-minute mark in the fourth quarter as well as forced two turnovers. Senior linebacker Kendall Beckwith totaled 16 tackles last week and has 85 total on the season. The 13th ranked defense in the nation has held six of their eight opponents to 18 points or less and that stinginess is a result of having All-SEC caliber players such as safety Jamal Adams (56 tackles, 3.5 TFLs, one INT) and defensive end Arden Key (38 tackles, 9.5 TFLs, eight sacks) that are having outstanding seasons. Cornerback Tre’Davious White (26 tackles, two INTs) has also produced his best season as a Tiger and is a huge reason why LSU only allows 196.9 passing yards per game.

What To Know About Arkansas:

Arkansas’s season so far has truly been roller coaster-like. Wins over TCU and Florida has been sprinkled with lopsided losses to Auburn and Texas A&M by a combined score of 101-27. The win over Florida last week was a needed win on their belt especially after getting shellacked two weeks before by Auburn. Running back Rawleigh Williams churned out 148 hard-fought yards and two touchdowns against the talented Gators defense and leads the team in rushing yards with 955 along with seven rushing touchdowns. Junior quarterback Austin Allen has cooled off as of late after a fast start to the season but is still third in the SEC in passing yards with 2,291 yards and tied for first in TD passes with 19. He has a plethora of targets that gives the Razorbacks a little flexibility on offense. Leading receiver Drew Morgan (48 catches, 515 yards, three TDs) is fourth in the conference in catches and hauled in seven catches and a touchdown vs. UF. Fellow receivers Keon Hatcher and Jared Cornelius have combined for 53 catches and nine touchdowns on the season.

The Razorbacks defense showed up in a major way last week by limiting Florida to just 241 total yards but the unit has also allowed over 400 yards on five different occasions this season. The group doesn’t have a ton of interceptions (nine) but they are tied for first in the conference in interceptions returned for touchdowns (four). Linebacker Brooks Ellis is the team leader in tackles with 62 while defensive ends Jeremiah Ledbetter and Deatrich Wise Jr. combine for 10 tackles for loss and 7.5 sacks on the season.

If there was one positive taken away from the 10-0 loss to Alabama, it showed that the team has the talent to hang with the best of the best. Which was already obvious before the game but the way the season has played out for the Tigers (firing of Miles, key injuries, QB inconsistencies) the mental aspect of the game was missing.

The Razorbacks present a unique test. A physical offense that is centered around it’s heavy offensive line being able to make lanes in the run game while also developing considerable enough balance in the pass game. What will be key for LSU is getting solid push from defensive ends Lewis Neal and Davon Godchaux to counter Arkansas’s power run game. The 19th ranked run defense of LSU can neutralize Arkansas’s run game which will make Arkansas test LSU’s secondary, which is arguably their best unit on defense.

LSU’s offense runs through the ability of Fournette to eat up chunk yards in run game to open things up for receivers Travin Dural (25/249/1), Malachi Dupre (26/305/2), and DJ Chark (19/314/3). What should be objective #1 for Arkansas coming into the game (bottling Fournette) is never as easy as it sounds.

The Razorbacks will hit the field with plenty of confidence after handing Florida a 21-point loss last week and will look to build on that win against a rugged LSU team. The Tigers themselves may be feeling a little different, in an optimistic mind frame, even after a bitter rivalry loss. With Fournette being a non-factor last week, he may tell Orgeron before the game that he wants 40 carries. The Razorbacks are ranked 92nd in the country against the run, allowing 198.4 yards per game. This contests smells like Fournette and Guice carrying the LSU offense and an angry LSU team gets a small taste of redemption.