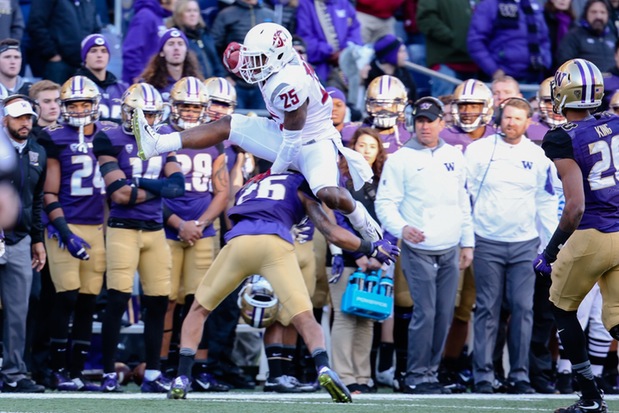 The Apple Cup rivalry has significant history but with the rivalry being tucked away in the Pacific Northwest, it is not much of a surprise that the annual game goes unnoticed.

The latest chapter of the rivalry changes that dynamic for this year at least. The #5 Washington Huskies (10-1, 7-1 Pac-12) are on the doorstep of the College Football Playoff and can definitely be in the mix if they are able to win the Pac-12 Championship. First things first, they have to make the title game of course. In order to do that, they have to defeat their arch rival in the #23 Washington State Cougars (8-3, 7-1 Pac-12). The Cougars themselves are playing for a spot in the conference title game as both teams have identical conference records. Two rivals with the opportunity to knock off the other and take the next step to the Pac-12 title game in Santa Clara, California on December 2nd. Here is the preview for the huge conference rivalry game.

What To Know About Washington:

An ugly loss to USC a couple of weeks ago aside, the Huskies have been quite impressive this season. Bouncing back to beat Arizona State this past week, 44-18, was a positive sign for a team going into a game with possible national championship implications. How far the Huskies go will depend mainly on the how far quarterback Jake Browning can take them. His 37 touchdown passes are 2nd most in all of college football and have six games this season of three or more touchdown passes with zero interceptions. His last road outing, vs. California, saw Browning throw for 378 yards and six scores and that type of play is needed on the road against the high-scoring Cougars. Running back Myles Gaskin (1,130 yards, nine TDs) has rushed for over 100 yards in five of the last seven games. Ironically, his lowest rushing total of the season (51 yards) came in the only loss of the season. Behind him is Lavon Coleman, who has produced 653 yards on the season and averaging 8.3 yards per carry. The offensive headlines for Washington have surrounded star receiver John Ross a ton this season and rightfully so. Ross is tied for third in the country in receiving touchdowns with 15 along with 991 receiving yards.

The Huskies defense has been one of the best in the country and ranked 16th overall. A few outings were quite dominant and one, in particular, was their performance against Stanford by holding them to six points and 213 total yards. Losing leading tackler linebacker Azeem Victor two games ago to a broken leg was significant but there is still enough talent to push forward. Especially in the secondary with the likes of corners Sidney Jones (29 tackles, two INTs) and Kevin King (29 tackles, two INTs) and one of the best free safeties in the country in Budda Baker (52 tackles, 6.5 tackles for loss). Middle linebacker Keishawn Bierra is overshadowed by his secondary mates and is having an outstanding with 54 tackles and five fumble recoveries.

What To Know About Washington State:

Everyone knows that watching a Cougars football contest will be entertaining thanks to the type of football that is played by head coach Mike Leach and his ballplayers. Quarterback Luke Falk is one of the best passers in the country and has the numbers to prove it. Falk is third in the country in passing yards (3,935), touchdowns (36), and passing yards per game (357.7). In Leach’s offensive scheme, running backs are not as much of a premium as QBs or WRs but the Cougars have a luxury this season with three productive backs in Jamal Morrow (543 yards, four TDs), Gerard Wicks (443 yards, 11 TDs), James Williams (531 yards, six TDs). Leading receiver Gabe Marks is sixth in the country with 12 receiving TDs along with 74 catches for 755 yards. The team lost receiver River Cracraft (53/701/5) to a torn ACL but sophomore receiver Tavares Martin Jr. (57/671/7) is more than willing to step to the plate.

The defense for the Cougars has not been the most reliable but when plays were needed, the unit came through at times and are one of the better defenses in the country in regards to turnovers. The unit has generated 21 total turnovers on the season, good for the 12th in the FBS. Free safety Shalom Luani leads the team in interceptions with four and second on the team in tackles for loss with 8.5. Redshirt sophomore defensive end Hercules Mata’afa leads the team with 12 tackles for loss. Prior to the last week’s loss to Colorado, the Cougars were #1 in the Pac-12 in rushing defense and have limited opponents to rushing totals of 78, 61, and 43 yards.

As far as history goes, it is a one-sided affair. The Huskies hold a 70-36-2 record in the series and have won six of the past seven matchups in the series. This season makes the rivalry unique based on the actual rivalry seems to be taking a backseat to what’s to come for the victor.

The offenses for both teams have the weapons to make this a shootout worthy game and more than likely, it will be down to the two stellar quarterbacks that will determine the winner of the contest.

Not having Cracraft on the field will be something that Falk and the Cougars will have to get used to. Based on their consistent production, they should be fine even going against one of the better secondaries in college football. While they have to focus on the Huskies secondary, the Huskies defense has also generated 34 sacks on the season and have seven players with at least three sacks recorded.

Ross and receiver Dante Pettis (46/701/12) are two playmakers for Browning in the passing game and corralling those two along with Gaskin and Coleman will be a tough task that may be a load for four quarters for this undersized Cougars defense.

So who wins and why? With so much at stake for both teams, this is a matchup where Washington State has nothing to lose. Getting to this point in their season has already exceeded expectations. On the other hand, the Huskies have a ton on the line. So many implications and standing in their path is a dangerous Cougars team with a quarterback who has elevated his game in recent weeks. If there was ever a time for the Cougars to embrace the role of spoiler, this home game against their arch rival is tailor-made for Wazzu. A close shootout is squeezed out by the Cougars behind their quarterback and wizard head coach, which would be their first win over Washington since 2012 and a surprise 2016 Pac-12 North title.