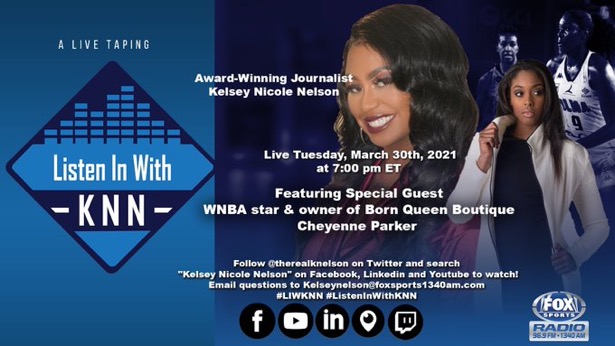 On the latest episode of Listen In With KNN on Fox Sports 1340AM, host Kelsey Nicole Nelson welcomed WNBA star and owner of Born Queen Boutique Cheyenne Parker to the show.

Her basketball journey began in Queens, New York where she fell in love with the sport. Parker She followed her two brothers around while they played the sport so she could learn from them.

“That’s what made me pick up a basketball. I tried soccer when I was in sixth grade and tried out but realized it wasn’t for me. Basketball has always been my main sport growing up,” Parker said.

She moved to High Point, North Carolina with her mother to pursue better basketball opportunities. Parker attended Southwest Guilford High School where she starred on the girls’ basketball team. After high school, she attended High Point University to play basketball from 2010 to 2013. Parker transferred to Middle Tennessee State where she had the best season of her collegiate career in 2015. For the Queens native, the transition from high school to college was a challenge.

“I was ready to go home everyday in the summer because I had never had to run that much in my life. It was testing my strength. Thankfully, the type of mother that I have, she wasn’t about to let me quit. She definitely gave me that peace of mind and words of encouragement to stay and I’m glad I did,” she said.

Parker was picked by the Chicago Sky with the fifth pick in the 2015 WNBA Draft. She spent her first six seasons with the Sky as a contributor off the bench averaging 7.0 points and 4.5 rebounds a game in her career. The six foot four forward recently signed with the Atlanta Dream as a free agent to be close with her family and for business opportunities.

“I’m really interested in entrepreneurship on a lot of different aspects and Atlanta is a great opportunity just for Black-owned businesses, new and small businesses. We got a team (Dream)  full of athletes and players I really am excited to play with. We have so much in common with the underdog mentality and the hungry mentality. It doesn’t matter who you are, when we get inside the lines, it’s go time,” said Parker.

Speaking of the Dream, they are part owned by former WNBA player Renee Montgomery. They were partially owned by former Georgia senator Kelly Loeffler but was forced to sell the team as a result of her condemnation of the Black Lives Matter movement. That led fellow WNBA players to support her 2020 Senate opponent, Raphael Warnock and he won.

“Renee is legendary for that. I was really looking forward to playing with her and I was so sad that she announced her retirement. I’m so ecstatic for her and that’s such a big accomplishment. This is just the beginning. She started something by doing that,” she said.

Off the court, Parker is the owner of Born Queen Boutique, which is a Black-owned business. She started the boutique during the COVID-19 pandemic and learned about finances and creating multiple streams of income. Her business has outfits with slogans that she prides herself on like ‘Different Breed’, ‘Relentless’, ‘I Can and I WILL, Watch.’

“These slogans I’ve always kind of lived by things that I pride myself off of. Different Breed in my mind means I’m a different breed and I’m not your average Joe. It’s going to take a lot to knock me down and I’m relentless. I’m really excited because it’s just the beginning. I’m just locked in on entrepreneurship and trying to build this boutique that I just started.”