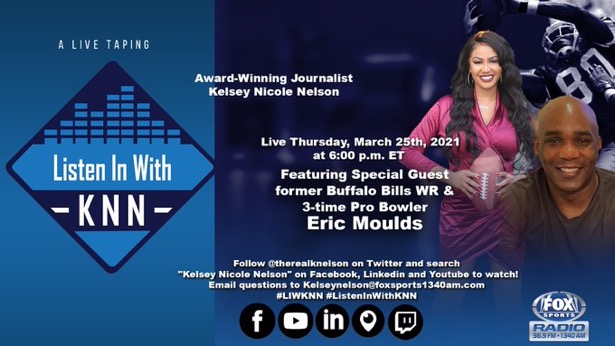 On the latest episode of Listen In With KNN on Fox Sports 1340AM, host Kelsey Nicole Nelson welcomed former Buffalo Bills wide receiver and three-time Pro Bowler Eric Moulds to the show.

He grew up in Lucedale, Mississippi where he originally was a basketball player. His grandfather was a football player and wanted him to get into the sport even though he made a name for himself on the basketball court.

“As an eighth grader, I played on the high school basketball team and I was like, ‘granddaddy, I’m pretty good in basketball and I’m going into my sophomore year.’ He said, ‘I don’t want to watch basketball. I’m a football guy.’ That’s how I got into football,” Moulds said.

While at George County High School, he was a McDonald’s All-American basketball player and got offers to play at Duke, Kentucky and Georgetown to play basketball. Moulds also made his name on the football field as he led the team to their first ever victory against their in-state rival Pascagoula, 20-17 in 1991.

“It was amazing. It was one of those things that you look at Pascagoula, Gulfport, Biloxi and all the big schools, a small school like us competed with those guys. It was good to get a win against a quality football team,” he said.

After high school, Moulds had an opportunity to play college football outside of Mississippi but decided to stay home and attend Mississippi State University.

“I came from a state where we had a lot of football players like Jerry Rice and Walter Payton. At the time, we had guys like Terrell Buckley and Shane Matthews, who played at Florida State and Florida respectively. I really wanted to stay in-state and make my state great. Me and a few other guys from the state decided to go to Mississippi State,” said the Mississippi native.

At Mississippi State, he was a first team All-SEC player and finished fifth in receiving yards and fourth in touchdowns in school’s history. Additionally, Moulds ran on the track team to further enhance his athletic abilities.

“I just wanted to get the experience in college and say, ‘you know. I had a fun time and to get an opportunity to meet and be allowed around other athletes. Just being able to talk to guys and see how they prepare. I think it helped me when I went to the NFL so I can prepare in a way that a lot of guys from different sports do,” he said.

Moulds’ collegiate career translated to the next level as he was selected by the Buffalo Bills in the first round in the 1996 NFL Draft. It was a moment that he never envisioned when he first started playing football.

“I wanted to be a high school player and wind up doing that. I started getting all these offers and thought to myself, ‘what can I really do if I apply myself.’ It was one of those things that I felt like, ‘if I go to Mississippi State or go to college and just be a pretty good player, I’ll be happy and get a degree.’ Once I got the opportunity, I wanted to make the most of it,” said Moulds.

When he arrived in Buffalo, he was excited to play with the team’s star players in Thurman Thomas, Andre Reed, Jim Kelly and Bruce Smith. Two years later, Moulds set a team record with 1,368 receiving yards in a single season, which record stood for over two decades until Stefon Diggs surpassed it in 2020. He could’ve had at least 1,800 yards receiving but there were four games that year that he didn’t even play in the fourth quarter.

“I averaged 20 yards a catch and it’s only a handful of guys that have done it in NFL history. It was extremely difficult to do and you got to make a lot of people miss and make plays. It was exciting because Doug Flutie was a small version of Josh Allen and kept plays alive. He could make every throw and if he was 6’2’, he would be in the Hall of Fame,” he said.

However, his career with the Bills was marked by transition as he had four different head coaches and six offensive coordinators. After spending his first 10 years in Buffalo, Moulds spent his final two seasons with the Houston Texans and Tennessee Titans. He was inducted into the Buffalo Bills 50th Anniversary All-Time team in 2009 and the Mississippi State Sports Hall of Fame in 2015.

When Moulds looks back at his life, he wants to be remembered as a hard worker and teaching kids how to play football.

“I’ve always said if you’re a former NFL, NBA, Major Leaguer and if not, showing kids the way to be successful at sports, then you’re doing yourself a discredit. You can show a kid that doesn’t know how to be fundamentally sound, how to play the game, be smart and become a better player. You’re doing yourself a discredit if you don’t really get involved in young kids’ life because they are the future of the game.”