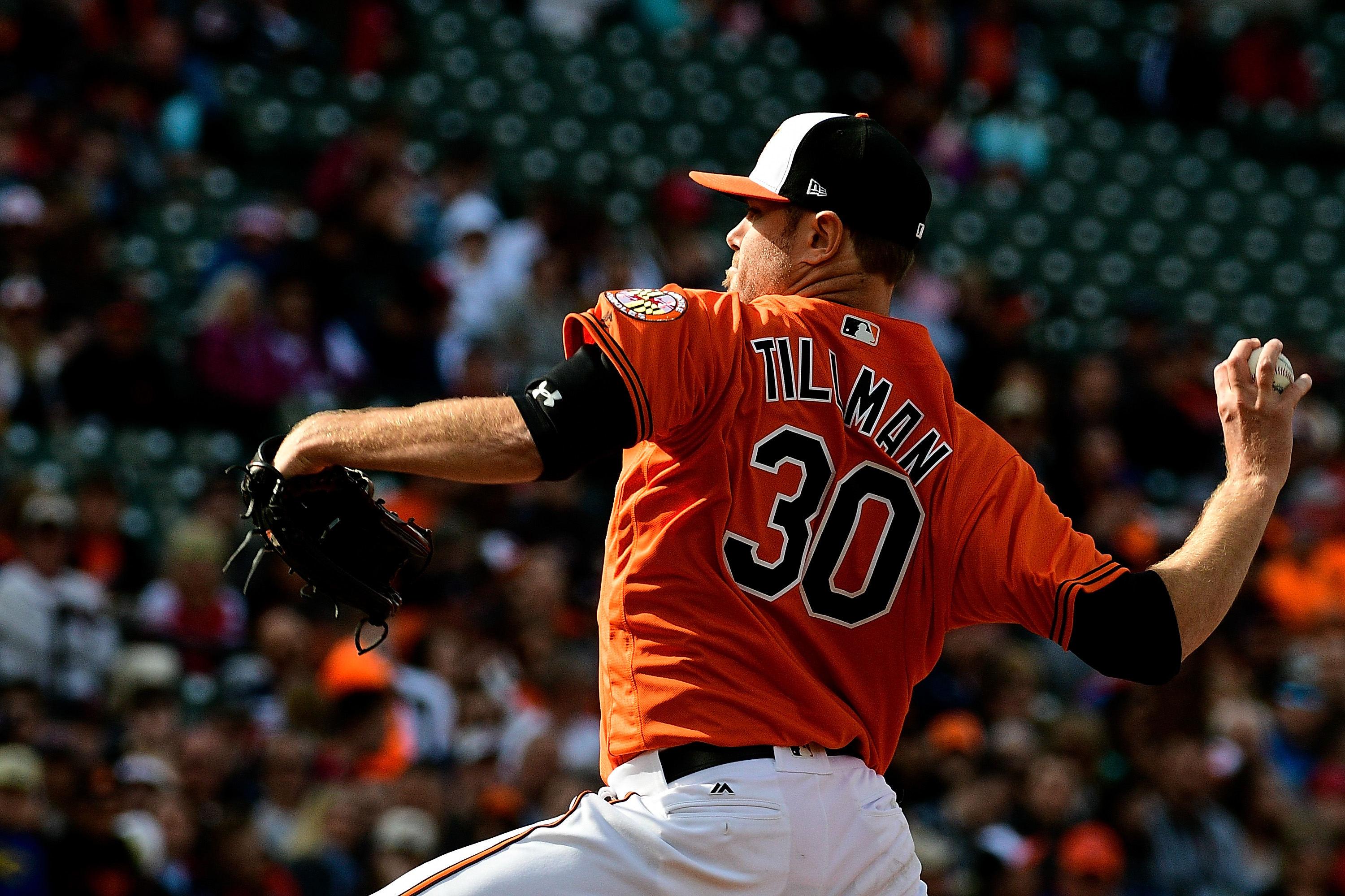 BALTIMORE — Baltimore Orioles starting pitcher Chris Tillman has been in quite the bind this season. Coming into Saturday’s contest against the Cleveland Indians, Tillman has had an 0-3 record and an 11.91 ERA.He had allowed a .550 (11-for-20) opponent batting average with five extra-base hits. Lead off batters had hit .833 (5-for-6) of Tillman this season, with number nine hitters batters hitting 1.000 (5-for-5) against him. With Baltimore often calling up young starters to be placed into long relief in case Tillman struggled in his outings, he would look to change the outlook of his 2018 season.

In the first inning, Tillman was able to get Indians shortstop Francisco Lindor to flyout to center field. Tillman would subsequently allow a five-pitch walk to second baseman Jason Kipnis. After Kipnis’ walk, Jose Ramirez would single to center field on a hard line drive. With Michael Brantley at-bat, Tillman threw a wild pitch to advance Kipnis and Ramirez to third and second base respectively. Brantley would ground out, with Kipnis scoring for a 1-0 lead for Cleveland.

Tillman would start the second inning off with some trouble as well. After Yonder Alonso singled over the head of Orioles shortstop Manny Machado, Tillman threw his second wild pitch of the game to Yan Gomes, with Alonso advancing to second base. He would get Gomes to ground out for the first out. Tyler Naquin would line out to Anthony Santander in right field and then Tillman struck out Bradley Zimmer for the third out.

During the third inning, Tillman would get Lindor to ground out to Machado. Kipnis would but against the shift, reaching first on a single. Ramirez would sting a hard single off of the glove of Chris Davis at first, advancing Kipnis to second. Michael Brantley would ground into a one-pitch double play, getting Tillman out of a jam.

The 29-year old starter would strike out Edwin Encarnacion to start the fourth inning. Yonder Alonso would ground out immediately after to Tim Beckham at third base. With two outs in the inning, Tillman looked to get Cleveland catcher Yan Gomes out. However, Gomes would line a home run to left field. Naquin would nearly hit another home run, with Craig Gentry backing into the catch in left for the third out. Cleveland would lead 2-0 after the fourth inning.

For the top of the fifth, Tillman had a clean one-two-three inning. First, Bradley Zimmer would ground out for the first out. Tillman would strike out Lindor next. To end the inning, Tillman would grab the comebacker off of the bat of Kipnis and toss him out at first for the third out.

Unfortunately for Tillman, the sixth inning would be his roughest inning of the day. He would allow a home run to right field off of the bat of Ramirez. After Ramirez’s home run came a single from Brantley. With Alonso at-bat, Sisco gunned out Brantley at second base, but Alonso would hit a solo home run off of Tillman to give Cleveland a 4-0 lead. Gomes would strike out, ending Tillman’s day.

“I was able to use both sides of the plate with my fastball,” said Tillman. “I think that’s always a big help and my off-speed was there too.”

At the end of the day, Tillman threw 83 pitches with 51 of them being for a strike. He would go six innings, allowing eight hits, four runs (four earned), while walking one batter, striking out five, giving up three home runs and throwing two wild pitches. His ERA is now 9.87 on the season.

“He was better,” Orioles manager Buck Showalter would say of Tillman’s start. “Obviously, there was very little margin for error with [Mike] Clevinger. He [Tillman] did some things a lot better and hopefully it’s something to build on.”

Tillman gave a valiant effort on Saturday, but Baltimore’s batters didn’t give him much run support. From a fifth starter, Tillman is expect to take the ball and give a team five to six innings of four-run or less baseball. That is exactly what Tillman accomplished against the Indians.

Baltimore had just two hits during the game, one being from Machado and the other from Sisco. The club also went 0-for-2 with runners in scoring position and left four men on base during the game. Before left fielder Trey Mancini hurt his knee on Friday and second baseman Jonathan Schoop injured his oblique, Baltimore struggled to hit. With their injuries, it has just compounded the issue.

The Orioles entered the game slashing just .222/.295/.369, which is ranked 26th in the MLB and second to last in the American League. Their team OPS of .663 ranked 23rd in the MLB and 11th in the American League. These numbers will have to raise up if Baltimore can get out of the slump that they are in. With this loss, Baltimore is now at 6-15 on the year, sitting in the cellar of the AL East and 12.0 games out of first place.

Tillman’s next start is expected to come against the Tampa Bay Rays. In Tillman’s three-year splits against the Rays, he has pitched to a 4.82 ERA in 80.1 innings pitched. Tampa Bay hitters are batting .257 against Tillman.