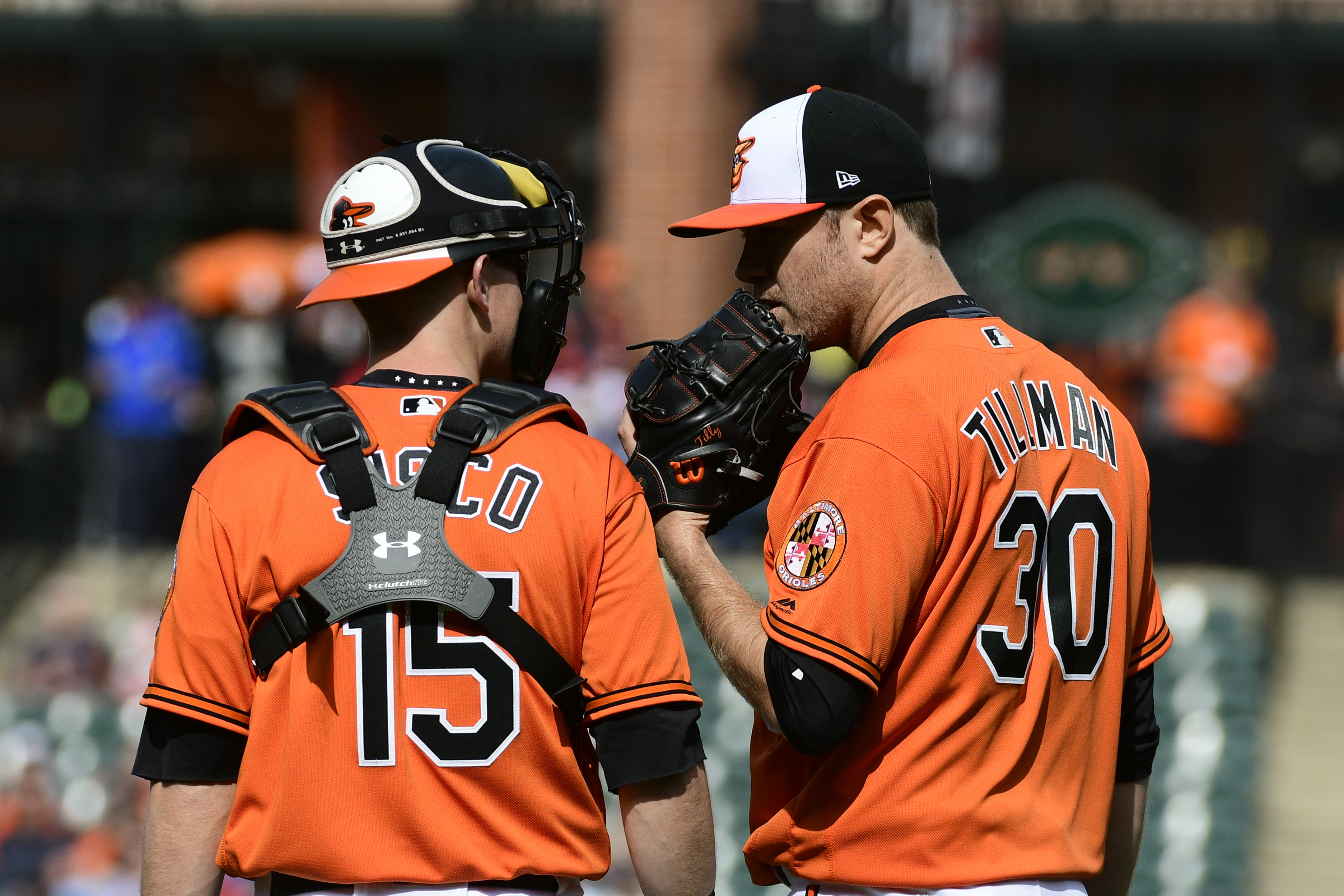 The Baltimore Orioles have now lost nine of their last 11 games.

The announced crowd of 29,187 witnessed the Orioles go scoreless for the second time this season as the offense has generated just 15 runs in the first eight games played at Oriole Park at Camden Yards.

O’s starter Chris Tillman, who entered the contest with a 0-3 record and a whopping ERA of 11.91, had his best outing of the young season, but it was another start in which he gave up a run in the first inning. Jason Kipnis drew a walk on five pitches and Jose Ramirez singled on a ball that just landed in front of Adam Jones. Tillman’s wild pitch on the next delivery to the plate gave the Indians runners at second and third with just one out. Michael Brantley was able to bring one runner home on a RBI groundout, but Edwin Encarnacion’s loud fly ball ended the scoring in the top half of the first. The run scored gives Tillman six runs allowed in the first inning this season.

“The walk killed me,” Tillman said after the game. “The free base ended up scoring, but other than that, I felt good.”

The second and third innings saw much of the same from Tillman as runners managed to reach base and another advanced on wild throws. Fortunately for Baltimore, the Indians failed to cross the plate, but Tillman never looked to be in a comfortable groove throughout. Cleveland was finally able to add to their lead in the fourth inning on a Yan Gomes solo home run that was just out of the reach of Craig Gentry. Tyler Naquin just missed making it back-to-back jacks on the next at-bat, but Gentry made the catch with his back against the outfield wall to end the inning.

The fifth inning was arguably Tillman’s best of the season as he needed just eight pitches to retire the side in order. However, the success could not carry over into the sixth as Ramirez led off the inning by sending a 3-1 pitch into the right field porch to make it 3-0. Two batters later, Yonder Alonso sent Tillman deep to the flag court on another 3-1 pitch to make it a 4-0 lead for Cleveland.

“I fell behind both those guys in that last inning. Stay ahead and I can make my pitches,” Tillman said in the clubhouse after the game.

While it was far from 2013 Tillman that made his only All-Star game, it was without-a-doubt his best outing of the season. He finished after six innings, his longest outing of the season, allowing the four runs on eight hits, a walk, three home runs and two wild pitches, while striking out five. It is the 22nd consecutive game in which Tillman has failed to record a win.

Much will be made of Tillman’s outing, but the Oriole hitters once again failed to back their starter. They were held hitless through the first three innings for the fifth time at Camden Yards this season. Manny Machado broke up the no-hitter with a leadoff single in the fourth, but they could not capitalize on Fransisco Lindor’s error that allowed Machado to reach third base with one out. Baltimore’s starting pitchers have received just 36 runs of support this season, which is third-fewest in the American League entering play.

Meanwhile for the Indians, Clevinger mowed through the Orioles lineup with general ease. He allowed just the two hits, retiring the final 14 batters in order to earn the complete-game shutout.

“The story was their pitcher and our inability to solve much off of him,” Buck Showalter said. “Hit a couple balls had, but that’s about it.”

Alonso’s homer in the sixth landed on Eutaw Street, the first to do so this season. It was the 54th by an opponent and 94th overall since Oriole Park at Camden Yards opened.

Trey Mancini was not in the lineup today after colliding with the wall in foul ground in Friday night’s win. His knee is still swollen, but X-rays, a CT scan and MRI came back negative, and the Orioles are hopeful he can avoid a stint on the disabled list.

Showalter said after the game that Zach Britton will be back on the mound tomorrow after PFP drills today.

Game three of the four-game series will feature Indians ace Corey Kluber, who is 2-1 with a 1.52 ERA in 2018. The last time Kluber took the bump in Baltimore, he tossed a complete-game shutout, allowing just three hits while striking out 11 in the win. He will go up against Orioles newcomer Andrew Cashner, who is sporting a 1-2 record with a 3.00 ERA. First pitch is scheduled for 1:05 p.m. Sunday.