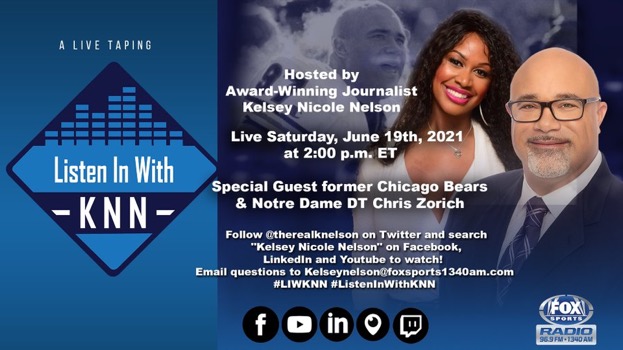 On the latest episode of Listen In With KNN on Fox Sports 1340AM, host Kelsey Nicole Nelson welcomed former Notre Dame and Chicago Bears defensive tackle Chris Zorich to the show.

He grew up as a biracial kid in the south side of Chicago, Illinois. Originally, Zorich wanted to be a fireman because there was a firehouse about five blocks away where he lived. Then, he attended Chicago Vocational High School where he was noticed by the high school football coach as a freshman. The coach gave him a permission slip for his mother to sign to play football.

Zorich’s mother refused to sign it because of the fear that he would get hurt. He did not play in his freshman year but asked for the permission slip the following year. This time, Zorich forged his mother’s name on the slip without her knowledge and got on the field.

“I wasn’t necessarily lying per se but my mom was asking me why I was getting home later and I told her I was involved in extracurricular activities. Halfway through the season, I brought home my jersey and shoulder pads to get it washed because we didn’t have a washing machine at school. My mom saw them and started crying and I explained to her that I was involved in something positive. I was learning how to set goals, leadership and being on the team,” he said.

Zorich got a scholarship to attend the University of Notre Dame. At South Bend, he helped Notre Dame win a national championship as a freshman in 1988. Zorich became a two-time All-American and was named as the United Press International Lineman of the Year in 1989. He was the captain in his senior year while helping the Irish win a record 23 straight games.

“When we added (head coach) Lou Holtz, you had a lot of players who had gone through these terrible losses. So somehow, Lou Holtz was able to combine these older guys with these new young kids who had no idea about what losing is and bringing this new aggressive attitude to Notre Dame. We wound up having this reputation of being the bad boys of college football for a while. That was our style of play and that wound up turning things around,” Zorich said.

He graduated from Notre Dame with a Bachelor of Arts degree in American Studies in 1991. Zorich was drafted by his hometown Chicago Bears in that same year in the second round. He spent his first six seasons with the Bears before finishing the final year of his career with the Washington Football Team. During Zorich’s NFL career, he started law school as he was taking classes at night. Eventually, the six foot one and 282-pound defensive tackle received his Juris Doctor degree after his career ended.

“For me, I wanted to do more and I thought more was going to law school and wanted to become this great Civil Rights attorney. I got to law and realized that wasn’t my cup of tea. I love me some lawyers and went through the whole process. I loved the practice and the idea of thinking in a different way,” he said.

Zorich worked as a partner at a law firm and was the athletic director at Prairie State College and Chicago State University. Additionally, he has his own podcast called The Zorich Podcast. For Zorich, it was about having a plan after football.

“There’s so many seminars and entrepreneurial opportunities for players now and they should take advantage of it. Having a chance to participate in athletics, I thought was important because I wanted student athletes to learn from my experience. One of my mentors explained to me that if you always give the student athletes opportunities, then they’ll be successful.”