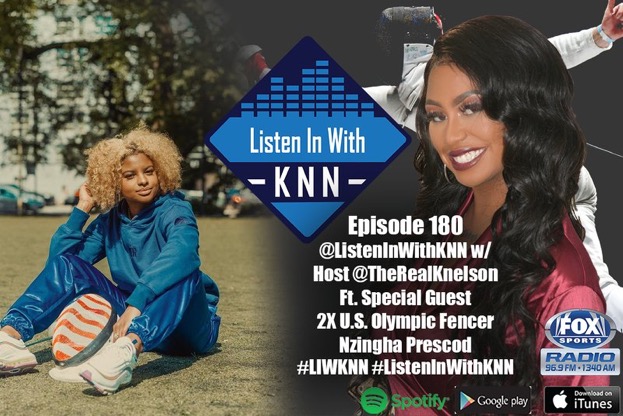 On the 180th episode of Listen In With KNN on Fox Sports 1340AM, host Kelsey Nicole Nelson welcomed two-time U.S. Olympic Fencer Nzingha Prescod to the show.

Her journey to fencing began in Brooklyn, New York where she was born and raised. Prescod started off her athletic career at three years old doing ballet. Then one day, she found out about fencing after seeing her mother read a newspaper article about the prestigious Peter Westbrook Foundation, which is a New York City based fencing clinic for youth from underserved communities. As a result, Prescod’s mother put her in the program and never looked back.

“They saw our talent and they gave us scholarships. We had this opportunity to train with the Olympic coach when I was 10 years old. It was like I’m never going to find another opportunity like this. I really cherished the gift because it was something so unusual. I was from the suburbs of Brooklyn and no one else around me had this caliber of opportunity,” she said.

Additionally, Prescod took her fencing talents to Columbia University because she liked their fencing team and it was close home . She earned a Bachelor’s degree in political science with a concentration in race and ethnicity.

“It was part of the equation for me to continue competing and qualifying for the Olympics and World Championships. It just made sense to stay with my coach and also have a team that would be competitive to train. It worked out very well,” Prescod said.

She established the Fencing in the Park (FITP) in Brooklyn, which is a community-based outdoor summer series introducing fencing to children of color that are unlikely to have access to see it. The program has enrolled more than 40 kids from unrepresented neighborhoods in New York such as East Flatbush, Brownsville and Crown Heights.

“The only way I knew of fencing and access to fencing was because of Peter Westbrook’s vision and legacy. The concept of giving back and sharing the gift of fencing is something that we started at a young age. Fencing itself, you understand what’s necessary to be action-oriented, problem solver and strategic just in the game of fencing. Fencing is super unique in that it has that component of strategy, planning, problem solving, physical and the fortitude involved,” she said.

“The office is something that is a very early step towards getting the city to support equal access to sports. It’s something that I had been lobbying for, infusing sports into education and opening up access to quality sport education. I’m pitching this idea of how do we integrate sport into everyone’s lives at an early age so that they’re not only able to access sport later on but also have better physical literacy in our communities.”

Fencing in the City with Nzingha Prescod