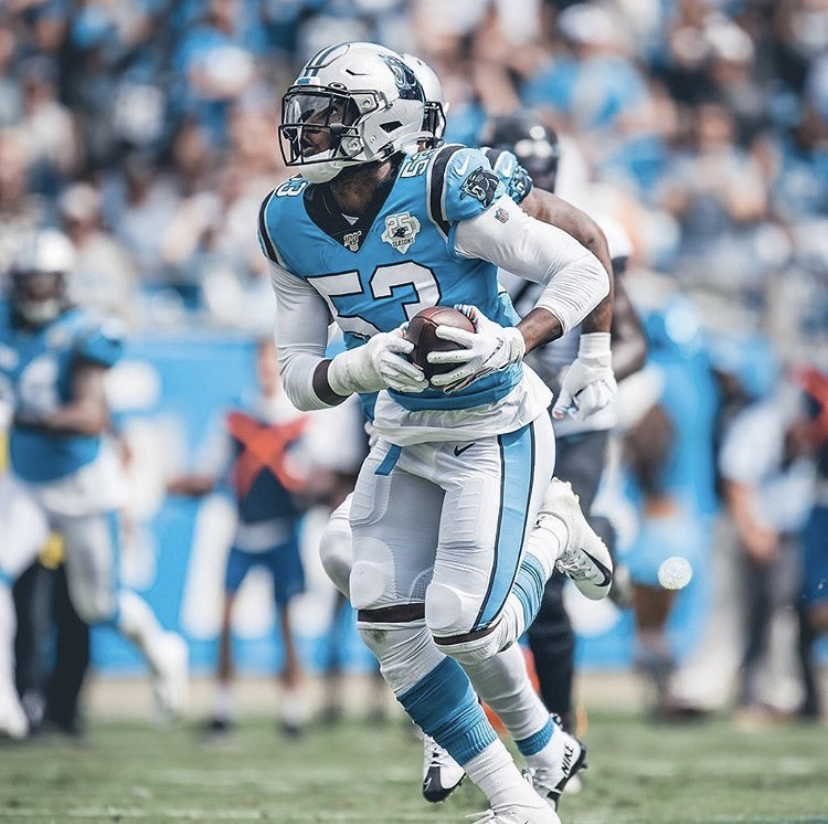 When the NFL released the schedule in the spring, no one imagined a Kyle Allen-Gardner Minshew showdown in Week 5, yet that is exactly what everyone got. Thrust into starting roles due to injuries to starting quarterbacks Cam Newton and Nick Foles, the two young guns have responded favorably. So favorably, in fact, that Minshew came into Sunday’s game having been named the Offensive Rookie of the Month after passing for 905 yards and seven touchdowns en route to a quarterback rating of 106.9. Allen has been equally impressive, passing for 493 yards, four touchdowns, and no interceptions after taking over for Newton in Week 3.

Each team struck early with Carolina running back Christian McCaffrey somersaulting into the end zone to put the Panthers on the board first. The lead didn’t last long as Minshew orchestrated a 75-yard scoring drive that only took 1:56 off the clock. That is when the Panthers, boasting the top-ranked pass defense in the league, upped the ante. With roughly 3:31 left in the first quarter, Carolina safety Eric Reid recovered a Minshew fumble at the Jacksonville 24-yard line. The Panthers capitalized on the turnover as Allen found McCaffrey over the middle for an 18-yard touchdown to give the Panthers a 14-7 lead.

That defensive line that has the league buzzing started the second quarter off with a bang as defensive end Mario Addison got the strip sack and rookie Brian Burns scooped the fumble, racing 56 yards for the score. Of the play Burns says he was just thinking, “go fast, play fast”.

“I think that was on one of my first couple of plays in. I was just thinking go fast, play fast. He dropped to cut-block me, I played the cut. Mario Addison did a great job pushing his guy to the quarterback to cause a fumble. I saw the ball. See ball, get ball, and take it to the end zone.”

The Jaguars did not go away quietly as Minshew connected with DJ Chark Jr for his second touchdown on the day bringing the Jaguars within 7. It was a rough day for kicker Joey Slye, who had been solid since taking over kicking duties during Graham Gano’s absence. Slye’s first field goal attempt was blocked and he later missed a 46-yard attempt and an extra point attempt. Following the game, Slye talked about bouncing back.

“I’m going to look at some film, I’ve got some coaches that I work with. We’ll talk this weekend. Just kind of see the things I missed, the things that put me in a situation where I wouldn’t miss and then keep refining the technique. Honestly you can’t approach it any different. You’re going to have good days and bad days. You’ve just got to come in with the same mentality every week.”

McCaffrey continued his quest to break every franchise record there is as he opened up the second half with a 84-yard jaunt for his third touchdown of the day and the longest run in franchise history. McCaffrey later tightened up, leaving the game in the fourth quarter giving way to backup Reggie Bonnafon. A quarterback turned running back, Bonnafon made the most of the opportunity scoring on a 59 yard run up the middle to increase the Panthers lead to 34-27. Slye’s missed extra point left the door open for the Jaguars who, despite three turnovers, were still in good position to tie or win the game. Minshew took responsibility for the turnovers, which were all fumbles.

“Played well for the most part, but had three turnovers. Those are all on me, that can’t happen. When stuff like that happens, sometimes you don’t give yourself a chance win. That’s what I feel like we did, what I did.”

It was not until Carolina linebacker Luke Kuechly batted away a Minshew pass on the goal line that the Panthers could breathe a sigh of relief. As the sounds of “Sweet Caroline” filled the stadium, the players were happy to get their first home win of the season after starting 0-2. The win made head coach Ron Rivera the winningest coach in franchise history and also sets the tone for the team’s trip across the pond next week to face NFC South foe Tampa Bay.

Mario Addison talked about the upcoming trip. “A win is a win. We play in London next week and it’s going to feel better flying all the way out of the country to play the Tampa Bay Buccaneers. It’s going to feel good coming off a win, man. We definitely deserve it, and we still haven’t scratched the surface yet. We still haven’t had that dominant game that we know we can, but I know these guys want it and I want it as well.

The Panthers will ride a 3-game winning streak into next week’s matchup with the Bucs who were the last team to beat them, 20-14 at Bank of America Stadium. Minshew glowed in the Jaguars loss, passing for 374 yards and two touchdowns. Chark had 164 receiving yards and two touchdowns. Allen threw for 181 yards and one touchdown while Christian McCaffrey got the hat trick, rushing for 176 yards and hauling in 6 catches for 61 yards. Although he did not make it into the end zone, Panthers receiver DJ Moore was impressive with 6 catches for 91 yards.

Sunday’s game against the Buccaneers will kick off at 9:30AM, EST.