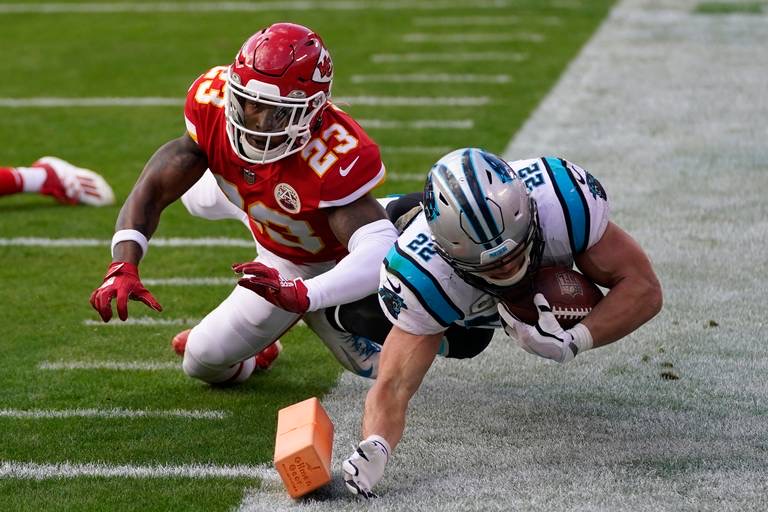 With the odds stacked heavily against them, the Carolina Panthers headed to Arrowhead Stadium on Sunday to face the Kansas City Chiefs.  The Panthers looked to have a boost from the returns of running back Christian McCaffrey, cornerback Rasul Douglas, and defensive end Yetur Gross-Matos.

Panthers offensive coordinator Joe Brady and the Panthers ate up almost nine minutes and burned two timeouts on the opening drive.  Quarterback Teddy Bridgewater and the Panthers went with the gutsy move to go for it on fourth down were rewarded with a 9-yard touchdown reception by McCaffrey.  There was more early aggression from the Panthers in the second quarter when punter Joseph Charlton connected with Brandon Zylstra for a 28-yard gain on a fake punt.  The drive concluded with a 14-yard touchdown reception by Curtis Samuel to put the Panthers up 14-3.  After settling for field goals, the Chiefs hit pay dirt on their third possession when Mahomes connected with Demarcus Robinson for a 1-yard touchdown.  A 47-yard field goal from Joey Slye sent the Panthers into halftime with a 17-13 lead.

Kansas City got the ball to begin the second half and ended the drive empty-handed as kicker Harrison Butker missed a 48-yard field goal attempt.  The Panthers returned the favor with a missed field goal of their own as their third quarter offensive struggles continued.  Kansas City was 55% on third down conversions and got a huge one by way of a 44 yard reception by tight end Travis Kelce.  As Kelce extended the drive, Kansas City running back Clyde Edwards-Helaire found the end zone and gave the Chiefs their first lead of the game going into the fourth quarter.

As Kansas City increased the lead with a Tyreek Hill touchdown, the Panthers remained poised, scoring on a quarterback draw with 10:26 left in the game.  In a gutsy move, the Panthers attempted an onside kick but the Chiefs recovered and Hill added his second touchdown of the quarter and the afternoon.  The Panthers still were not done as McCaffrey found the end zone for his second touchdown of the day to pull the Panthers within 2 with 1:55 left to play.  There was another failed onside kick attempt but the defense held and gave the Panthers one last shot – a long shot, but a shot nonetheless.  Two weeks after attempting a would-be NFL record 65-yard field goal in New Orleans, Slye missed on a 67-yard field goal attempt that would have given the Panthers the 1-point win over the defending Super Bowl champs.

The game was sloppy for both teams in terms of penalties with the Panthers flagged twelve times for 82 yards.  The Chiefs were called for eight penalties for 75 yards.  The loss drops the Panthers to 3-6 while the Chiefs improve to 8-1.  Carolina heads back to Bank of America Stadium where they will host NFC South divisional foe Tampa Bay in Week 10.  The Buccaneers won the first meeting 31-17.