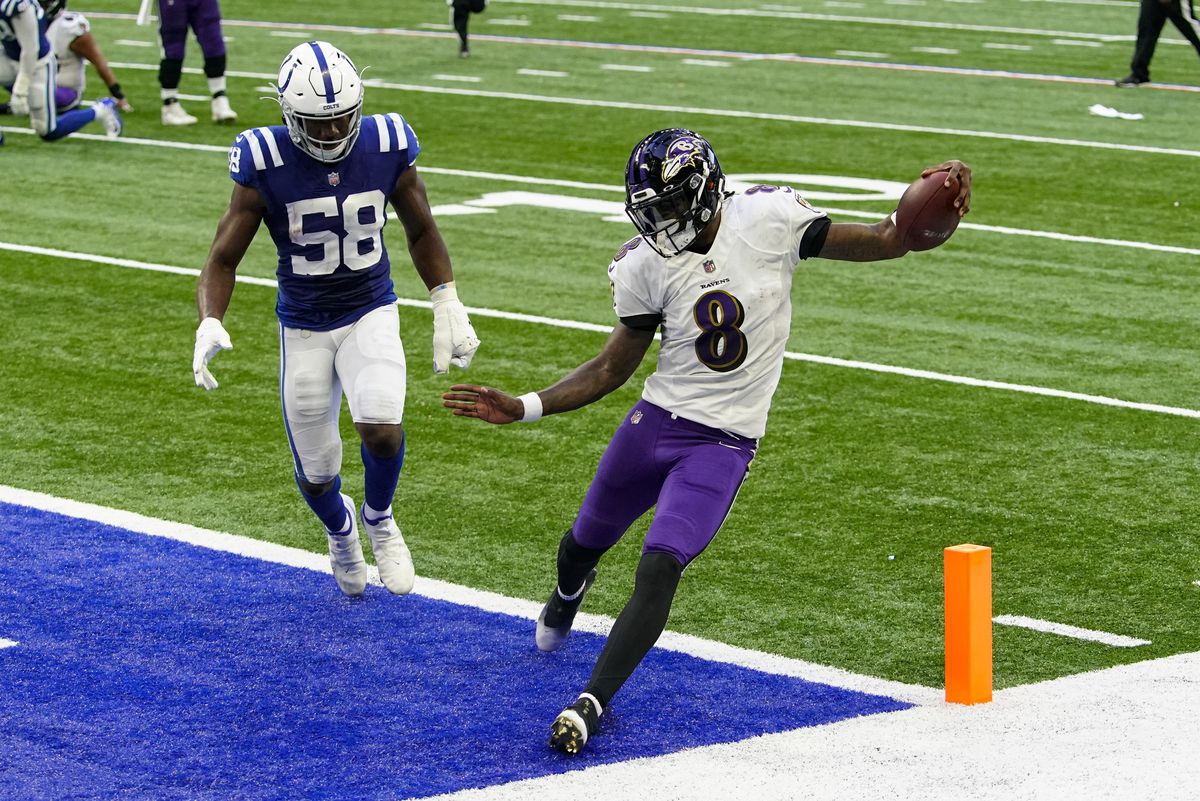 After suffering another loss against a high-quality opponent, the Baltimore Ravens have unfortunately established the perception of their inability to win against elite teams in the NFL. The Baltimore Ravens are now (0-2) against teams who are undeniably playoff contenders losing to the Kansas City Chiefs & Pittsburgh Steelers who have a combined record of (15-1).

Baltimore looked to rebound this week against a well-coached team, being the Indianapolis Colts. The Ravens were able to compose a win against a solid Colts team, illustrating they can be more resilient than they’ve shown in previous matchups coming from behind to get the win.

Baltimore went into the 2nd half being down 10-7, hoping to regain their confidence by establishing their run game. As the game progressed, the Ravens were able to accomplish their objective.

With the absence of Mark Ingram II, RBs J.K Dobbins & Gus Edwards split the workload. The Ravens have the best rushing offense in the NFL; however that’s mostly contributed to Lamar Jackson.

The RBs themselves have struggled to consistently produce. This game further displayed their lack of production. Dobbins and Edwards had a combined 23 rushes for 53 yards and 1 TD. Nothing spectacular, nonetheless it was consistent, which benefits the offense.

In fact, the turning point of the game occurred when Jackson scored a 9-yard rushing TD on an RPO. That play was a direct result of the rushing attack Baltimore established in the 2nd half. Jackson’s TD gave the Ravens 21-10 lead.

Jackson completed 19/23 passes with 170 passing yards. Jackson also rushed for 58 yards with 1 TD. This was definitely a solid performance for the 3rd year QB.

Baltimore’s defense shut out Indianapolis in the second half. The Colts defense provided their offense with numerous opportunities to generate points however they were unable to capitalize.

It’s evident that the Colts need a new QB and should prioritize getting one during the offseason. Philip Rivers’ TD-INT ratio is borderline horrendous, having 10 TDs to 7 INTs on the season.

Are the Ravens contenders?

ESPN has the Colts ranked as the 11th best team in the NFL as of Week 9. However their record indicates that narrative can be debated. With that being said, the Ravens still have to prove themselves as a legitimate playoff contender moving forward.

Baltimore is scheduled to face two of the current top-10 teams NFL, both the Tennessee Titans and Pittsburgh Steelers within the span of three weeks. Given those circumstances, Baltimore will have multiple opportunities to authenticate their status as an elite team.

Going into week 10, the Ravens will be looking to build on their momentum against the New England Patriots. This game will played at Gillette Stadium on Sunday Night Football at 8:20 p.m. E.T.