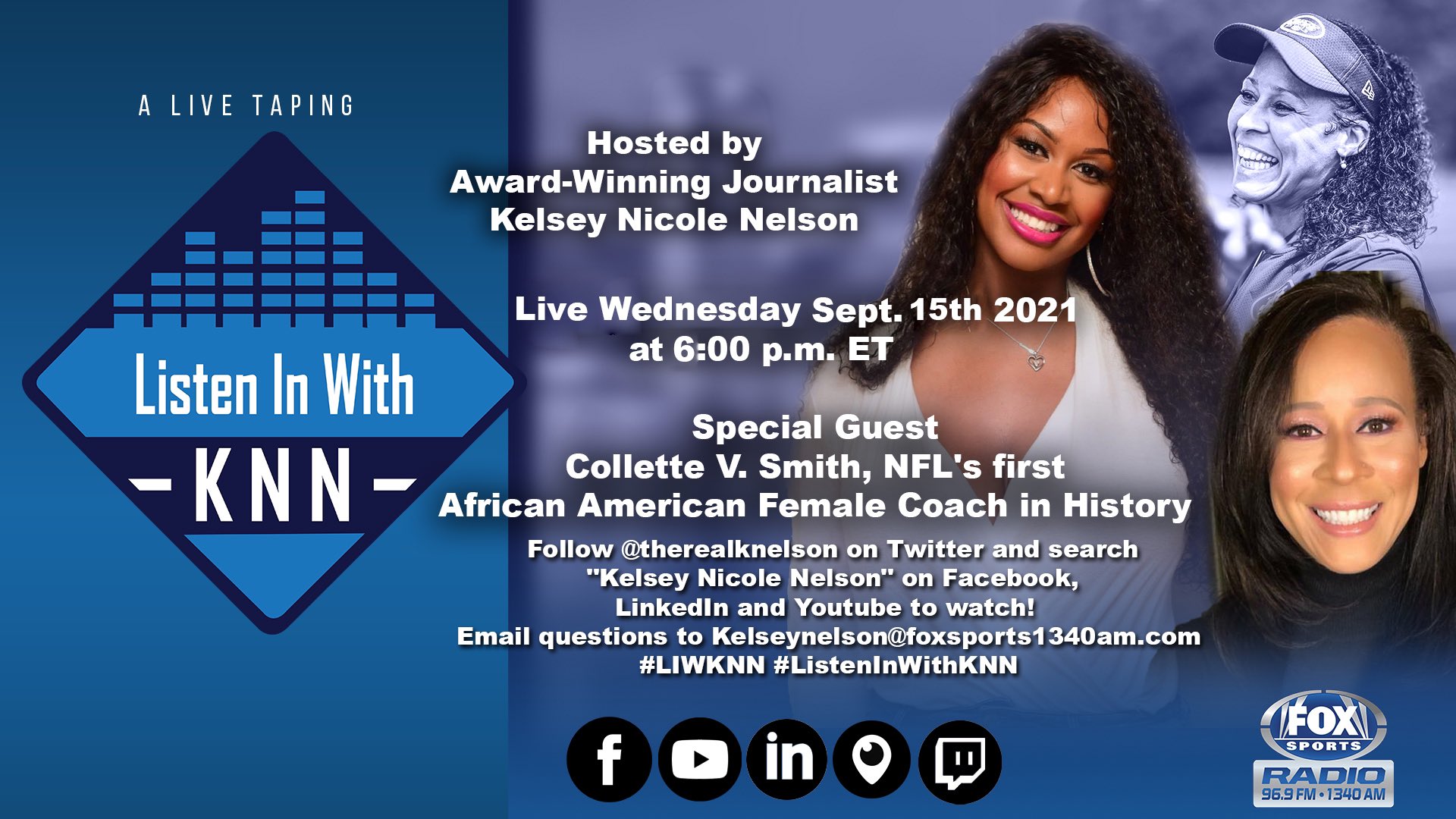 To start, Nelson asked Smith about where her love for football sprouted from. “I was a kid that loved sports and games the same way any other kid would…but, I was a girl that was like ‘I want to cheerlead and play the game’…I wasn’t allowed to play football because of my gender so it wasn’t until I was 42 that I got to play professional football,” said Smith.

Smith would go on to play three seasons with the Sharks as a defensive back. When she was ready to retire, the team’s owner would approach her to stay saying, “Collette, I know you said you’re retiring, you’re 45-years-old…we don’t want to lose you.’…I said ‘I’ll be around..I’ll be at games and practices here and there,’” said Smith.

Smith deeply loved the New York Sharks organization. The team’s owner, “She goes, ‘no, we want you to be a coach.’ My initial reaction was ‘I’ve never coached.’…she looked at me and she said ‘Collette, you’ve been coaching since the first day you got here,’” said Smith. Once she took the position to be a coach and marketing director for the organziation, Smith fell even more in love with football. “The game of football that I loved as a baby, as a child, became that much more euphoric for me,” said Smith. She now saw the game of football in a completely different way.

As the director of marketing, Smith would tag and reach out to the New York Jets calling the Sharks their “sister” team on Facebook. She kept up the rapport with the organization on social media and eventually ended up asking the Jets for equipment and resources for their fellow New York team. The Jets would soon take notice, and began to send resources, and allow the ladies to use their practice fields.

Additionally, Jets superfan, the late Bruce Reeder, would help organize a pack of passionate Jets fans to attend the Sharks games in their green and white attire. “It was a big deal…it was just about the love of football and promoting women in football to give us the respect we deserve,” said Smith.

Smith would then become friends with the then head coach of the Jets, Todd Bowles. In 2017, Bowles would become the person to make the historical decision to name Smith the first female coach in New York Jets history and the first African American female coach in NFL history.

At that time, Smith didn’t know of the immense impact she had made for women’s representation in football. She would be told about this by female tennis icon, Billie Jean King, at the 45th-anniversary Title IX celebration. Title IX is the federal law that prohibits exclusion from educational and/or activity programs that receive federal assistance on the basis of sex.

King told Smith, “So you being the first black woman to coach in NFL history, do you have an agent or a manager or a publicist?” Smith was confused and replied to King, “No and what are you talking about?” Finding out this grand honor could not have happened in a better way or by a better icon of sports. Smith was excited to see King that night as she and her dad were big fans of King.

Seeing other women being hired for coaching jobs in the NFL like the Washington Football Team’s Jennifer King makes Smith very proud. Her reaction to the hiring was, “The start of equality. The start of womanhood. The start of people recognizing womanhood…I feel proud,” said Smith.

Smith is also the founder, president, and CEO of “Believe N You, Inc.”, an organization dedicated to living your best life and having confidence in yourself. The name comes from her father’s words telling her to believe in herself after she got the coaching job at the Jets.

Smith has endured lots of pain in her life such as abuse and a struggle for survival. Nelson asked her what she would say to others who are in that position now. “Know you’re built to win. You are here for a reason…I want you to see the greatness that you didn’t allow yourself to see yet, but it’s there,” said Smith.

Like in sports, we should focus on winning, and if we don’t win, learn how to come back even stronger. “Operate on hope. Operate on belief. Operate on I’m gonna win. And if I lose, I just learned something to win tomorrow. Let’s make tomorrow better today,” said Smith.

Smith’s hometown of Queens, NY was heavily affected by Hurricane Ida which devastated various places across the United States in late August 2021. You can help support Smith in reestablishing her life by donating to her PayPal (@cvs28), Cash App ($ColletteVSmith), Venmo (Collete-Smith-4), and Zelle (cocovee1@yahoo.com).