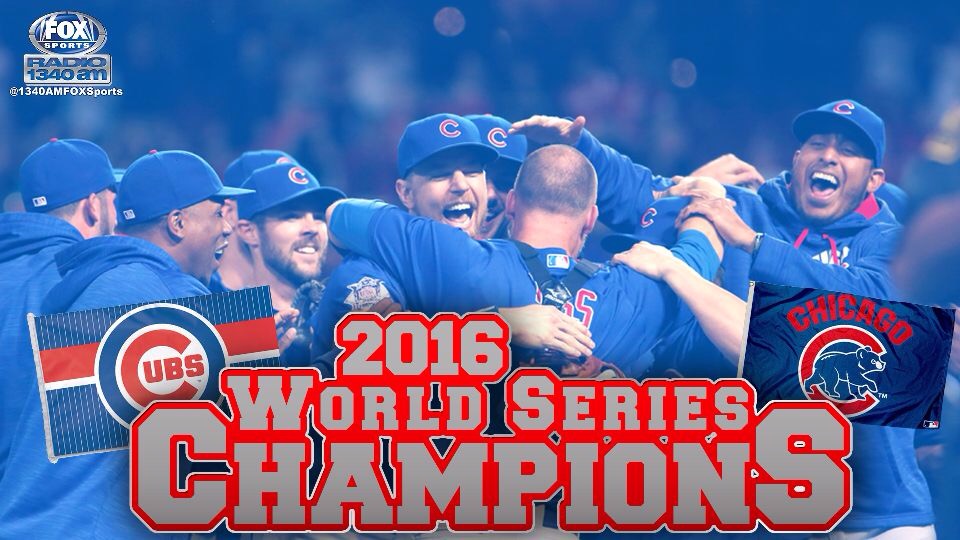 CLEVELAND– After 108 years of frustration, heartbreak, misery, and anguish the Chicago Cubs have reached the top of the baseball world. The Cubs came back from a 3-1 deficit to defeat the Cleveland Indians 8-7 in a best-of-seven series. This is Chicago’s first world series title since 1908. Ben Zobrist’s 10th inning RBI double broke a 6-6 tie for the Cubs to hold on. Chicago joins the 58 Yankees, 68 Tigers, the 79 Pirates and the 85 Royals as the only teams who erased a 3-1 deficit to win the world series on the road.

The drama went to an all-time high in the eighth inning. Chicago led 6-3 and pitcher Jon Lester, who was pitching relief after two days rest, set up for closer Aroldis Chapman. Lester left the game leaving Jose Ramirez on base with two outs. Chapman’s first batter Brandon Guyer would bring in Ramirez on a RBI double. Rajai Davis was next to hit and he would swing the momentum of the game. Davis launched a 340-foot two-run home run to the left-field seats. The home run was his first since August 30th for Davis. Chapman would escape the inning with the game tied. This was his first home run allowed since June 18th when Minnesota Twins catcher Kurt Suzuki smacked one against him.

Chicago controlled the game early as outfielder Dexter Fowler smacked a 410-foot lead-off home run off Cleveland ace pitcher Corey Kluber. The first lead-off home run ever in a game seven world series. Fowler was 4-for-26 before that home run.

In the third inning, the Indians tied the game on a Carlos Santana RBI single, the Cubs would take a 3-1 lead in the fourth inning. Cubs Kris Bryant scored a run after Addison Russell’s sacrifice fly, followed by a RBI double by catcher Wilson Contreras bringing in Ben Zobrist. Kluber was done after Javier Baez homered to deep centerfield to lead off the fifth, putting the Cubs up by three runs.

Kluber, who pitched on three days’ rest for the second consecutive outing, allowed six hits and four runs over four innings and didn’t strike out a batter.

Lester came on for Hendricks in the fifth, along with David Ross, who was playing in his last big league game. Cleveland proceeded to score a pair of runs on a Ross error followed by a two-run wild pitch from Lester. The 39-year old Ross in the sixth inning would blast a 406-foot home run.