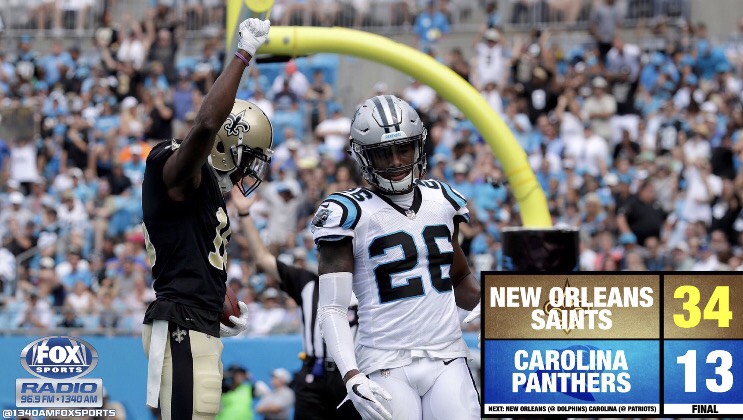 The Carolina Panthers suffer their first loss of the season at the hands of divisional rival New Orleans.

Even though the Carolina Panthers were undefeated entering Week 3, the team entered with plenty of questions, especially on the offensive side of the ball. Those concerns were on full display as the Panthers struggled to put points on the board, as the Saints smacked them around.

The Carolina Panthers offense started fast and had the look of what many expected leading up to this season. The duo of Jonathan Stewart and Christian McCaffrey either had a carry or where targeted by Cam Newton on 12 of the first 13 plays of the game.

The offensive success seemed to end before the drive did. This ended up being the Panthers longest drive of the game but was cut short by a Cam Jordan sack. The Panthers were forced to settle for their first of two field goal in the first half.

Outside of McCaffrey, the offense sputtered and Cam Newton struggled to find any kind of rhythm. He finished the game with only 167 passing yards but it was turnovers that was the story in Week 3. The Panthers quarterback had three interceptions, the most in a game since Week 17 of 2016. He also had two fumbles on sacks but didn’t lose either.

Newton after the game “Moving forward, there’s no need to panic, there’s no need to rush, there’s no need to be up in arms about our situation,” Newton said in his postgame press conference. “Should you be frustrated as a fan? Absolutely. I’m frustrated with my lackluster performance and knowing that we are better than the performances we’ve been putting on the past couple of weeks. But listen – just be patient and know that big things are ahead for us. This year’s Panthers team has big things to do.” With the Panthers going to New England next week, it may spell even more trouble for this offense and wait there’s more.

The bad news may not stop at just the loss either for this offense. After losing Greg Olsen with a broken foot in Week 2 against the Buffalo Bills, the team saw Kelvin Benjamin leave early in the first half with a knee injury. The Panthers’ top wide receiver was not able to return and it remains to be seen if he will miss any extended playing time.

The biggest surprise from Week 3 was the struggles of the defense, which has looked dominant in the early part of the year. However, this group failed to do what made them successful, which was stop the run and put pressure on the quarterback. The Saints’ offense finished with 149 rushing yards and averaged 5.5 yards per carry.

The Panthers defense also struggled to put pressure on Drew Brees, who finished the day with three touchdown passes. The Saints quarterback looked comfortable in the pocket as the Panthers’ defensive line couldn’t get much of a push and finished with only one sack and four QB hits.

The Carolina Panthers will need to get over the loss quickly as they head to Foxboro to take on the defending Super Bowl champion New England Patriots.