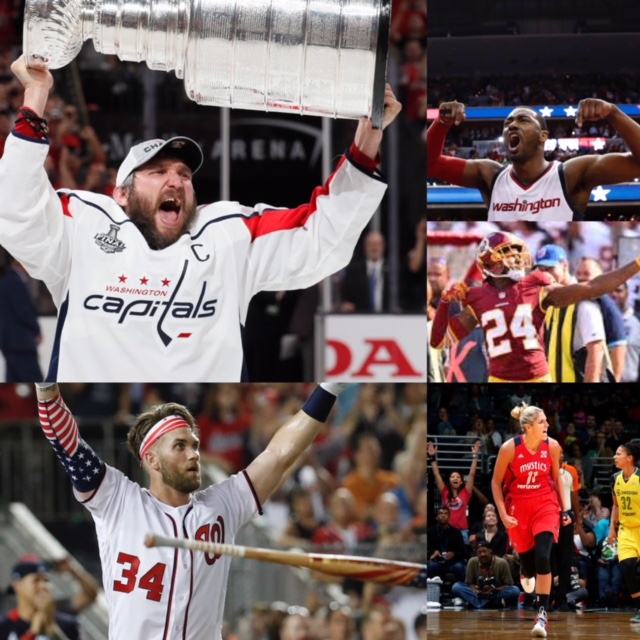 The Capitals won the Cup last month. Redskins training camp starts next week. The Wizards actually made moves during free agency. The Nationals are hosting All-Star Weekend and are in prime position for another October run. Lastly but certainly not least, the Mystics (yes, the WNBA’s Washington Mystics) are currently in first place in the Eastern Conference and fourth in the entire league. It’s fair to say D.C. sports are on the rise.

So with all the current success in the D.C. sports world and the feel that the curse is finally over; the question lingers: what kind of sports town is the Nation’s Capital?

During the Stanley Cup Finals, over 100,000 people flooded the streets, whether the Caps were at Capital One Arena or in Vegas, the region rallied around the historic run. While many of the people who celebrated are legitimate full-time Capitals fans, there were a good share of people who simply wanted to celebrate the city’s first championship in 26 years.

As the city and government prepared for the victory parade, they predicted about 100,000 people to attend; this week Washington D.C. mayor Muriel Bowser announced that in actuality around 500,000 people were in attendance.

Immediately following the parade, no matter where you went in the DMV, you found yourself in the middle of an after-party and immersed in a sea of red. It took about a week after that for drivers to finally stop using their car horns to start our famous “Let’s Go Caps” chant.

Even without the United States in the 2018 FIFA World Cup, social media timelines were filled each and every day with soccer talk. From who we were rooting for in a particular match, to the big names being sent home early, and the Cinderella run of Croatia; everyone was on board in someway.

However, as soon as the France/Croatia Final ended on Sunday, it became apparent to everyone. Football is here now. Granted training camp doesn’t start until next week for most teams; the rest of Sunday and every moment since has been filled with trash talking, hot takes, and bold predictions; especially to and from Redskins fans.

One of the most passionate fan-bases in the league, Redskins fans will not hesitate to tell you about your team and something about yourself while they’re at it. The difference between them and other NFC East fans is that most of them have the capability of being transparent when their team is stinking up the joint; which in turn may be why even as a Ravens fan, I don’t mind finding myself supporting the Washington football team given the right situation.

With an improvement at the quarterback position and another year of experience throughout the roster, a playoff appearance isn’t out of the question for Washington this season. While even their own fans would tell you thoughts of making the Super Bowl are beyond a reach, there is no doubt that if it were to happen, the numbers we saw for the Capitals parade would pale in comparison to a Redskins Super Bowl parade.

There is no need to relive the misery that was the 2017-2018 Washington Wizards season. From finishing 8th in the conference after holding the 3-seed at one point, to losing in six games, at home, in the first round of the playoffs. Most Wizards fans were only concerned with what the team was going to do in the off-season to make improvements.

It took awhile for moves to be made and while fans were certainly happy to see the departure of Marcin Gortat, receiving Austin Rivers in return didn’t exactly go over so well. Follow that up with a first-round draft pick being spent on a guy seemingly no one had heard of before; and General Manager Ernie Grunfeld had more people calling for his job than before, and that’s truly saying something.

Next was free agency. One day passed, two days passed, three days passed. There wasn’t a single sign that Wizards management was aware the free agency had begun. Mike Scott was lost in a move most knew was coming but still didn’t accept considering Scott was the Wizards’ most productive bench player last season…by far.

We wanted DeMarcus Cousins more than anyone but it was apparent a lot of financial strings would need to be pulled to accomplish such an acquisition. Some fans, like myself, were willing to see those sacrifices made to acquire Boogie, others weren’t and that’s understandable as well. Eventually Boogie went to the Warriors and the Wizards were coming to terms with bringing home Jeff Green. While he’s no Boogie, Green can come off the bench with solid production and even fill a starting position if needed.

Through all of this, John Wall’s one simple request had yet to be met, an athletic big. Enter Dwight Howard. Say what you want about his attitude, care to win, or locker room influence. Howard can still surprise you with a 30/20 performance on any given night and is the definition of an athletic big.

With LeBron now on the West and the East seemingly wide open, who knows how the Wizards will perform in this upcoming season, but if they carry on the winning electricity throughout the city right now, a conference finals appearance could be in the works.

The Nationals have become an October staple, not that they’ve had much success once getting there, but making the playoffs has become routine for the 2-time defending NL East champions. This year hasn’t exactly gone as smoothly. After suffering one of the worst first-half injury bugs I can remember witnessing; the Nationals enter the All-Star Break 3rd in the division and with a record at .500 for the first time since 2011. This break is usually when the contenders separate themselves from the pretenders in preparing for the late summer stretch.

Nats star Bryce Harper might have given fans the jolt of energy they needed heading into the back-stretch during his historic Home-Run Derby performance in front of his home crowd. Hitting 9 homers in his final 47 seconds of regulation is something that we may never see again and ignited fans both in Nationals Park and on social media.

With the trade deadline coming up in two weeks, baseball is one of the most unpredictable second-halves in sports. Maybe the Nationals are just taking a page out of the Capitals’ book; hover around with a regular season just good enough to make the playoffs and shock the world with an unexpected World Series run.

Speaking of unexpected runs, who called the Washington Mystics being at the top of the Eastern Conference with the fourth-best record in the league this late in the season? While I expect that most people who lay eyes on this article don’t watch, let alone respect, the WNBA; the parity throughout the league this season has been the best in any league of any sport in recent memory.

Led by superstar Elena Delle Donne, who just become that fastest player to 3,000 points in league history, the Mystics are on a run of their own and bringing their first championship to Washington D.C. is not out of the question come this September. While it’s apparent through the popularity of the league that the Mystics aren’t at the top of sports fans’ totem pole; perhaps a Finals appearance or win will change the narrative around the city.

Whether you root for all of the D.C. sports teams, just one of them, or somewhere in between; you can not help but deny the passion each fan-base throws behind their squad year-around, win, lose, or draw. The Capitals set the DMV ablaze and truly got everyone in the city believing the curse is over; but with that said if no one else follows up with a championship run of their own, it becomes a fair question to ask: Is Washington D.C. officially a hockey-town?