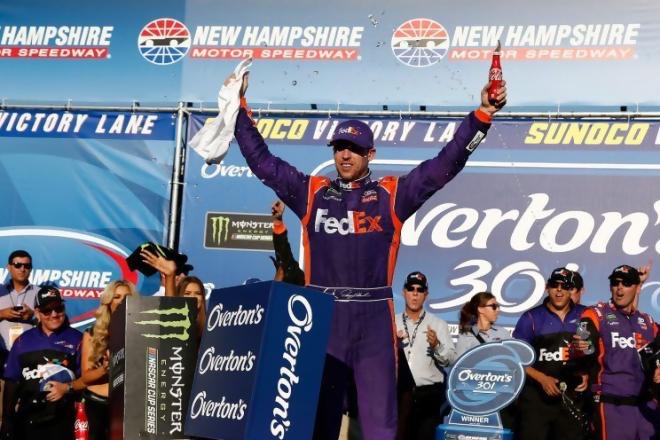 Denny Hamlin brought home the Checkered Flag at New Hampshire Motor Speedway Sunday afternoon. Hamlin, who entered the day with a 28 race winless streak, had not won since the fall race at Richmond last season. The win clinched a playoff berth for Virginia Native who was just 14th in the standings prior to Sunday. 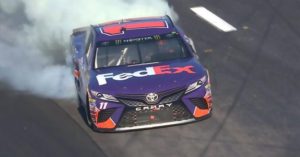 With 40 laps to go in the Overton’s 301, Ryan Newman spun out which brought out the caution flag. Then leader, Matt Kenseth, was the only driver to take two tires when everybody came down pit road. Hamlin’s pit crew was able to get the 11 car off pit road in fourth place. After a bad restart by Dale Earnhardt Jr., and not enough grip from Kenseth, Hamlin was able to take the lead half a lap into the final run.

Hamlin had a big task on his hands with under 10 laps to go. Kyle Larson, who at one point was behind the leader by almost three seconds, had cut the lead to under a second. With lapped traffic in the way, Hamlin was able to navigate through better than Larson to pull off the victory. The second place finish is Larson’s seventh of 2017.

Toyota dominated most of the day. Current Points leader, Martin Truex Jr., was able to lead 137 of the 301 laps at New Hampshire Motor Speedway. Couple that with the 153 laps led by Hamlin, Kenseth, and Kyle Busch combined, and the Toyota Racing Team led 96.3% of the race.

This win for Hamlin is not only big for him, but for Joe Gibbs Racing as well. JGR had yet to win a race in 2017, their longest drought since 1999. The famed racing organization was able to sneak two more drivers in the Top-10 as Kenseth finished fourth and Daniel Suarez finished sixth.