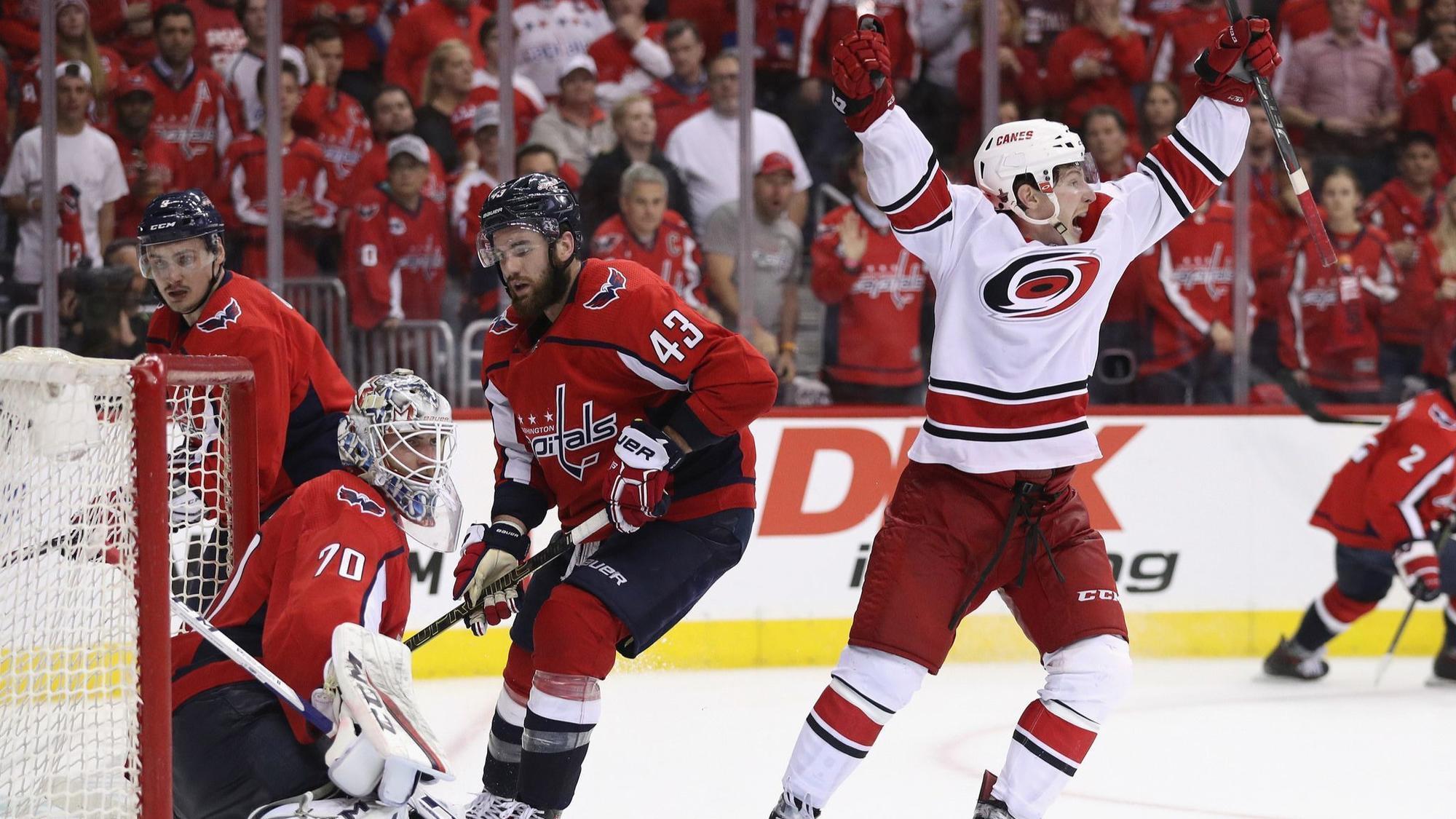 For the past few years, disappointment and collapse defined the Capitals’ postseason performances; that is until last year.

Entering the 12th game seven of the Ovechkin/Backstrom era, the energy around and inside of Capital One Arena on Wednesday was one of anxious excitement.

Despite the team being 4-7 in such games during that span, the feeling was different this year, thanks in part to the success of last postseason; which included a game seven shutout win in Tampa Bay in the Eastern Conference Finals.

Finally 7:40pm rolled around and the puck was dropped. The home team came out of the gates seizing the moment and feeding off of the crowd who was loud, but with a sense of nervous energy in them. Andre Burakovsky kicked all that nervousness out the door just 2:13 into the game with an unassisted goal to give Washington the lead.

Four minutes later Alex Ovechkin put on a show, undressing a couple of Canes defenders on his way to dishing out his fifth assist of the series on a Tom Wilson goal that made the score 2-0 just 6:23 into the game. At this point the crowd is deafening and the Carolina Hurricanes are in deep water.

The score remained the same heading into the Caps’ second power play of the night; the ultimate turning point in the game, series, and season for both teams.

Throughout the series, the Capitals’ power play unit was lethal at home. They were already 0 for 1 on the night and they never got it in order the second time around…in fact it was so bad that Hurricanes star Sebastian Aho got a shorthanded steal and score to put his team on the board just nine seconds before the halfway mark of game seven (at least the regulation portion). From there Carolina only trailed by one goal and their belief was restored.

Can you guess what else was restored? That nervousness in the building. The Capitals had chance, after chance, after chance to score a third goal before this moment; a goal that even Canes first-year coach Rod Brind’Amour admitted post-game would’ve essentially ended Carolina’s hopes. Washington had a foot on their necks and not only did they not make the finishing stomp, they allowed the opposition to sit up and believe.

From the 9:51 mark of the second period (Aho’s SH Goal), until the very end, Carolina controlled the puck and physicality in the game and it truly seemed like only a matter of time before it was a tie game.

Evgeny Kuznetsov scored his first goal of the playoffs at 13:22 of the second to make it 3-1 Caps, despite the ongoing pressure from the away team. That nervousness got up out its seat and made it’s way back to the exit doors….it never got a chance to fully escape before Teuvo Teravainen got one back for the Hurricanes three minutes later.

Before the last 20 minutes of regulation began, the defending champs maintained a one goal lead, but first-year coach in his own right, Todd Reirden had the biggest intermission of his career ahead of him.

There was a strong sense in the building that a tying goal was inevitable because of the way Carolina began to control everything on the ice; Reirden needed to make adjustments and wake his team back up….he made no adjustments, his team did not wake back up.

Jordan Stall did the deed just 2:56 into the third and although both sides had a chance to end the game in regulation, it became time for the most exciting/nervous period in all of sports……game seven overtime hockey.

Around the press box, the majority of reporters were rooting for the team we cover on a daily basis; as for the nervousness, you would’ve thought we were in the stands.

Eventually, the Capitals lost in double overtime via a Brian McGinn tip-in past Braden Holtby; who played an OUTSTANDING game, at the 11:15 mark.

So the question now is who gets the blame because, someone has to get the blame right?

Re-enter Todd Reirden…to start the first overtime period, Jakub Vrana was dropped from the second line to the fourth in exchange for Chandler Stephenson. A switch that had a lot wondering why? (Vrana and Stephenson re-swapped roles in the second overtime).

That fourth line played a grand total of two shifts in the first OT period, which is normal in situations like this; except for the fact that the top guys, Ovechkin, Backstrom, and Wilson were dog tired at this point and Reirden continued to trot that line back onto the ice shift, after shift, after shift.

Yes you want your best players on the ice during this time, but it became hard to not actually feel bad for these guys looking at the exhaustion on their faces. Especially considering there were relatively fresh legs on the bench who could have provided a couple of relief minutes. Just the night before the San Jose Sharks’ game-winning game seven OT goal came from a guy who was only in his second shift of the period.

Who are these fresh legs? I’m glad you asked!!! Nic Dowd and Devante Smith-Pelly. This is the same Nic Dowd that just signed a three-year contract extension two weeks ago, and the same Devante Smith-Pelly that was called up from Hershey for his energy and physicality less than a week ago.

It had been shown and verbalized how important these guys were to the team throughout the series and yet both played less than nine minutes of a game that went just short of four hours long. Smith-Pelly is an unrestricted free agent this summer and turned down money to stay in DC last year; it’s extremely hard to imagine he does the same this time around after last night.

Back to Reirden, because we aren’t done yet. The refs decided they were not going to be a factor in the result of this game, there was 49:29 of game time between penalties called in the second period and second overtime. It almost became a game of street hockey in which anything was fair. Brind’Amour’s group noticed, adjusted, and played accordingly; Reirden’s group did not.

The time-on-ice distribution and game physicality led to exhaustion of the Capitals’ best players and despite hope, it was clear early into the first OT period that it was a matter of when, not if, Carolina scored the series ending goal.

Of course you have to put the lack of execution and ability to essentially end the series in the first two periods on the players; but for Reirden to either not notice the ice completely tilt, or notice and not act accordingly is what cost the Capitals their chance to go back to back.

For the majority of the season, I spent time defending the first-year Capitals coach as he took a lot of criticism that he didn’t deserve. He is a very good NHL head coach and is the right coach for this team. Last night was a rookie coach folding under the pressure of his first game seven and that is okay and understandable; but just as I defended him when it was necessary, the negative must be placed on his shoulders when applicable.

In the past, last night’s loss would’ve come with an emotion of anger and frustration. Instead, fans left the arena last night simply sad and disappointed. F Street was the quietest I’ve ever heard after a game, win or loss.

A lot of that feeling came from the fact that everything was lined up for the Caps to repeat this year. Tampa Bay and Pittsburgh were swept out of the first round and Toronto lost the night before in their own game seven. All the teams Washington would normally have to play against in the postseason were already gone and the path to repeat was as open as ever.

It’s fair to say a huge opportunity was lost along with the game and series Wednesday night, but until the next time, no one will ever forget the ride the 2018 Stanley Cup Champions just took everyone on.