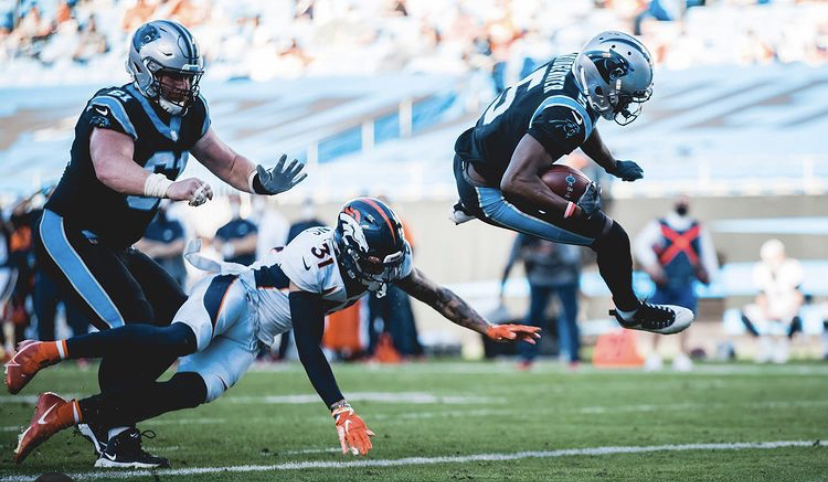 Both teams limped into Sunday’s game having overcome, in a sense, their own Covid-19 outbreaks in recent weeks.  On paper, the teams looked pretty even.  Both were looking for their fifth win and rank in the bottom half of the league in most statistical categories.  The Panthers were without receiver DJ Moore and defensive tackle Zach Kerr as both players remain on the reserve/Covid list.

The Bronco struck first as D. Spencer broke loose and returned a punt 83 yards for a touchdown after the Panthers went 3-and-out on their first offensive possession.  The only Carolina score of the first half came courtesy of a great defensive play by rookie Jeremy Chinn in the second quarter.  Chinn got the strip sack on Drew Lock and defensive end Efe Obada scooped the ball and returned it all the way to the Broncos’ 3-yard line.  Running back Mike Davis punched it in two plays later and the Panthers took a 7-6 lead.

After stopping Denver running back Melvin Gordon for no gain on the 4-yard line, Panthers linebacker Jermaine Carter was flagged for taunting.  The penalty gave the Broncos a fresh set of downs and placed the ball at the 2 yard line.  Lock found Nick Vannett in the end zone for the touchdown on the ensuing play.  As the Panthers moved toward field goal range, quarterback Teddy Bridgewater was sacked for a loss of 16 yards and the Panthers went into halftime down 13-7.

The third quarter has not boded well for the Panthers much of this season, and today they could only muster a field goal while the Broncos scored two touchdowns.  The first touchdown of the second half saw KJ Hamler burn Rasul Douglas for 37 yards and kicker Brandon McManus missed his second extra point of the day.  The second Denver touchdown was a short left pass to Tim Patrick.  After making the extra point, the Broncos accepted the offsides penalty against Carolina and tried for the two point conversion – which failed.

The Panthers came alive in the fourth quarter but it was too little too late.  After a Bridgewater touchdown on the keeper, Joey Slye made a 26-yard field goal to bring the Panthers within 5 points with a little more than five minutes left in the game.  Any momentum was quickly squashed as Hamler got behind Douglas once again; this time for a 49-yard touchdown that put Denver up 32-20 with 3:54 left to play.  The Panthers quickly responded, scoring in 28 seconds.  Bridgewater connected with Pharoh Cooper on a 32 yard pass play that set up a second rushing touchdown for Mike Davis.

Despite the struggles of the afternoon, the Panthers still found themselves within striking distance thanks to a well-placed Slye punt and a solid defensive series.  However, like many Panthers games, the team couldn’t get it done with the game on the line.  The final series saw Bridgewater take a sack and the Panthers turn the ball over on downs as Bridgewater found Curtis Samuel, who was well shy of the line to gain.  Lock kneeled to end the game and the Broncos left Charlotte with their fifth win of the season.  Lock had his best game of the season, finishing with 280 yards, 4 touchdowns, and a QBR of 149.5.  Bridgewater finished with 283 yards and no touchdowns.  The Panthers fall to 4-9 and will visit Green Bay in Week 15.