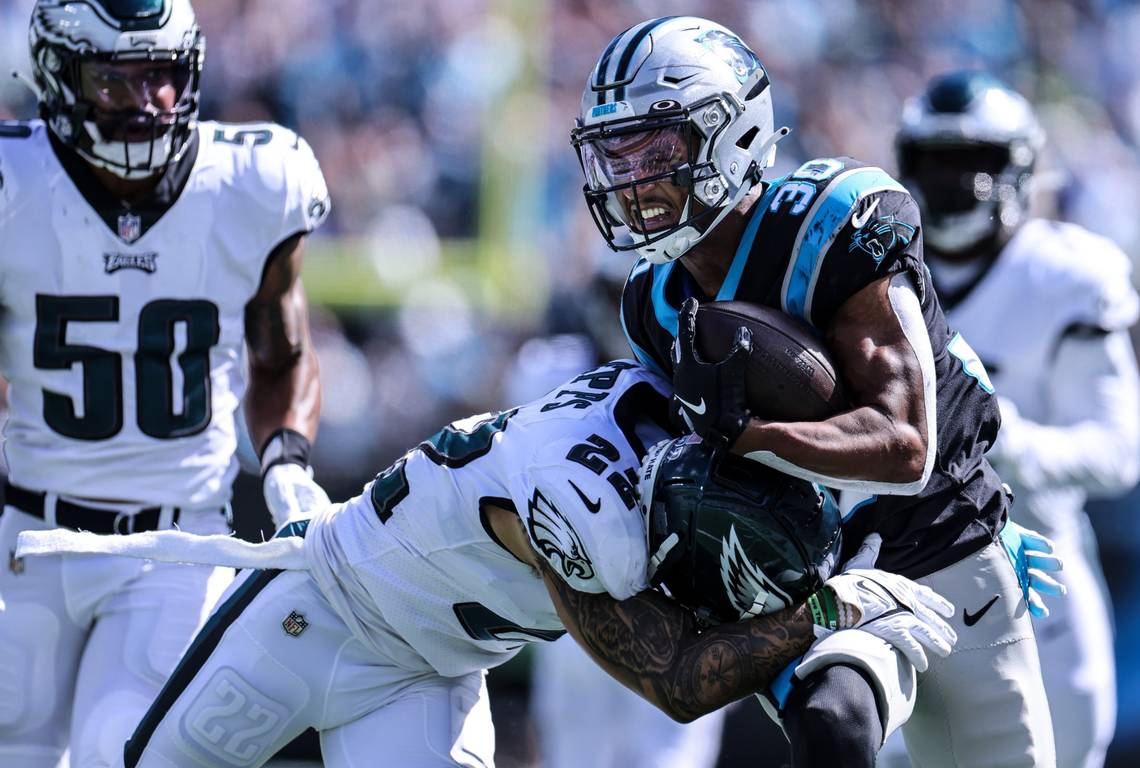 Fresh off their first loss of the season, the Carolina Panthers looked to get back into the win column but a familiar foe appeared as they hosted the Philadelphia Eagles on Sunday – the third quarter.  After an implosion in last week’s loss to the Dallas Cowboys, the Panthers struggled out of halftime once again.  For a team that preaches complimentary football, what was on display at Bank of America was anything but that.  The defense shook off last week’s performance and set the tone early forcing the Eagles into punts on their first two possessions.  The Panthers cracked the scoreboard first with a 48-yard field goal by Zane Gonzalez on their first drive.  Their second offensive drive was halted when Darius Slay intercepted Sam Darnold at the Panthers 25-yard line and returned it the 10 to set up first-and-goal for the Eagles.

The Panthers defense responded, and the Eagles settled for a 30-yard field goal after gaining -2 net yards on the drive to tie the game.  On the next drive of the game, Darnold connects with tight end Tommy Tremble for the only touchdown of the half.  The rest of the half would consist of missed opportunities – a phrase the Panther faithful know all too well.  An unnecessary roughness penalty called against Alex Singleton for a late hit on DJ Moore placed the ball at the Eagles 18 yard line, but the Panthers could get no closer.  After Darnold was sacked on third down, the Panthers settled for another field goal – this time a 43 yarder. A bad snap that sent Hurts scrambling into the end zone resulted in a safety and Carolina’s last points of the half.  With the defense settled into “prevent”, the Eagles marched downfield and ended the half with a 58 yard field goal to make it 15-6 in favor of the Panthers at the half.

Then came the third quarter – a nemesis that has haunted the Panthers for the past two seasons.  Defense made play after play but the offense just could not put points on the board.  There were back to back stellar plays by cornerback Donte Jackson.  Jackson forced Devonte Smith to fumble; Jeremy Chinn recovered and returned the ball to the 49.  The Panthers could not capitalize and the drive ended with Darnold being sacked for the third time.  On the Eagles’ ensuing drive, Jackson came up big again- picking off a pass intended for Zach Ertz.  The Panthers not only came away empty-handed, Darnold was intercepted by Slay for the second time.  Back to back sacks by Haason Reddick kept the Eagles from putting points on the board following the turnover.

The offense’s inability to produce points allowed the Eagles to stick around and soon the dam broke.  A 53-yard reception by Quez Watkins set up a 1-yard touchdown by Hurts and the Eagles cut the lead to 2 points.  The Panthers only second half points came on a 50-yard field goal by Gonzalez with 8:29 left to play in the fourth quarter.  After forcing a turnover on downs, the Panthers had another lackluster offensive drive, culminating in a blocked punt to set up the final Philadelphia touchdown.  The Eagles recovered the ball at the Panthers’ 27-yard line and capped the drive with a walk-in touchdown by Hurts which gave Philadelphia their first lead of the day.  A successful two-point conversion made it a 3-point game, in favor of the Eagles, with 2:38 left to play.

The Panthers’ last chance was thwarted when Darnold threw his last interception of the day; this time to Steven Nelson.  After a couple of first downs and with the game firmly in hand, Hurts kneeled to end the game and give Carolina their second straight loss.  Hurts finished 22-of-37 for 198 yards, two rushing touchdowns, and one interception for a passer rating of 62.7.  Darnold finished 21-of-37 for 177 yards, three interceptions, one touchdown, and a passer rating of 44.7.  Devonta Smith led all receivers with 77 yards on seven receptions while DJ Moore had 42 yards on five receptions for the Panthers.  Chuba Hubbard, starting for the injured Christian McCaffrey was the game’s leading rusher with 101 yards on 24 carries.  Carolina drops to 3-2 and hosts the Minnesota Vikings in Week 6.