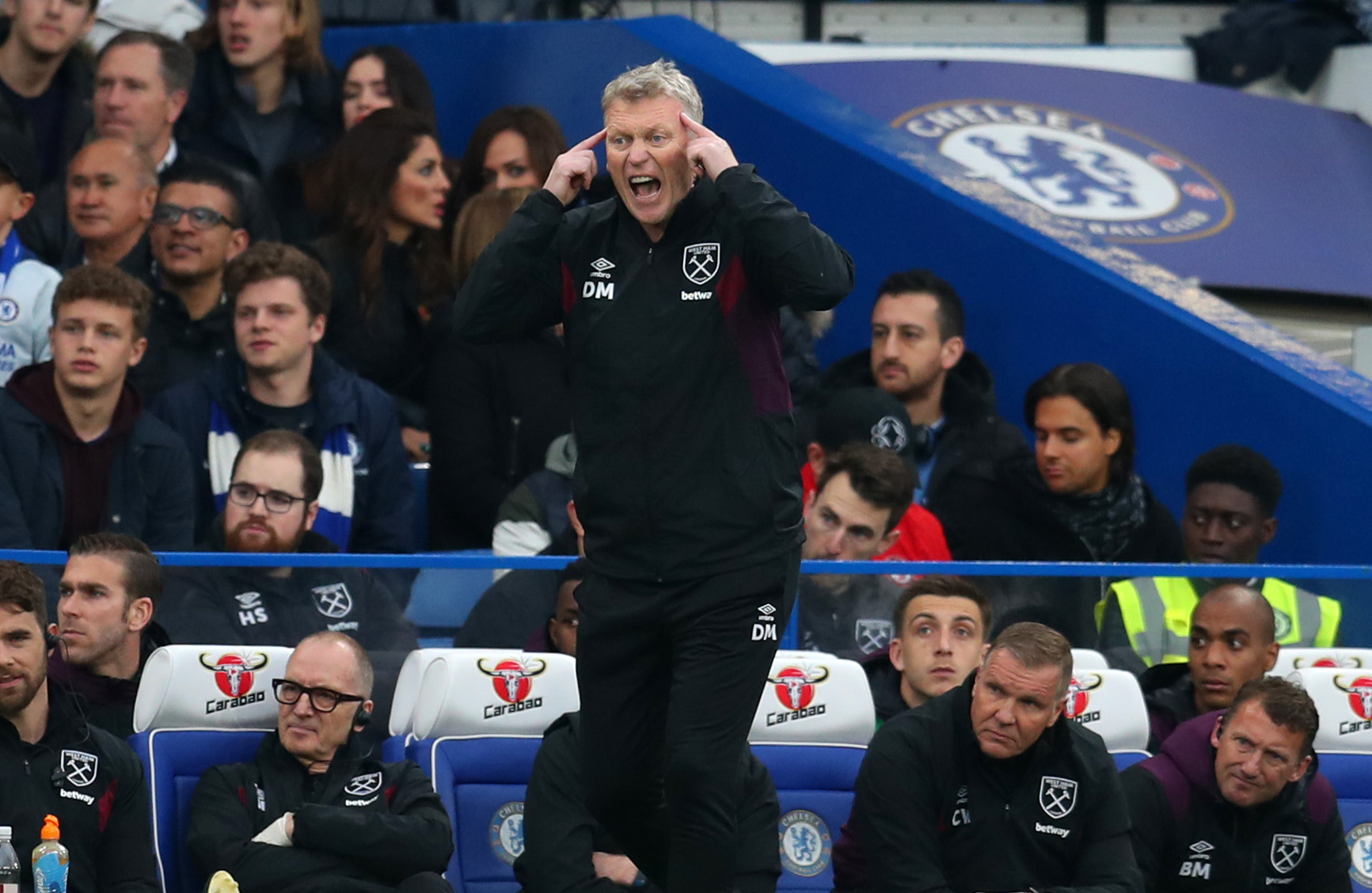 Upon arrival at the London Stadium in November 2017, David Moyes bequeathed a marginally fractured West Ham United team very low on endeavor, self-confidence and respective standing in the English Premier League in 2017-2018.

Two season’s prior to Moyes appointment as West Ham United boss, Slaven Bilic’s tenure at West Ham witnessed the Hammers seal a positive seventh place finish in the English Premier League in the 2015-2016 season, which was of course West Ham farewell season at Upton Park before moving to the London Stadium.

New life for the Hammers at the London Stadium in Stratford, London borough of Newham in the 2016-2017 season brought a wealth of complications in becoming acquainted to the 60,000 capacity London Stadium, which has been a recurring talking point and argument for Hammers fans since leaving Upton Park. The then ongoing saga of Dimitri Payet also created disharmony and distractions throughout the 2016-2017 season, whereas a true replacement for the French playmaker was never purchased, excluding the failed panic buy of Scotland playmaker Robert Snodgrass from Hull City.

This season, however, saw Bilic fired as West Ham boss thereafter a dismal start in the English Premier League. The positive legacy of the otherwise much appreciated Slaven Bilic era at West Ham United is often summed up by West Ham United’s English Premier League 2015-2016 season, which is the Irons highest finish in the EPL this decade. Since last season, the ongoing negativity and problems at the London Stadium started to further mount for the Hammers until Bilic was relieved of his duties as manager.

Moyes unlikely appointment at West Ham this season was initially met with pessimism and uncertainty given the Scotsman’s three previously unsuccessful and brief managerial stints with Real Sociedad, Sunderland and Manchester United. Sir Alex Ferguson selected David Moyes as his replacement after Ferguson’s retirement at the end of Manchester United’s 2012-2013 title winning season.

Moyes has extinguished some of the negativity, which was prevalent although is still fighting a battle for acceptance from Hammers fans, who in essence have not embraced and fully got behind Moyes since his arrival at West Ham United.

In terms of performance overall in 2017-2018, Moyes inherited a mess and has since slowly improved West Ham’s overall fitness levels and distance covered as a team, whilst assertively being fearless in dropping some players, either to the bench or exiled until sold, who are performing below expectations.

During the current Moyes era at the London Stadium, West Ham United’s overall transfer policy has also raised a series of very poignant questions, notably during the January 2018 transfer window, which saw Moyes sign former Manchester United and Juventus defender Patrice Evra until the end of the season, and 25-year-old striker Jordan Hugill from SKY BET Championship club Preston North End in an estimated £10 million deal. Undeniably, Hugill is very much unproven and below standards for a striker at English Premier League level, whereas veteran Evra is past his prime.

Furthermore, Moyes also signed Portugal midfielder Joáo Mário on loan from Serie A club Internazionale. Mário has been perhaps one of the most astute signings in the Moyes era at West Ham United as the dynamic Portuguese midfielder’s performances have in turn led to talks of the Hammers potentially signing the Portgual star permanently once the loan deal ends at the end of this season.

Moreover, Moyes’ professional relationship with the West Ham United upper echelon of David Sullivan, David Gold and Karren Brady on the surface seems very amicable, although with Moyes’ current six-month contract expiring next month, Moyes’ overall performance since his arrival has no doubt been vigilantly monitored. The West Ham United board provided Moyes with such limited and unreasonable transfer resources for an EPL club during the January 2018 transfer window for one the following four reasons.

The first reason being a test of Moyes’ character as a manager in not overhauling the squad in his image with his own desired financial demands, whereas the second reason being that the attentive West Ham United board would prefer to use such transfers funds this coming summer after what has been an already uncertain season, which could still see the Hammers relegated to the SKY BET Championship; West Ham United’s final five English Premier League 2017-2018 fixtures are against clubs currently in the top ten of the English Premier League.

For a club of West Ham United’s stature and a well-storied club who now play at home at the London Stadium, the legacy and stadium used at the very memorable London 2012 Olympics, there appears to be a certain Napolean complex and resistance amongst the Hammers board to show greater ambition to invest in the current squad with further quality. With the London Stadium now home, West Ham United were thought to attract some of the top talents from around the world, although it has been quite so-so in contrast in respect of acquisitions. There is a power struggle between the board, ownership and manager at the club which is clearly hurting the Hammers performance on the field and within the fanbase.

The third reason for the board providing Moyes with such limited funds during the January 2018 transfer window could perhaps be the most logical. Moyes’ current six month deal with West Ham United expires at the end of this season.

Therefore, depending on if the Hammers remain in the EPL, West Ham could either renegotiate with Moyes to reward him with a brand new revised contract based on West Ham United’s potential survival in the English Premier League in 2017-2018, notably with a multi-year deal.

The fourth reason is West Ham United’s board and ownership have already potentially made up their minds and a valid shortlist of long-term candidates for the West Ham United managerial job next season has been already created months ago, thus budgeting on transfers with Moyes given his current six month contract.

However, if Moyes was hypothetically given a free will to spend back in January and failed, the expectations would have been even higher, hence opting for options more short-term and financially affordable until a decision has been made this summer on his own future.

For better or worse, this philosophy from the West Ham United board and ownership could be viable as the club longs to take steps forward into the future. Results will ultimately determine David Moyes future at West Ham United, but West Ham United’s board, ownership and executives will need to show accountability with excellent decision making if the Hammers want finer progression and performance next season, whether it be in the English Premier League or in the SKY BET Championship.

In all fairness, Moyes has shown feistiness and a competitive spirit which has been evident with intense training sessions and a slightly improved desire during games for the Hammers. Moyes’ presence has seen West Ham United’s Austrian forward, Marko Arnautovic, become a pivotal figure for the club’s battle for survival. Arnautovic has been involved in 13 important goals for West Ham United in the 2017-2018 season, whilst being one of the positive influences for the Hammers.

The former Manchester United and Everton manager has in effect slowly ushered the Hammers away from an underlying issue which had continued to fester during the latter stages of the Bilic era. Moyes has both his loyal supporters and ardent detractors, both in the mainstream media and within the West Ham United fanbase. At present, Moyes now has a big point to prove until the end of the current English Premier League season, irrespective of his track record with Everton, to effectively become a savior when the Hammers need it most.

With regards to overall expectations, staying in the English Premier League this season will be considered a success in the eyes of the West Ham United faithful. However, it remains to be seen if the Hammers board feel the same way at the end of the season, whether it’s courtesy of Moyes tactical style or mixed results simultaneously. Conversely, a strong portion of Hammers fans have been very vocal and critical of West Ham United’s board and ownership, which was apparent during a pitch invasion and protest during West Ham United’s 3-0 loss to Burnley in March 2018.

The level of communication between the West Ham United board and David Moyes is paramount for success until now until the end of this season, whereas both Moyes and the Hammers board will have to provide transparency and assurances to West Ham United fans, both currently and with regards to the future.