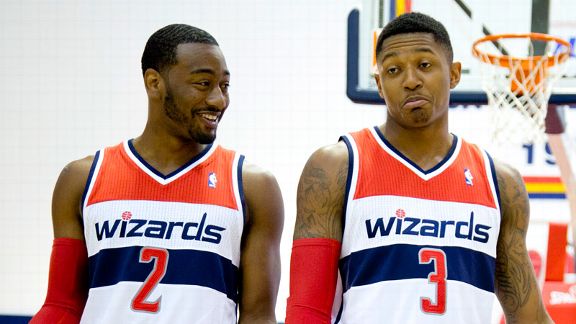 Sometimes in life, you have to deal with the cards you are dealt. In the case of the Washington Wizards, they have to deal with the cards they have dealt themselves. Coming off an overtime victory versus the Sacramento Kings last night. The Wizards are now 6-10 on the season and 11th in the Eastern Conference. Their next assignments, the unguardable Russell Westbrook, a dominant San Antonio Spurs team, and Brooklyn Nets team who are, well the Brooklyn Nets. Almost a quarter of the season is gone and the Wizards must find their identity or this season may be over with before winter settles in.

All we heard so far this season from head coach Scott Brooks to the leaders on this team such as John Wall and Bradley Beal is “It’s still early in the season.” In theory that is true, however, by now this team identity is starting to settle in. The Wizards are who they are, flaws included. They have a high scoring backcourt in Beal and Wall. In the last five games, Beal has averaged roughly 29.2 points while Wall chimed in with an averaged of 23.6 points.  At the same time, the woes of the Wizards have been and continue to be the second unit. Even in the overtime victory, the bench of the Wizards was still outscored by the Kings. Brooks has tried just about everything with switches in the rotation, but nothing seems to work. The moment he sits is starters down either the Wizards lose the lead, or his team is on the verge of giving up another 30 point quarter which seems to be the norm. With the facts being what they are, it makes you wonder how will this team win any of these games on the road.

Breaking Down the road trip:

The first stop will be in Oklahoma City. The Thunder are coming off a victory in New York vs the Knicks. Where fans in the Garden saw a shootout between Westbrook and Derrick Rose. Rose 30 points weren’t enough to put away this pesky Thunder team. Westbrook, as expected, had a triple double which includes his 27pts. The Wizards have a lot in common with the Knicks when it comes to their second unit at least. Both teams benches are offensively deficient. Brooks must watch some film and come up with a way to keep his team in this game or it could get ugly before it starts. Many people mention the field goal attempts by Westbrook, but sometimes forget to recognize the number of assists he has as well. Guarding the 3 point line will be a challenge for this Wizards team and that is where the Thunder can make them pay dearly.

Secondly, the Wizards will travel deep into Texas and play the San Antonio Spurs. They’ve already seen this team less than a week ago. Wall and Beal had a decent night offensively and unfortunately the second unit was outscored by double digits. The Wizards are outmatched in every situation when playing San Antonio so the hardest part for them would be just showing up to the game.

Lastly, the Wizards will play a struggling Brooklyn Nets team. One would think, they would win that game handily. However, considering this is the same team that was down by as many as 25 points to the 76ers about two weeks ago. There are no guarantees with this team. It is worth nothing this game will come after an extended stay in the South-Central United States and will be the beginning of a back to back for the Wizards.

The Wizards goal should be going 2-1 on this road trip. Facing opponents like the Thunder and Spurs will help this team realize who they are and will help them get better as a unit. Time is of the essence and honestly, the Wizards can not continue to lose. A good six or seven-game winning streak could turn this team around. They are who they are, yet the same way they got themselves in this hole will be the same way they can get themselves out of it. Defending against the 3 point shot and perhaps 3 of the bench players can be consist and average at least 10-12 points then this team can be on to something. Until then, they will win here and there and continue traveling down this long road of meritocracy.