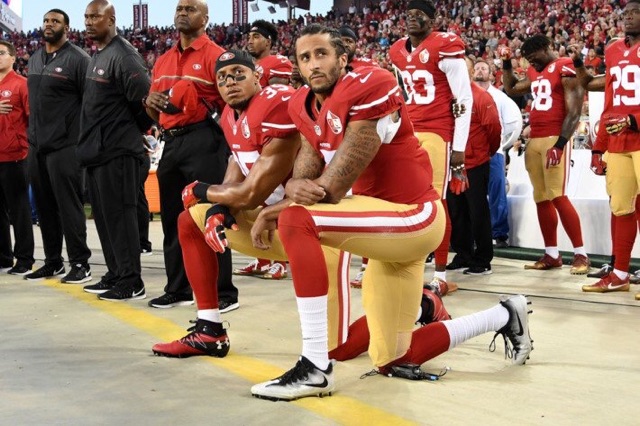 I remember being able to turn the television on to any of the several different sports channels after I got home from a long day at work. I would hear nothing but sports scores and updates from previous games that I had missed and inspiring stories of players that filled me with happiness and sadness all at once. I now turn the television on to those same sports channels and I see politics. I see race wars. I see the Commander-in-Chief curse out professional athletes on national TV. I turn my television off.

On August 26th 2016, the San Francisco 49ers were hosting the Green Bay Packers in a Preseason game at Levi Stadium. As before every kickoff, the words of the National Anthem began. Every person in the stadium was on their feet. All but one person. 49ers Quarterback Colin Kaepernick was seen sitting on the team’s bench while the anthem played. He as well as many of his teammates and coaches thought that the world had not noticed however, not only did they notice, they responded, negatively and positively. This peaceful protest would be the start to a chain of events that the NFL and the world could not have predicted.

After that August game, Kaepernick was asked why he was not standing with the rest of the players during the National Anthem and he responded:

“It’s to bring awareness and make people realize what’s really going on in this country. There’s a lot of things that are going on unjust that people aren’t being held accountable for and that’s something that needs to change. This country stands for freedom, liberty and justice for all and it’s not happening for all right now”

The actions and words from American citizens towards Kaepernick were cruel, harsh and heartbreaking. Many white Americans used racial slurs when referring to Kaepernick. But Kaepernick was not deterred. As the season progressed and time passed Kaepernick continued to use the NFL as a platform to voice his opinion and beliefs by kneeling during the anthem of every game of the 2016 season. In 2017 he opted out of his contract to become a free agent which he still remains today. Many people, including myself, believe he is a free agent not because he is lacking the talent but because regardless of his incredible talent, his protest has negatively set him apart.

It seems like it has been way longer than a year since Kaepernick first protested during the National Anthem and that is because so much has happened since then. As a result of the mass amounts of unjust acts and police brutality on specifically people of color in the last year, other NFL players have begun to use the football field as a platform to speak out as well. In response, on September 22, 2017, the President of the United States, Donald Trump, made a speech that didn’t sit well with a lot of the American People, myself included.

Trump said the following in a speech in Huntsville Alabama:

“Wouldn’t you love to see one of these NFL Owners, when somebody disrespects our flag, to say get that son of a bitch off the field right now, out he’s fired. HE’S Fired.”

Athletes throughout the NFL and NBA, Including LeBron James, Richard Sherman, Steph Curry and John Wall voiced their opinions on the comments Donald Trump made. But what stuck out to me most were the actions of all NFL teams in week 3 of the NFL season. Every team showed some type of protest or unity statement to emphasize that no matter how much the President of the United States tries to divide us, it will not happen.

I will never know what it is like being black in America but I can imagine feeling this: Imagine raising your right hand to take an oath of office to support and defend the constitution of the United States against all enemies foreign and domestic. To put your life on the line for that cause, only find out that this was simply not the case. To find out that at the end of the day you were still a person fighting for equality in the land of the free. To find out that our President of the United States feels that practicing your first amendment right as a black citizen, makes you a “Son of a Bitch.” Yet, that same president can not only find reason in protecting this right but also condones it when the protestors are Neo Nazi’s.

This is something that has particularly bothered me through all of this. Trump said nothing for days about the white Americans that carried Nazi flags and spat racial slurs and hate except to remind us that there were good people involved. Days later when he tried to revoke his statements, he failed to mention that they were “Sons of bitches” or that they should be fired. Donald Trump’s actions and words towards the KKK, White Supremacists and Neo Nazi’s compared to Peaceful protesters, especially those of color, have been drastically opposing.

I would never have thought I would see a President of the United States try to divide the American people. Yet, the actions of Donald Trump over the last year have shown just what his intentions for our country are.

Based off of social media, the news, and America’s overwhelming response to the NFL, it would seem like 90% of white Americans are ignorant to the inequalities of our country. As I look around and I see people of color that I love, fear and sadness instantly strike me. The fear of not knowing if they will be a victim of another unjustified killing or not. The sadness of them not being respected and treated equal because of their skin color. It literally breaks my heart.

Don’t get me wrong, I respect law enforcement. I have a father who has been a police officer since he was 21 years old. He’s the greatest man that I know. The way that he upholds the law is the most respectful way. The way that he respects and treats people equal no matter the sex or race, gives me hope for our Police Force. I know plenty of Police Officers that are great men and uphold the law in an equal and peaceful manner. It’s a true statement when they say there are more good than bad.

Unfortunately, there are bad apples in law enforcement and in a job with that power, there is no room for bad apples, especially when innocent people are getting murdered, particularly people of color. Despite my respect for Police, I will show no fear calling out an unjustified killing. Right is right and wrong is wrong. However, it seems as though I am a minority in feeling this way because a majority of white America is choosing to place blame and find excuses instead of admitting that we have an inherently racist justice system.

It’s highly disappointing walking by a television screen or logging onto social media and seeing the words “Players Protest Anthem”. False information being spat out to the public for ratings. From when the kneeling during the national anthem first took place to now, athletes have all uttered the same exact words throughout: “We are not protesting the anthem or military. We are using our platform to bring awareness to social injustice.”

For the longest time I always felt like I didn’t have a voice, that my words and or actions wouldn’t make a difference in the world especially dealing with social injustice. What in the hell could a 24 year old white kid from Richmond, Virginia say that would change the world and make things better? It was at that moment that I realized I was a part of the problem. Not in the sense of being racist or devaluing people of color, but the fact that I sat back and didn’t say anything. The fact that I knew what was right and wrong. The fact that I felt the way that I did but never uttered the words for the simple fact of thinking they wouldn’t change anything. I was wrong.

So, as I stand here today I want it to be known that I am behind Colin Kaepernick. I support Jemele Hill. I stand with Malcolm Jenkins. And also keep the spirits of Dr. Martin Luther King Jr, Rosa Parks, Muhammad Ali and Jackie Robinson in my heart forever. I will advocate with every race and sex as we still continue to fight for equality, unity, and social justice.

I wrote this article because I want you to stop being a part of the problem as well. I want people to know that no matter whether your platform is your wall on Facebook or an NFL football team, no matter how big or small your platform is, your words, thoughts and voice matter. Whether your stage is as big as Colin Kaepernick’s or as small as a kid from Virginia, you can make a difference and create change in not only America but the world.