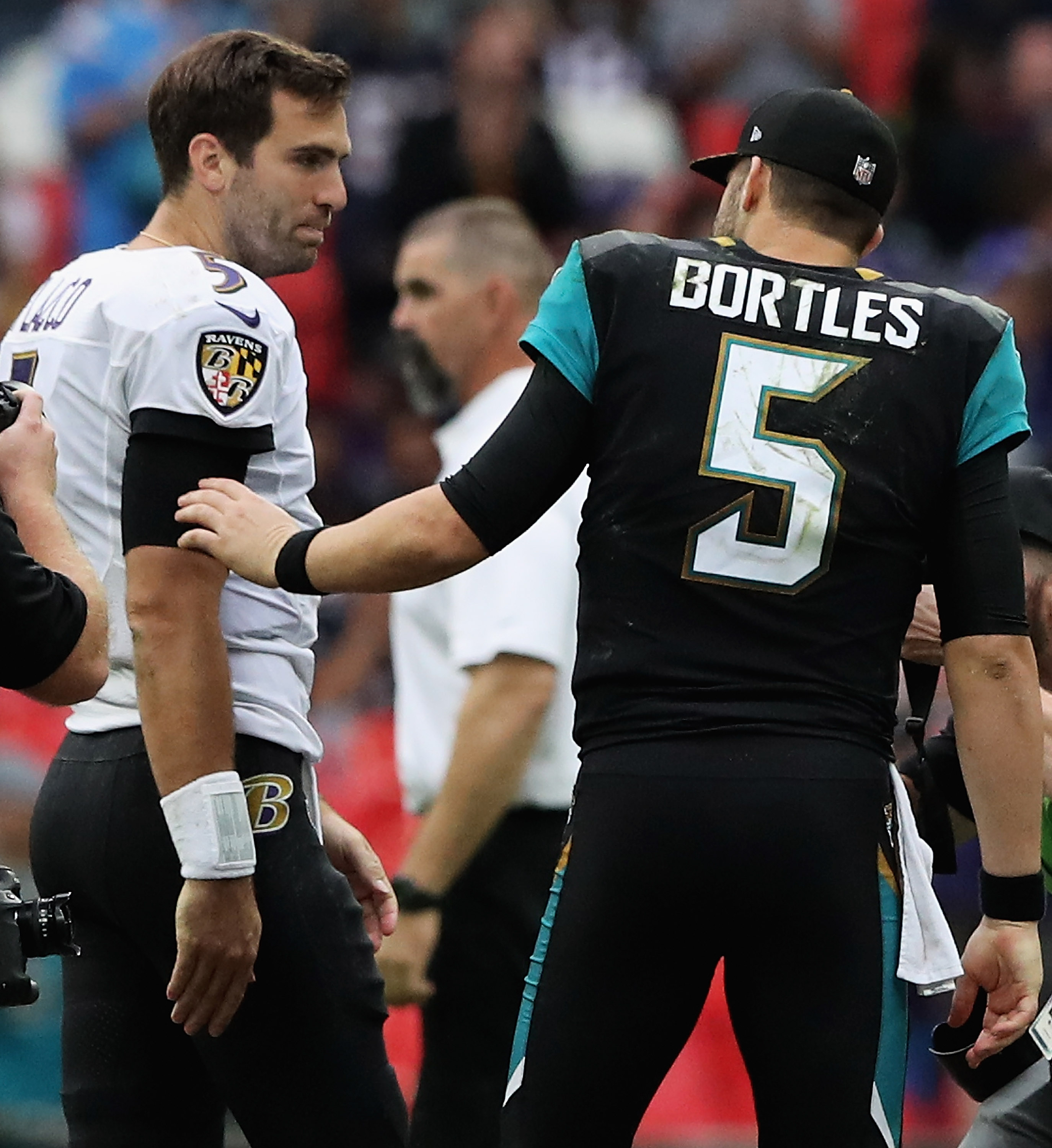 The Baltimore Ravens were beaten 44-7 against the Jacksonville Jaguars on Sunday, in large part because of their woes on the offensive side of the football.

OWINGS MILLS — Baltimore had trouble getting the ball up and down the field against a stout Jacksonville defense. However, this has been emblematic of the issues at hand for Baltimore. Their passing offense is ranked 32nd in the league and their total offense sits at 23rd.

Despite those numbers, Ravens quarterback Joe Flacco came to he and his teammate’s defense:

“I think we’re getting ahead of ourselves when, all of a sudden, we say we haven’t played well for three weeks,” Flacco said, via the team’s official website. “We played terribly last week; there’s no way around that. But the other two weeks, we did what we had to do to win and I don’t think that’s anything we can hang our heads over.”

It is no stretch of the imagination to say that the offense has been bad, but much of that comes from how poorly Flacco has played. The 10-year veteran from the University of Delaware has had the worst start of his NFL career yet, passing for just 366 yards, three touchdowns and four interceptions in three games. Stats like those would cause for many quarterbacks to be benched, but Flacco seems to still be confident in his offense.

“We did what we had to do to win,” Flacco said. “All of a sudden when you lose one and didn’t play well, you act like you haven’t played well at all and it’s not true.

To be fair, Flacco didn’t play poorly during the game against the Cleveland Browns. He went 25-for-34 passing, completing 73.53% of his passes for 217 yards, two touchdowns, one interception and a passer rating of 97.3. Many point to the game against the Cincinnati Bengals, which only saw him pass the ball 17 times for 121 yards, one touchdown and an interception and a passer rating of 71. The difference was that Baltimore won both games.

“Statistically it wasn’t the best performance,” Flacco said of the first two weeks, “but we did what we needed to do to win the football game, and that’s what this is all about.”

Flacco’s injured back seems to have caused a massive dip in his workload. Since coming into the league through the first three games of each season, Flacco’s lowest attempts in passing came during his rookie year (48). Now Flacco sits at his lowest total since 2008, passing the ball just 69 times. He has completed 60.9 percent of passes that he’s thrown (27th in the NFL), has just thrown for 5.3 yards per attempt (last), 122.0 yards per game (last) and a 65.2 passer rating (31st). These type of numbers point to Flacco, but other players as well and it adds up.

“It’s never as good as you think or as bad as you think. Having said that, when one or two guys do something wrong every single play, it isn’t the biggest thing that went wrong, but they add up,” Flacco said. “If we make a first down on those first two drives, the game could be completely different.”

“We could go down and score a touchdown or kick a field goal, and the whole game is different from that point on. There’s a butterfly effect to everything. You don’t get a first down and it just grows. That’s what you see when you go back and look at the film. It wasn’t anything major, but little things, each guy taking their turn doing their little thing that wasn’t correct, then you’ve got a blowout.”

Would others on the team agree with him?

“We definitely have a lot of work to do. It hasn’t been good enough offensively,” Ravens tight end Benjamin Watson said on Wednesday. “I think everyone on offense would say they want it to be better.”

The veteran tight end believes that through film, players can see exactly where their mistakes were made.

“Watching the film, there’s usually one guy here or there. We’re not that far off,” Watson said.

“Watch the tape in detail, those guys are playing pretty good. You would be pretty happy with the way those two right guards played. You would probably be a bit surprised,” Harbaugh said.

Baltimore’s biggest test of the season comes against the Pittsburgh Steelers (2-1), their division opponent and arch-rival. The Steelers are coming off of a loss of their own against the Chicago Bears, losing 23-17. The Steelers and Ravens will battle for the AFC North divisional lead on Sunday at 1PM.