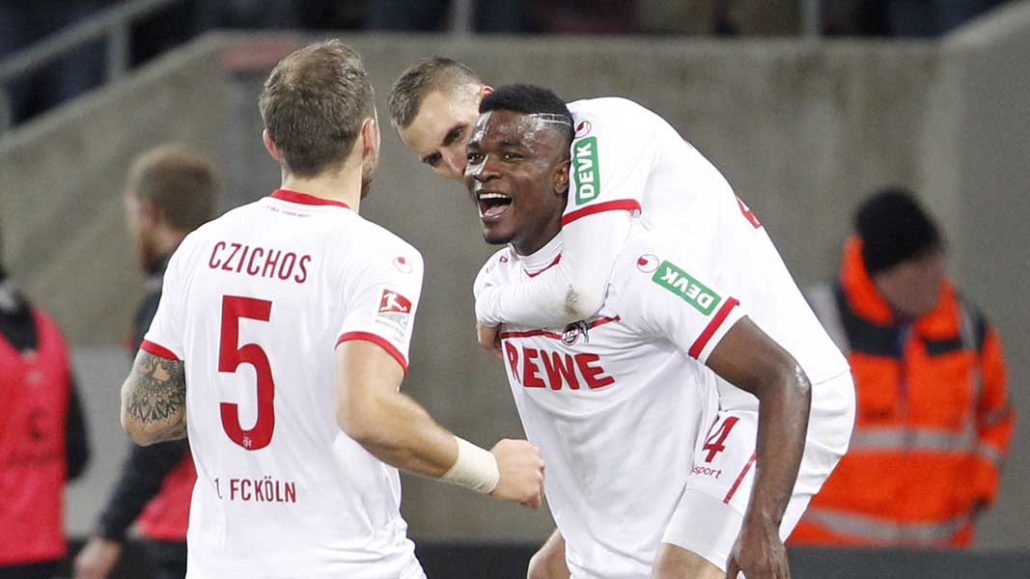 1. FC Köln kicked off their 2019/2020 Bundesliga campaign away with a 2-1 defeat against VfL Wolfsburg at the 30,000 capacity Volkswagen Arena in Lower Saxony. Maximilian Arnold put Die Wölfe ahead after sixteen minutes before Wout Weghorst extended the lead for the home side on the hour mark. However, Achim Beierlorzer’s side added a consolation late in the game courtesy of Simon Terrode.

1. FC Köln’s second match of the new Bundesliga season was at home at the Müngersdorfer Stadion against Lucien Favre’s Borussia Dortmund, last season’s runners-up in the Bundesliga. BVB opened their season with a commanding 5-1 win against FC Augsburg at the Westfalenstadion in North-Rhine Westphalia. Die Geißböcke, however, took the lead in the 29th minute thanks to Dominick Drexler. However, after the break, 1. FC Köln were caught off guard as Borussia Dortmund equalized via a 70th minute finish from Jadon Sancho. 16 minutes thereafter with four minutes remaining until the ninety, BVB clinically added a second, this time from Achraf Hakimi. However, four minutes into stoppage time, Borussia Dortmund put the game beyond reach for 1. FC Köln thanks to Paco Alcacer, who made it 3-1 to Borussia Dortmund.

After taking no points from a possible six in their opening two 2019/20 Bundesliga fixtures, 1. FC Köln then faced SC Freiburg at the Schwarzwald-Stadion in Baden-Württemberg in their third league encounter of the season. However, five minutes before half-time, Die Geißböcke conceded via a Rafael Czichos own goal to give Christian Streich’s side a 1-0 advantage heading into the break.

1. FC Köln responded positively after the break with a 52th minute goal from Anthony Modeste to level the game at 1-1. However, two minutes into stoppage time after the 90th minute, Tunisia international midfielder, Ellyes Skhiri, scored an emphatic game-winner to give 1. FC Köln their first win of the 2019/20 Bundesliga campaign.

However, Marco Rose’s side efficiently took the lead in the 14th minute courtesy of Alassane Pléa, which invariably signified to be the decisive turning moment of the game as Borussia Mönchengladbach claimed the three points and handed 1. FC Köln their third loss from four encounters in the new Bundesliga season.

Prior to 1. FC Köln’s game against reigning Bundesliga champions FC Bayern München, FOX Sports Radio 96.9 FM/1340AM’s Dean Perretta briefly caught up with 1. FC Köln’s Colombian striker, Jhon Córdoba, to discuss Die Geißböcke expectations and targets for the 2019/2020 Bundesliga season, coupled alongside Córdoba touching on technical improvements made during the summer, as well the pressures from the German media.

Dean Perretta: Jhon, 1. FC Köln triumphantly won promotion back to the Bundesliga last season courtesy of winning the 2. Bundesliga by finishing 6 points ahead of runners-up and fellow newly promoted side SC Paderborn 07. However, what are the main goals and ambitional targets for the club in the 2019/2020 season?

Jhon Córdoba: Our goal is to remain in the Bundesliga. It’s important for the club, that we establish ourselves for the long-term in the Bundesliga. When we achieve this, then we can go from game to game and try to get the best out of each match.

Dean Perretta: Three seasons ago in the 2016/2017 season, 1. FC Köln finished fifth place and secured a UEFA Europa League spot. With that being said, especially with the competitiveness of the Bundesliga, can you talk about the mentality and the confidence amongst the players in training camp?

Jhon Córdoba: The past is the past. I don’t want to concentrate on it any more, instead we are putting all our effort and thought into the present – and into our challenges in the Bundesliga. Our team definitely has the confidence and the quality to pass those tests. The mood in the team is good and the manager (Achim Beierlorzer) is very positive. He manages to bring everyone along with his ideas and finds the right mix between fun and focus.

Dean Perretta: How would you describe the overall discipline, core principles and integrity of Achim Beierlorzer from a players perspective?

Jhon Córdoba: Achim Beierlorzer has an exact idea of how he wants to play football – and how he views teamwork within the squad. We players are trying to do that exactly as he wants. Therefore, he does it in a way with a lot of communication – he speaks a lot with us and makes sure that training is fun, so that in the time we’re on the pitch, we are concentrated. That’s worked well so far.

Dean Perretta: As a player, you’ve often been likened to Côte d’Ivoire and Chelsea legend, Didier Drogba, due to your physical traits and accurate thunderbolt shots. However, can you talk about the margins of improvement which you’ve made this summer with regards to your overall technical game and mentality?

Jhon Córdoba: Didier Drogba is a legend. Obviously I’m happy, when people say that I have a similar style. That makes me proud. Essentially, I try to concentrate on myself and to continue to improve. That’s what I did during the summer, in order to work on my strengths and weaknesses.

Dean Perretta: Lastly, with regards to pre-game mental focus and scientific preparation, can you talk about playing under the pressures of the expectations of the club, fans and German national media alike?

Jhon Córdoba: I believe that it’s part of being a professional footballer, that there are expectations coming from those around you. Every player learns that through his or her career. Everyone has his or her own way of dealing with it. There is no recipe for success or formula that you can learn, so that it works all of a sudden. That is something that comes with experience.