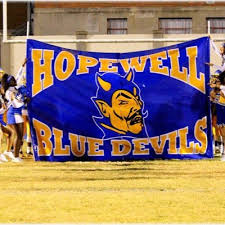 Hopewell ( 3-0) owns the first half of games this year outscoring opponents 87-13!   Although second halves in the last two games haven’t been as productive (13-25), some of that has involved good halftime adjustments by opponents, some perhaps an understandable loss of intensity with big leads, and some the presence of reserves getting valuable playing time.

Last week,  Division 3 Hopewell traveled to Henrico High School ( 2-2) to play the Division 5 Warriors. The Blue Devils burst out of the gate and scored in the first two minutes, finishing the drive with a perfectly thrown 40-yard touchdown pass from Junior  QB Joseph Eliades to wide receiver Tre Henderson( also a Junior).

It was  Eliades’ second TD pass this year – both to Henderson, who would add four additional rushing touchdowns to make it two consecutive games with 5 TD’s.  Against the Warriors, he carried the ball 13 times for 145 yards, and for his three-game total, he is averaging 121 yards rushing per game- approximately 11 yards every time he receives the handoff.

Henderson’s last TD run covered 50 yards, and became the only score Hopewell would get in the second half. It occurred on the very first play after he returned to action following an injury.  While playing defense, he had helped break up a potential touchdown pass in the end zone.

Now Henderson might be the first to credit a magnificent offensive line that consistently opens great holes for Hopewell runners.  A quick internet look to Hopewell,Va. Football Max Preps reveals the kind of work the offensive line has accomplished in each game:  Click “Roster “ in the left column and scroll down to #50 Ronald Webster, #51, Trevion Rains, #68 Isaiah Roberson, #70 Arlie Bowden, and #74 Landon Baker.  You’ll see a film clip icon next to each player which reveals how these players perform a great deal of unselfish work to spring holes for their running backs.

Other Hopewell runners like Robert Briggs ( Jr.)and Kaveion Cox ( Sr.) are probably also quick to point out their appreciation for the talented linemen who pave holes for them.  Briggs came into Friday’s game averaging 107 yards on the ground with 4 touchdowns. While nursing a leg injury, he played only one play against Henrico – a 20 yard run off the right side, and it was helped by great blocking. Cox, who often blocks from his fullback position, carried the ball  8 times for 30 yards Friday night, and on the year averages 6.5 yards every time he carries the ball. He accomplishes this while also leading the team defensively in sacks with 4 from his defensive end position.

The Blue Devils received an initial scare when during Henderson’s 50 yard touchdown run, their Senior Center Roberson left with an injury and didn’t return.  Fortunately, he has been cleared to play next week.

Head Coach Ricky Irby is not only pleased with the  offensive line that helps facilitate an average of 9 yards per carrying for its running backs, but also  the play of new QB Eliades who averages 44 yards on the ground, while in this last game completing almost 70% of his passes ( 9-13) for 96 yards.

Hopewell has also shined defensively and on special teams. Senior  Keyon Williams has led the team each week in tackles ( 10 against Henrico, 31 through the 3 games, and also with tackles for losses for the season with 13.  Seniors Reggie Ruffin, Jacen Fowlkes, Alex Rockwell, Cox, and Henderson are not far behind with 16-19 tackles per game.

Linebacker  Rockwell, again filling in for the injured Kicker Boonsong Paxton, was a perfect 5-5 on extra points.

As the Blue Devils prepare to begin Central District play next week at Colonial Heights, Coach Irby and staff will continue seeking to curb the number of penalties that have limited the effectiveness of both the offense and defense. Next week may also afford increased opportunities for QB Eliades to connect more with his wide receivers. Stretching the field like that will only enhance their running attack, and keep more teams from stacking the line to minimize the run.

So, in conclusion, how valuable are offensive linemen? They are like the servants at the wedding in Cana where Jesus was the guest.  They become the unsung heroes who do the behind the scenes work that leads to the miracle of Jesus turning water into wine. ( Gospel of John Ch. 2)   May the nature of an offensive lineman inspire us in our everyday work: faithfully and conscientiously serving others in order to bring out their best.

Jeff Butler is the Pastor of Woodlawn Presbyterian Church in Hopewell and calls the play by play for each Hopewell Football game over WHAP Radio AM 1340 and 96.9 FM.  You can also listen to each game on your computer at www.foxsports1340am.com and click “Listen Live” , or on your phone by dialing 1-605-313-0571.