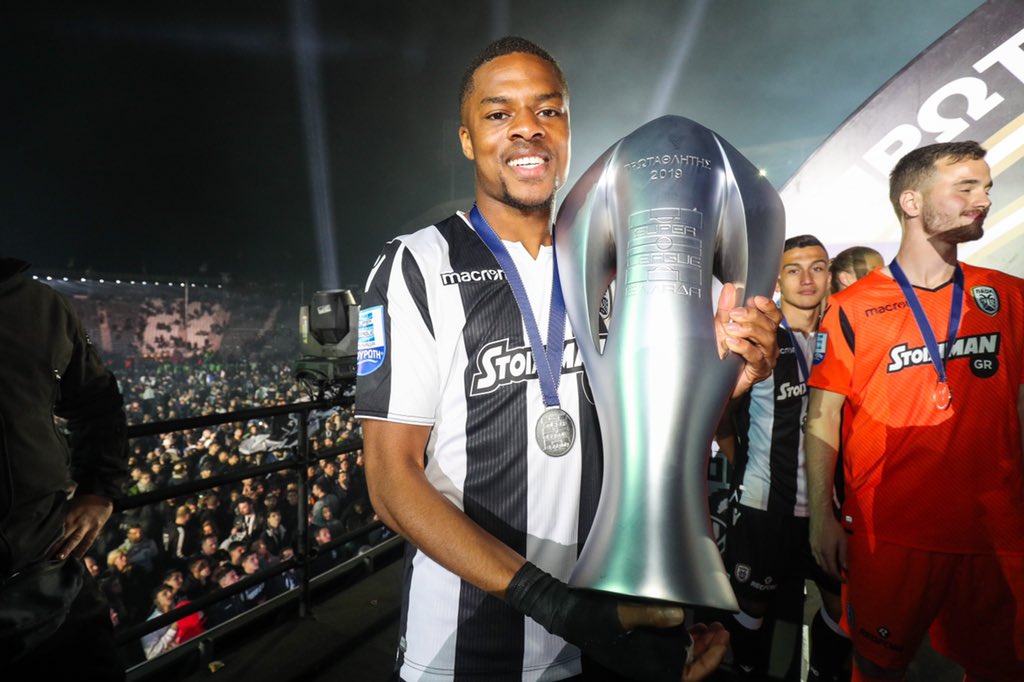 Elsewhere, PAOK were eliminated in the UEFA Europa League qualifying phase and play-off round earlier in the season courtesy of a 3-2 aggregate defeat to Slovan Bratislava.

However, the Aspromavri, the most supported Greek Super League club worldwide on social media with the largest fan base in Greece, have lost once in the league this season under 41-year-old Portuguese, Abel Ferreira. Furthermore, PAOK remains 12 points ahead of third place AEK Athens in the Greek Super League.

Abel Ferreira’s PAOK side, who have lost just once in their last eight matches (a 4-2 loss against Aris on January 4) in all competitions, earned 16 points from a possible 21 in the Greek Super League throughout November and December 2019.

FOX Sports Radio 96.9FM/1340AM’s Dean Perretta briefly caught up with PAOK forward, Chuba Akpom, ahead of PAOK’s much-awaited Greek Cup Round of 16 encounter against OFI to discuss the renewed targets and goals for the Greek powerhouse in the second half of the season, coupled alongside the Akpom’s thoughts on the philosophy of Abel Ferreira and officially pledging his international allegiance to Nigeria.

Dean Perretta: Chuba, after winning both the Greek Super League five points ahead of Olympiacos Piraeus and scoring the winning goal in the 2019 Greek Cup Final against AEK Athens in your first season at PAOK last season, what are now the renewed expectations and goals for the Aspromavri in the 2019/2020 season?

Chuba Akpom: The previous season was a very special season both for the club and me. I never expected to win the Double before I came here. I wanted to help the team be successful, but to win the Double, I’m very proud of this. I helped the team to do it and scored in the Cup final, the feeling was amazing, probably the best highlight of my career so far. We set the standards so high from last year, so in the new season we want to try to do exactly what we have done before. Become Champions again and hopefully go for the Cup once more. It’s not going to be easy, but we are on the right path right now and hopefully we can do that.

Dean Perretta: Winning the Most Valuable Player Award in the 2019 Greek Cup Final was, of course, another fitting tribute to what was a fine first season with PAOK. However, can you talk about the overall improvements which have been made personally since then and, of course, the importance of not losing that desire, intensity and focus to continue improving as a player?

Chuba Akpom: Winning the MVP award in the (Greek) Cup final was a good personal achievement for me and scoring the winning goal was an amazing feeling, an amazing day and something I will never forget. Personally, the most important thing was to win, the whole team to be successful and for me to contribute in order to achieve it. It was a good feeling. I think that from last season I’ve learnt a lot and grew as a player and as a person. I’m a mentally stronger player and I became more tactically aware also I hope to keep progressing in my career and keep learning and trying to play at the highest level possible.

Dean Perretta: Can you touch on playing under Abel Ferreira and indeed the level of trust and freedom which the Portuguese has invested in you based on your solid performances and qualities which you bring to the side?

Chuba Akpom: We do have a new coach. He came with his tactics, which were different to the last season’s and we had to adapt quickly. I hope that we have much success with these new tactics and even more than last years’. I hope that we can go win the title, win the Cup and make a successful season.

Dean Perretta: How would you describe the intensity and demands regarding both technical training and health and fitness application within the PAOK training camp?

Chuba Akpom: The intensity and the demands at training are what you’d see at any top club in Europe. PAOK is fighting to become a team that competes in European competitions, so we need to train like them or even better. As for the demands, to become Champions you need to train and train good, to treat every day like it’s your last and play like it’s your last game, always giving one hundred percent.

Dean Perretta:  Lastly, you most recently officially pledged international allegiance to Nigeria. Ultimately, does this serve as a massive motivation given the Super Eagles healthy competition amongst forwards in the national team?

Chuba Akpom: I just pledged my international allegiance to Nigeria and it definitely motives me to try and press and play every game for my club and help the team as much as possible to get in the (Nigeria) national team because that’s how I’m going to do it. Firstly, I have to fight for my club to get on that team. It’s not going to be easy because there are many young players but I’m up to the challenge and I hope that I would be selected soon. I’m ready to help the national team.