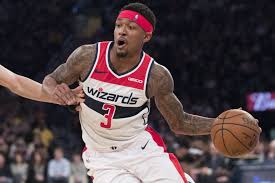 The Washington Wizards were unable to overcome big runs by the visiting Utah Jazz, as they dropped their first home loss in four games. The Wizards (13-26) dropped a 127-116 loss to the Jazz (27-12) Sunday behind Bradley Beal’s 25 point return to the court. Beal has not played since January 1 due to a lower right leg injury. In his first game back, Beal played 27 minutes on the night.

Thomas Bryant also returned to the floor for the Wizards after sitting out 20 games, dating back to early December, with a stress reaction in his right foot. Bryant had eight points in 15 minutes off the bench.

Up 66-55 at the half, Washington went on a run to put them up by as many as 15 in the third quarter, but the Wizards run was not enough to close out the game. Momentum changed in favor of the visiting Jazz as they went on a late 21-3 run of their own to take an 83-80 lead.

Going up in the final 10 seconds of the third behind a layup by Rudy Gobert, the Jazz continued momentum to open the fourth quarter with a 14-5 run. Bojan Bogdanović drove baseline before finishing a layup to extend the Jazz lead to 11. Down by double digits with just over eight minutes left to play, Beal subbed into the game in the final effort to tie it up.

Washington got within three in the final minutes, but were unable to get a much-needed stop on defense and they fell short of ever making a final comeback.

Davis Bertans and Jordan McRae added 18 and 16 points, respectively for the Wizards.

For the Jazz, it was their 9th straight victory and 14th in 15 games. Bojan Bogdanović scored a game-high 31 points as Jordan Clarkson chipped in with 23 points, 17 of which came in the second half. Four Jazz players finished with 20 points or more in the road win.

Injuries continue to sideline a handful of Washington’s players, Sunday it was announced prior to the game, that the team waived forward C.J Miles who had surgery to repair ligament damage days before Thanksgiving. There is no timeline for his return to play.

However, a bright spot behind the injuries was the way Jordan McRae stepped up to for the Wizards. Coming into Sunday’s loss, McRae averaged 19.7 points, 5.5 rebounds and 2.7 assists per game in six games played. The guard was a big part of Washington’s three wins in January, including squeezing out a 10 point Friday night win over the Atlanta Hawks (8-31).

Although, the Wizards were without Bradley Beal, Thomas Bryant, Rui Hachimura, C.J. Miles, Moritz Wagner and, of course, John Wall in Friday, they squeezed out a 111-101 win over their conference rival.

Led by Brandon Goodwin’s 12 fourth-quarter points, the Hawks made their final run to overcome an early 15 point deficit in the game and take their biggest lead of the night. However, the home team responded to close out the game and clinch the win. Trailing by six, the Wizards finished the game with a 24-8 run led by Jordan McRae, Ish Smith, and Ian Mahinmi.

A huge difference-maker in the result came down to rebounds and forced turnovers. The Wizards dominated the Hawks on the offensive boards and second-chance scoring. They grabbed 19 offensive rebounds which led to 23 second chance opportunities and 29 second-chance points.

Washington also had 11 steals and forced 18 turnovers in the game.
Six players finished in double figures for the Wizards as Jordan McRae led the team with 29 points and Troy Brown Jr. added 18.

Hawks’ guard, Trae Young had a tough night offensively going 7-for-20 from the field and 0 -of- 7 from behind the arc. He still led the Hawks with 19 points as six players also finished in double digits for Atlanta too. John Collins (15p, 15r) and Alex Len (10p, 14r) notched double-doubles on the night.

The Wizards are on the road Wednesday night to take on the Bulls for an 8:00 pm ET tip-off at the United Center before taking on the defending 2019 NBA Champions on the road in Toronto Friday night.