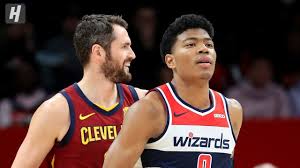 Less than 24 hours after a tough overtime loss, the Washington Wizards (15-29) rebounded to knock off the Cleveland Cavaliers (12-33) by 12 Thursday night.

For Head Coach Scott Brooks and the Wizards, it was a huge accomplishment to win 124-112 over the Cavs given the circumstances. Just one night before, the Wizards dropped an OT loss by five to the Miami Heat (31-13). Six players logged 24 or more minutes in the loss.

With a late flight that led them to arrive after 4 am in Cleveland, the Wizards had no time to focus on the loss.

It was time to quickly rebound and be ready for the Cavs.

Brooks spoke highly of the fight he saw from his players in the win. The Wizards started slowly as expected. However behind 15 of 22 shooting from the field along with eight assists by Beal, the Wizards offense did not look jetlag or tired at all from all the travel.

Davis Bertans and Ish Smith each chipped in with 17 points apiece on the night. The offense was without a doubt cookin’ Thursday night.

The Wizards may have taken a while to get going, but once they did they played impressive basketball. Through depth, having 11 different guys see the floor in the first half and pushing through the adversity of a rough 24 hours, the Wizards rebounded to snap their five-game losing streak on the road.

For Cleveland, it was their sixth straight loss and 11th in the last 13 games including a 20 point loss to the Knicks on Monday. The Cavs host the Chicago Bulls (17-29) Friday night at 8:00 pm.

Up next, the Wizards are on the road for the third straight game taking on the Atlanta Hawks (11-34). The Wizards defeated Atlanta by 10 earlier this month and Friday night, they look to get their second straight win this week.