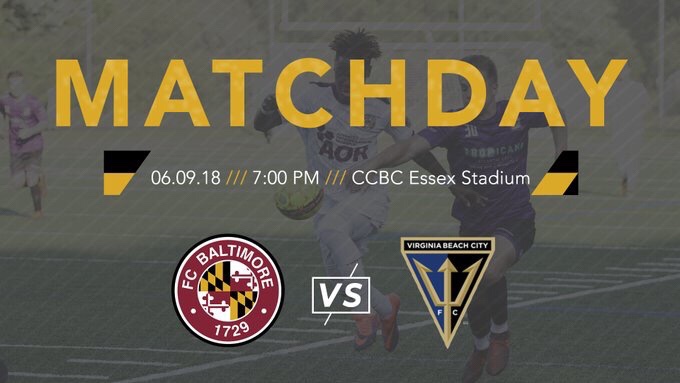 BALTIMORE — FC Baltimore took on Northern Virginia United on Friday. The battle would decide for first place in the Mid-Atlantic Conference, but Baltimore ended up losing the match by the score of 3-0. Baltimore would look to bounce back in their second league game, in as many days.

Around the 7-minute mark, FC Baltimore forward Tunde Akinlosotu almost scored on a pass from midfielder Lucas Mendes. Akinlosotu’s shot went off of the crossbar.

Soon after around the 7:00 mark, goalkeeper Quantrell Jones made a save, clearing the ball out of harm’s way.

In the 30th minute, Virginia Beach City answered with a goal from defender Sebastian Refi. The goal was a screamer, going into the top right corner of the goal past Jones.

In the second half, Baltimore was able to get the equalizer in the 61st minute. Akinlosotu passed the ball to Nate Hall, who finished. This goal ended Baltimore’s 246-minute goal drought and tied up the match.

Jones made another save in the 66th minute. Just one minute later, Denis Roule made a run on Baltimore’s goal. However, Baltimore defender Cale Thorne made an important tackle, protecting Jones.

Baltimore had a scare in the 70th minute, with a run made by Virginia Beach City’s Tyequis Stallins. However, he kicked the ball wide of the net, despite having what seemingly was a walk-in goal.

Things got a tad chippy in the 75th minute, with Dao getting physical with a Virginia Beach City defender. It would lead to a yellow card on Dao and he wouldn’t take to kindly to it. Dao would be joined in discussing things over with the official with Thorne. Jones then made another save in the 77th minute.

Jones continued to stand on his head in the 84th minute, making one more save. Thorne took a ball off of the face during the 87th minute, causing him to leave the game. In extra time, Jones made his final save of the game in the 91st minute. During that same minute, Thorne re-entered the game.

Winding down to the 94th minute, Baltimore drew with Virginia Beach City 1-1.

Baltimore head coach Brandon Quaranta was pleased with his team’s effort, despite not earning all three points had the team secured a win. The club was able to secure a point with a draw against Virginia Beach City, after losing a match on Friday. The team also was shorthanded, with a number of usual starters not making the trip back to Baltimore.

“I think it’s a well-earned point,” Quaranta said. “In the end, we were short-rostered again, with only three subs. Five guys that started for us last night were unavailable, due to injuries and different things. So, I think a point is never what we desire, right – we always want three – but the way the game played out, especially trailing into the midway of the second half, we’re past that. The fact that we got the goal and I thought we were the team pushing a bit late, I’m happy with that, especially the effort level in the second half with tired legs.”

Hall had a very strong match for FC Baltimore and dropped in the game-tying shot. Much of the season, Hall has provided the spark for the club on offense and defense.

“Nate [Hall] is everything that we’ve been talking about, that we haven’t had enough this season,” Quaranta said of his forward. “A guy that’s just a tireless worker – will grind, will make the ugly plays – that’s what Nate stands for. When an opportunity pops up, he has the capability of putting it away, he always has.

“I’ve known him since he was 12 years old and he’s always been the same player and that was a big goal for us. So, Nate is a fantastic guy. He’s a guy that’s gonna see more time as the season goes on because he’s making plays for us.”

Quaranta also discussed what happened with Dao and Thorne’s discussions with the officials and his thoughts on that play.

“I only saw the end of it,” Quaranta said of Dao’s yellow card. “I saw two guys get tangled up and there was some tussling and rolling around. To be honest, I’m not sure what happened. For me, that’s a situation where they both get cautioned [Dao and the opposing player], but the ref’s right there, so I have no idea.

On Friday, Baltimore will take on FC Frederick, another Maryland-based club in the National Premier Soccer League for the first time in club history.

“It’s the first time we play them,” Quaranta said of the upcoming match. “We need a good week of training. I just talked to the guys, we’ve been a little short-numbered at training. So, we gotta get out there, we gotta turn out on Tuesday and Wednesday and get two good 90-minute sessions to prepare and we’re going into the second half of the season – we have a little better understanding of the league now. I think the best soccer is ahead of us.

“Obviously, getting a result in Virginia Beach and tying them here – a team that we’re going to be competing with playoffs for – four points against them is welcome.”