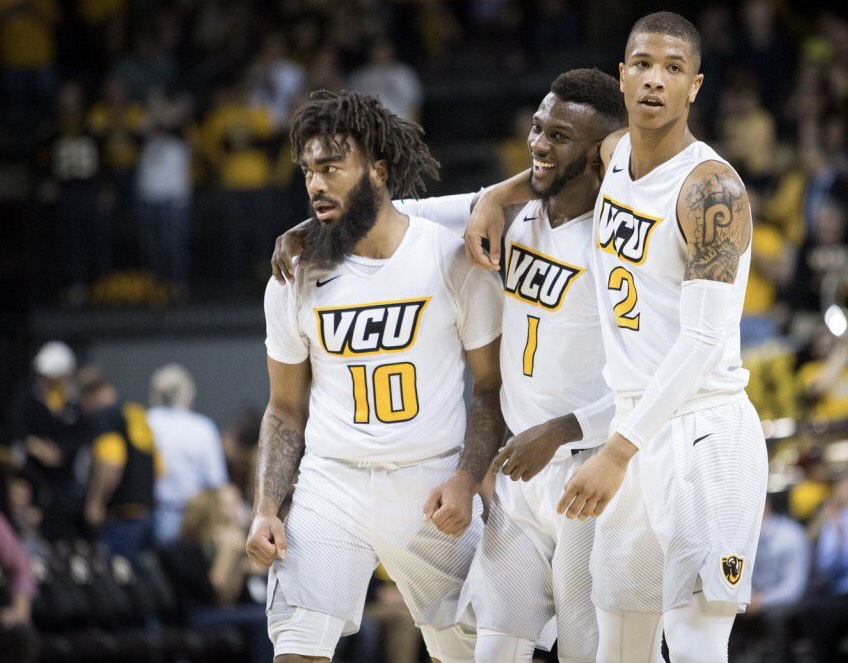 2017 marks six years since VCU’s improbable run to the Final Four. This magical tear through the NCAA Tournament saw Cinderella, VCU, take down Georgetown, Purdue, and Kansas by double digits. The run was later halted by Butler, but VCU became one of a handful of mid-major schools to make it that far in the tournament.

After the dust settled on who was seeded where VCU is shown to be in a very good position. The Rams are in the West region, so obviously, a con for them is the distance away from home. If anybody knows VCU, they know their fans travels. In the A-10 Tournament, which was held nearly 400 miles away in Pittsburgh, Pennsylvania, the Rowdy Ram fans were out in full force. At times, the PPG Paints Arena sounded like the Siegel Center.

The benefit from this region that VCU was put in has many factors within it. For starters, Gonzaga, who is the 1 seed in this region, is the weakest of all the other 1 seeds. Yes, Gonzaga only lost one game this season, but when your schedule is against teams like Portland, Pacific, and Pepperdine, it’s understandable why they had so many wins.

Another reason VCU benefits from this region is the fact that the 3 seed and 6 seed are very inconsistent, especially in the NCAA Tournament. Some may wonder why those seeds were picked. The reason is because that’s who VCU has a high chance of playing if they reach the Sweet Sixteen.

Florida State and Maryland, who are seeded that way respectively, have made the tournament nine times in the past ten years. In those appearances, the two teams haven’t made it past the Sweet Sixteen. The last time Florida State made it to the Sweet Sixteen, they lost to VCU. Florida State hasn’t made it to the big dance since 2012. That means that nobody on their team currently has ever been there. Experience is needed, especially this late in the season.

Let’s take a look at the possible matchups VCU may see in the NCAA Tournament.

VCU faces off with Saint Mary’s (CA,) that they know. The Gaels are a very good defensive team. In the 16-17 season, Saint Mary’s held their opposition to 56.5 points per game. They not only handle their business on the defensive side, they can light it up offensively. The Gaels are led by Center Jock Landale who averaged 16.8 ppg and 9.3 rebounds per game.

Will Wade and his bunch played a team similar to this three times this season. That team was the Richmond Spiders. Led by Center TJ Cline, the Spiders average 74.1 ppg and can shoot the lights out at any given moment. The outcome from all three meetings this year between VCU and Richmond saw the Rams come out on top each time.

VCU will play Saint Mary’s who are very similar. In each game against Richmond, VCU went to the paint offensively and tried to get their best player in foul trouble. It worked three times this season, VCU will be looking to make it a fourth.

The Rams, nor will anybody else, won’t know who they could potentially play until Thursday is over. There is a great chance though that they play Arizona. This will be the Rams biggest competition of the Tournament until they potentially make it to the Finals Four. Arizona and VCU are very similar teams. They pound the ball down low to open up outside shots when needed. The two teams also play defense very well.

The difference between the two teams is the competition they played. Arizona played the likes of UCLA, Oregon, and USC this year twice. All of which made the NCAA Tournament this year. VCU was able to play Baylor, Dayton, and Rhode Island, but those teams don’t match-up to the three aforementioned teams.

Arizona seems to do one thing that can hurt them in this tournament. The Wildcats seem to play down to their competition. What I mean by that is simply Arizona doesn’t seem to. Give 100% when they are facing mid majors or lower. Two games come to mind this season in which Arizona did this. When facing Santa Clara and Grand Canyon, Arizona won by 10 points or less. Many may see 10 points and believe that was a good win, but against a smaller school that took them to the wire, that can get Arizona in trouble in the tournament.

It’s one thing to have to guess between two teams on who you have to play next. It’s another when you have four possibilities. VCU, if making it to the Sweet Sixteen, will play either Florida State, Maryland, Xavier, or Florida Gulf Coast. Either of these. Four teams VCU matches up well with. We talked about Florida State and Maryland earlier. Both teams had good seasons, but the Seminoles have no players on their team with NCAA Tournament experience. Maryland, who started the season an impressive 20-2, dwindled down the stretch going 4-6. They are not at the most important part of the season and that can sneak up on them.

Xavier, who plays in the ultra-competitive Big East, is in the same boat Maryland is in. Xavier started the season off well, but has lost seven of their last ten games. Heading into the tournament losing like that is not the way to go. The team is lacking confidence and if VCU does meet up with them in the Sweet Sixteen, the rams will be able to pounce.

The two likely teams VCU will face in the Elite Eight will be either Gonzaga or Notre Dame. Gonzaga was discussed earlier, as they are the weakest 1 seed. They have played a few tough teams, but most have been cake walks. In fact, 15 games that Gonzaga played in were against a team that won 15 games or less.

Offensively, Gonzaga is one of the best in the nation. The Bulldogs average over 80 ppg. The team has size as well, but VCU has seen that all year.

Rest of the NCAA Tournament for VCU

If VCU makes it to the Final Four, they will be going against the best of the best. The possibilities range from Kentucky to Duke. The good thing for VCU is, if there was a region where they can thrive in, it is the West. They are setup to make a run, even if the rest of the world doesn’t see it. VCU shocked the nation six years ago, they are due for another one. Watch out America..