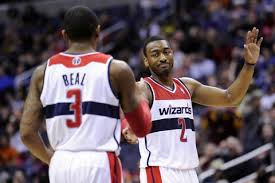 After going 4-1 on their road trip, the Washington Wizards returned home for a disappointing loss to the Dallas Mavericks.  This is the second time Washington has lost back-to-back games in three weeks.

With playoff positioning on the line, both teams started off hot.  Washington scored 39 points in the first quarter, but Dallas was close behind with 32 points.  Bradley Beal led the way with 12 points in the first.  Dirk Nowitzki continues to add to his career points and led Dallas with eight points.

In the second quarter, both squads were worn out and cooled down.  The Mavericks slightly outscored the Wizards 21-18 in the second.  Despite an attempted comeback, Washington still led by four points at halftime.  Bojan Bogdanovic provided a spark off the bench with 12 first half points.  Devin Harris had ten points off the bench for Dallas at half.  Towards the end of the second quarter, all Washington fans were holding their breath.  On a missed lay-up attempt, John Wall landed awkwardly on his left ankle and hopped into the locker room.

Wall started the third quarter off despite his ankle injury.  Wall led Washington to outscoring Dallas slightly 23-20.  He had 13 points and 11 assists following the third quarter, but the Wizards only led by seven going into the fourth quarter.  Harrison Barnes got hot for Dallas up ended with 21 points going into the fourth.  The Wizards were looking at another game they would have to win in the fourth quarter.

With Washington relying on their bench, Dallas took advantage and started off on a 16-7 run.  This run gave them an early two-point lead half way through the period.  As the quarter went on the Dallas got hotter while Washington got cooler.  They outscored the Wizards 24-7 to start the final period. Washington came back with a 18-11 run to cut the lead down to three after being down 10 points.  The end came down to a game of free throws.  Although Dallas missed many and gave Washington a chance, they could not convert.  The Mavericks outscored the Wizards in the fourth quarter 39-27 to hand them their second consecutive lost.

Barnes led the Mavs with 22 points and nine rebounds.  Nowitzki finished with 20 points and Seth Curry had 19 points.  Wall led with 26 points and 11 assists.  Beal had 24 but only had seven in the second half.  Otto Porter, Jr. had a nice stat line with 14 points, 10 rebounds and five assists.

Are the Wizards in Trouble??

It is kind of early to say that Washington is in trouble, but they are.  They just lost to two teams that did not have key players in their lineup.  Dallas released Deron Williams and did not have Wesley Matthews who had a hamstring injury.  The Minnesota Timberwolves were without Zach Lavine who tore his ACL.  Both teams were under .500, which means it does not get any better from here.

Their next opponent is the Chicago Bulls, where Washington leads the season series 2-1.  Washington will be at home where Wall hit a game winner last time to give them a two-point win.  The one time the Bulls won, Beal and Wall did not play.  The Bulls frontcourt will be the Wizards main focus.  Rajon Rondo, Dwyane Wade and Jimmy Butler are a force to be reckoned with.  All three are good defensive players and can contain the perimeter and inside.  Rondo was inserted back into the starting lineup last game and the Bulls got a victory over the Charlotte Hornets.    This team is making a late playoff push and are half a game out of the playoffs right now.

Washington started this game well but went back to their old ways of ending bad.  They need more than just Bogdanovic from their bench to come through.  When the starters come out, the team falls apart.  Scott Brooks may have to make changes in the rotation of when starters enter and leave the game.  If Washington can play better defense and end the game well, they should make up for a home loss with a home victory.