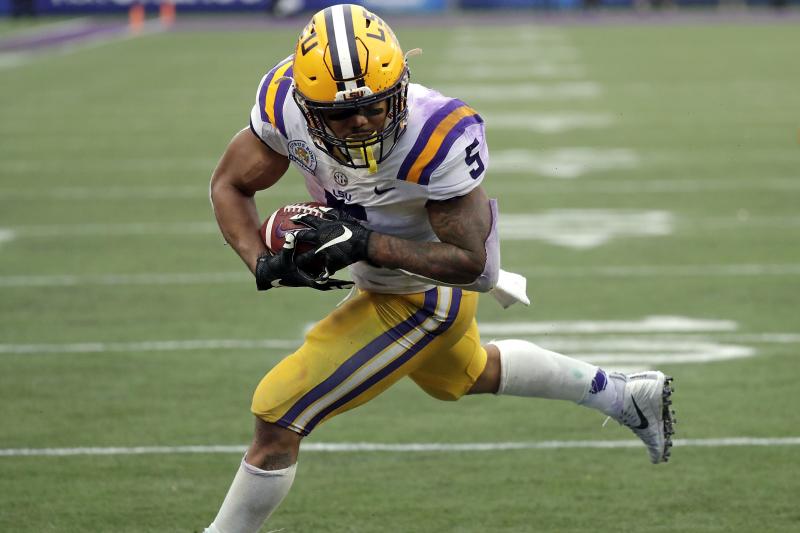 The 83rd annual draft meeting is within three weeks and all thirty-two teams are preparing to select the best available prospects to fill in crucial needs. The Washington Redskins like many other teams, still have a glaring need at the running back position.

Washington hasn’t had a consistent running back since Alfred Morris, and struggled to find a starting back in the committee of Samaje Perine, Chris Thompson, Rob Kelley and Karpi Bibbs last season. Washington have already made new changes to their offense which included the acquisitions of Alex Smith and Paul Richardson and are looking for a game-changing back to add to the puzzle. Here are my five running backs Washington should look at this loaded draft class:

In his three years in Baton Rouge, Derrius Guice has shown he is the most complete back in this draft. In his last two seasons at LSU, he amassed over 2,600 rushing yards and 26 touchdowns on 420 attempts. Guice has also notched two Citrus Bowl MVP awards in that span. Just like his former teammate Leonard Fournette, Guice is a hard-nosed runner who has strength, speed and durability to last in the league.

Even though there was ridiculous speculation about his sexuality being asked at the combine in February, Guice has the talent to be a three-down back in this league and is rumored to be a first or early second pick in April. If Jay Gruden wants star potential at runnning back, Derrius Guice is the guy for him.

Sony Michel is maybe the most intriguing prospect in his draft class. Even though he wasn’t a three-down starter at Georgia, Michel still show ability of being an all-around elite back in the pros. In his four seasons in Athens, Michel finished his collegiate career with 3,638 rushing yards, 33 touchdowns and 6.3 yards per carry. Last season, Michel partnered up with teammate Nick Chubb and together they became the best RB duo in the country. He rushed for 1,227 yards and 16 touchdowns on 175 attempts en route to a national championship appearance. Michel will be a great starter in the league and can quickly contribute in a committee in the league. A Michel, Perine and Thompson will be something special in D.C.

Ronald Jones II is the type of running back the Redskins should look at. Jones has shown ability of being a shifty runner able to handle defenses in the NFL. In his three years at USC, Jones has rushed for over 3,600 yards and 39 touchdowns. Jones amassed his best season of his collegiate career in his junior year. In 13 games, Jones rushed for a career high 1,550 yards on 261 attempts and found paydirt 19 times over the course of the year. Jones will be an excellent fit in Gruden’s West Coast offense plus a Samaje/Ronald duo will be pretty similar to Alvin Kamara/Mark Ingram in New Orleans.

Michel’s partner in crime Chubb has all the ability to be a force in the pros. In all of but one season in Athens, Chubb rushed over 1,000 yards and over 8 touchdowns. As like Michel, Chubb did rush for 1,000 yards (1,375) and scored 15 times last season. Even though Chubb did tore his ACL in 2015, his ability to break tackles with his big, physical frame and decisive running should intriguing many scouts including the Redskins.

The FBS leading rusher in 2017, Penny’s stock is definitely rising in the past few weeks. In his senior year, Penny amassed over 2,000 (2,027) on nearly 300 attempts and scored a whopping 23 touchdowns in his campaign. Even for his big frame, Penny is a downhill runner who can show his burst of speed, quick feet and his decisive is Penny’s ammo. Penny will be a deadly two-down back in a zone-blocking scheme and Washington would be a perfect place for him.