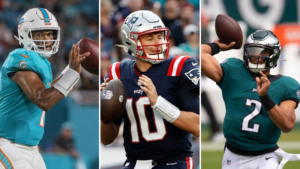 Week 2 of the NFL season is here! The University of Alabama is known for its talented players and right now there are three quarterbacks we should be watching in the NFL.

Tagovailoa’s first season stats were 1,814 passing yards (64.1%), 11 TD/5 INT, 109 rushing yards, 3 TD, and 10 GP. Week 1 was a close call for the Dolphins, but they were able to pull off a win (MIA 17- NE 16) against the New England Patriots and Mac Jones (former Bama player). Many expect Tua to continue to grow during this season after the work he’s put in during the off-season. The Dolphins will have their home opener today against the Buffalo Bills at 1:00 PM.

Hurts is also entering his second season with the Eagles. His first season stats were 1,061 passing yards (52%), 6 TD/4 INT, 354 rushing yards, 3 TD, and 15 GP. Week 1 brought a 32-6 victory against the Atlanta Falcons. This season, Hurts will be reunited with former Bama teammate and 2021 Heisman Trophy winner, Devonta Smith. The Eagles will have their home opener as well against the San Francisco 49ers at 1:00 PM today.

You can watch the Bills v. Dolphins and 49ers v. Eagles matchups on FOX Sports this afternoon!