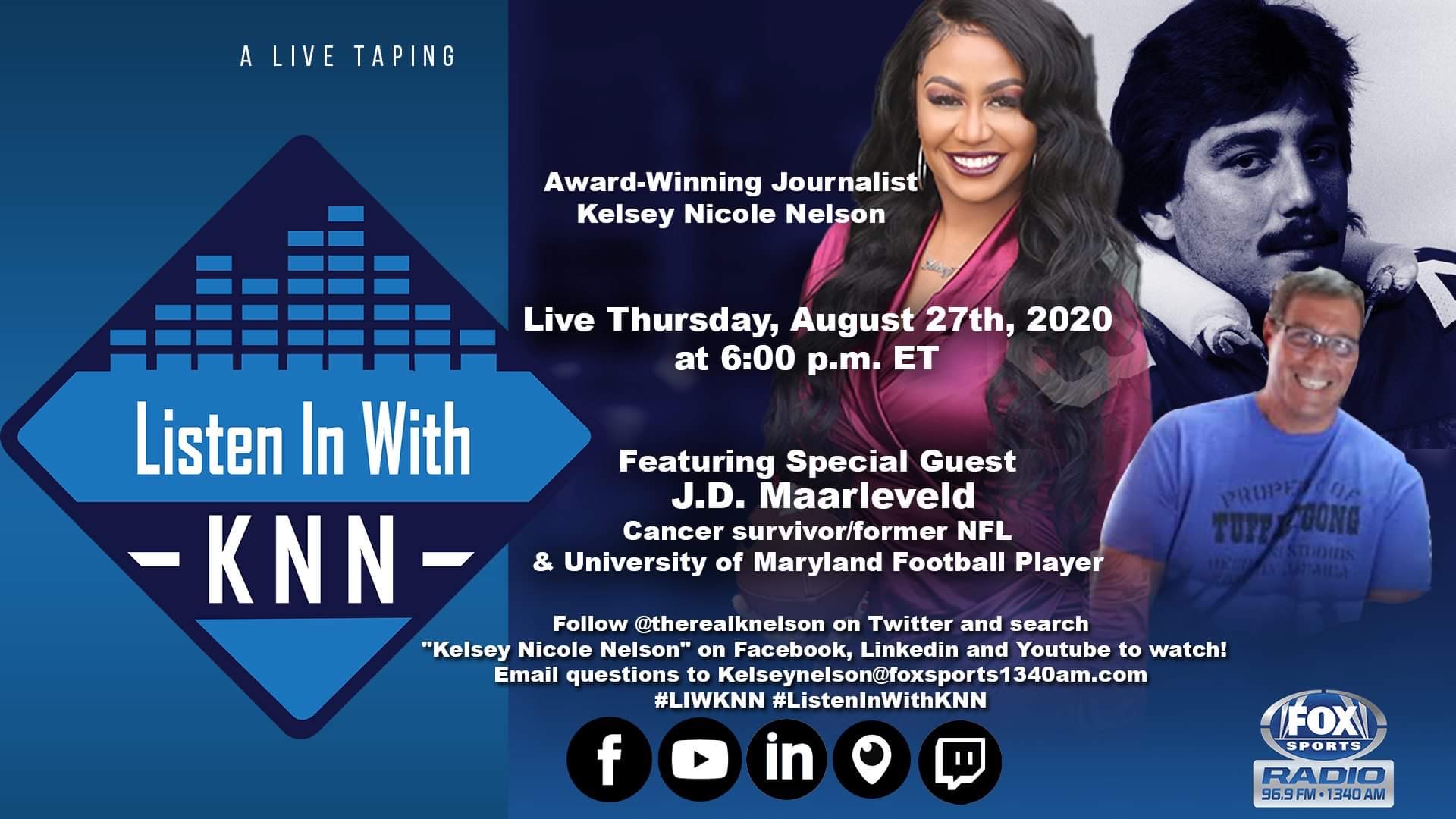 On the latest episode of Listen In With KNN on Fox Sports 1340AM, host Kelsey Nicole Nelson welcomed former University of Maryland and NFL offensive lineman J.D. Maarleveld to the show.

The Jersey City, New Jersey native attended Notre Dame where his life took an unexpected turn. After his sophomore year ended, he was diagnosed with Hodgkin’s lymphoma.

“It was difficult but I was fortunate to have a lot of friends and family. I just kind of put my head down and took the chemo, radiation, listened to the doctor and try to keep working out,” said Maarleveld.

He was cleared of cancer but one year later got more bad news as he was informed that his spot on the team was no longer available. That decision devastated Maarleveld.

“It’s hard to say no to Notre Dame with all the history, national championships and the Heisman Trophy winners. I worked out everyday except Monday due to chemo. It was devastating because I thought I was doing the right things and Coach (Gerry Faust) would be proud of me,” he said.

As a result, Maarleveld transferred to the University of Maryland to play under head coach Bobby Ross from 1984 to 1985. He became a consensus first-team All-American, first-team All-ACC and the recipient of the Brian Piccolo Award for overcoming adversity. Being at UMD felt like home for Maarleveld.

“Lenny Lynch and Brian Covington were my first two real friends there and we were close with the offensive lineman. Coach Ross was great and a gentleman. The best compliment I can give him is if my son was a football player, I want him to play under him because I know he would be treated like a man,” he said.

During his time at Maryland, he encountered another Terrapin star athlete by the name of Len Bias. He was an All-American basketball player and got compared to Michael Jordan. Unfortunately, Bias died of drug overdose two days after being drafted by the Boston Celtics in the 1986 NBA Draft.

“He was a wonderful guy and always smiling and friendly. You walk through campus and everybody saying ‘hey Lenny.’ In basketball, he was better than MJ and so much fun to watch and play. Go to a game and he drops 40 points and see him at lunch the next day busting him about his jump shot,” he said. “Back in the day, a lot of people did cocaine and partied. I didn’t expect that to happen and it was horrific.”

Maarleveld was one of six Terps selected in the 1986 NFL Draft when he was picked by the Tampa Bay Buccaneers in the fifth round. Despite his two year professional career, the one thing he cherished was being with his teammates.

“There were some nice guys and it was a shame because it was just a downward spiral and ownership was not great. They’re changing the coaches during the season and it just was difficult. You’re there to win and when you’re not winning, it’s not fun,” he said.

Maarleveld’s advice to recruiting a player is to be comfortable wherever he is.

“I still have a lot of friends from Notre Dame and still in touch with a lot of those guys. I loved my time at Notre Dame but I was much more comfortable at Maryland.”